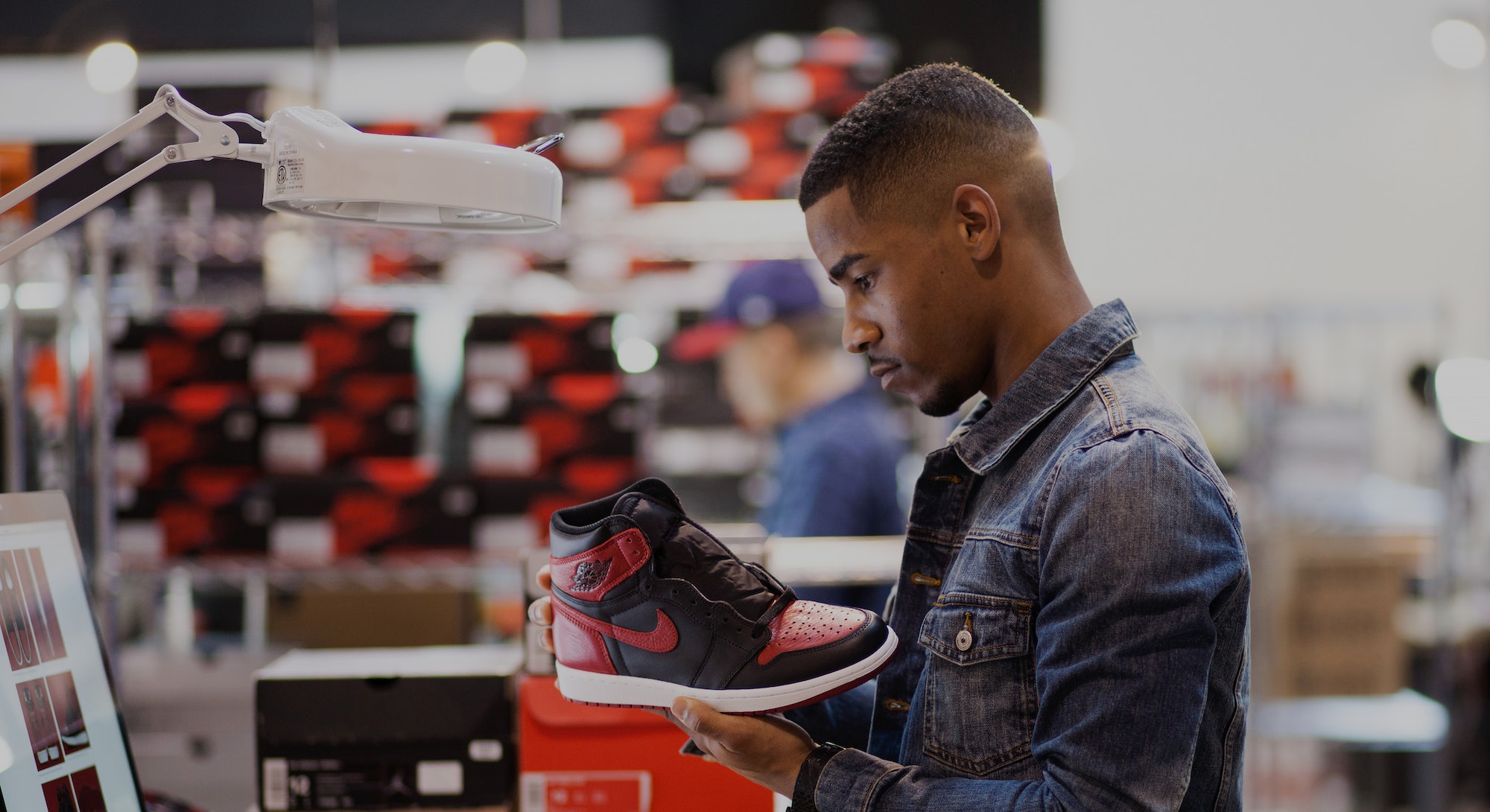 In the middle of March, with the threat of a global pandemic imminent, the world’s economy was in complete free-fall. From technology to fashion, industries everywhere braced to face financial uncertainty in the months to come, as normal life came to a halt in order to prevent the spread of the novel coronavirus.

COVID-19 forced companies to shut down their physical retail operations temporarily, while consumer spending habits shifted due to layoffs and the need to save money for essentials including food, toilet paper, and, of course, hand sanitizer and antibacterial wipes. The sneaker resale market was one of those businesses that didn’t appear to be immune to the effects of the virus, which was signaled by sudden price drops of hundreds of limited- edition sneakers. But that trend was short-lived, or so it seems, and perhaps was only a knee-jerk reaction from sellers caused by the initial panic of whether or not people would be buying sneakers (of all things) at the time.

With stores worldwide closed, online shopping became a haven for consumers who were spending more time than ever before locked down at home. Brands like Nike and Adidas kept doing drops on their apps, and sneakerheads flocked to them to add to their personal collection or resale on sites like StockX and GOAT.

Founded in 2015, GOAT began as a platform where people could easily buy and sell highly coveted and general release sneakers, but it has since expanded to offer apparel and accessories from the hottest streetwear brands, such as Supreme and Palace. GOAT’s CEO Eddy Lu describes his company, which has over 20 million users and is available in 164 countries, as a “global platform for style.” For him, the business strategy goes beyond sneakers and reselling; it’s about letting people use GOAT to dress from head to toe, give them access to contemporary, avante garde, and luxury brands in one place, and leverage all of these elements to become a primary market — not just a reseller.

“We're called GOAT, Greatest Of All Time. We want to make people feel the greatest and it starts with just what you wear,” Lu told Input in an interview. “And so when we started with sneakers, we're like, ‘We're not going to get into this thing where we lose focus and do a bunch of things poorly, we're going to do one thing right.’” After sneakers, the natural evolution for GOAT was to get into apparel and accessories, an effort that started in 2019 as a way to deliver more variety to streetwear aficionados.

Lu added that the challenge for GOAT now is to not lose sight of its main focus: style, the one area where it hopes to reach and create a connection with consumers. He said that, unlike “some other companies, we’re not a transactional marketplace,” noting that every move GOAT makes is designed to stay core to its mission of being a style platform and “making people look and feel good” with sneakers, clothes, and other gear. “Some other companies are more transactional marketplaces where it's not about building a brand and standing for something,” he said. “It's more about the dollars and cents and that's totally fine. There's definitely a market for that.”

While Lu didn’t mention StockX (or eBay, which is now investing heavily in the sneaker resale space), it’s not hard to distill his words about the competition. StockX, the embattled company that suffered and tried to hide a major hack last year, considers itself the “stock market of things” and is quickly looking beyond shoes and apparel. Although StockX became known as a resale marketplace for sneakers and streetwear, the site has now expanded to allow buyers and sellers to post items such as holographic Pokémon trading cards, Nintendo Switch, and most recently, Apple Airpods.

In a recent press release, StockX said that despite COVID-19 it recorded the two biggest buyer months in its history between May and June of 2020, with 18 of its top 20 sales days ever coming in that timespan. “While a lot of traditional brick-and-mortar retailers in our space have obviously suffered setbacks, we really didn’t miss a beat and have been accelerating over the past two quarters,” Jesse Einhorn, StockX senior economist, told Yahoo Finance earlier this week.

Of course, the news that business is great for StockX comes on the heels of the company laying off 12 percent of its staff in April, a drastic cost-cutting measure it took as it races toward profitability and becoming a publicly traded firm. “As a global startup that has experienced hypergrowth, it is important to reflect and pivot to capitalize on future operations,” StockX CEO Scott Cutler said at the time. “For StockX, this means a shift from a growth-focused mentality to one rooted in operational efficiency.”

“Other companies are more transactional marketplaces where it's not about building a brand and standing for something.”

Lu, for his part, says the question of whether GOAT is aiming to go public comes up a lot but that’s it’s not a main concern right now. “We’re still focused on building the greatest experience we can,” he said, “whether that be through our product, technology or storytelling.” That includes continuing to invest in core parts of the business, like its authentication system, as well as experimenting with features such as augmented reality that let people “try on” sneakers at home directly from the GOAT app.

Authentication, in particular, is high on the priority list for Lu and GOAT — because if customers aren’t getting legit pairs of shoes or clothes, then the whole operation is flawed. Lu said GOAT was founded on the premise of building a marketplace to help people find authentic sneakers, as other platforms at the time (namely eBay) were doing a poor job of mitigating fakes from being sold. And the root of the idea for GOAT is personal, since it started after his co-founder, Daishin Sugano, bought a pair of Air Jordan 5s online that he thought were real but ended up being duds.

“He was talking to me about it. And we were just like, 'We know the space, we know how to build great tech products,’” said Lu, who comes from a computer science background, about his relationship with Sugano. “Why don't we build a marketplace based on trust and safety so that no consumer has to ever have the experience that you just had of spending hundreds of dollars on a pair of shoes and get something that's not authentic.”

Since day one, what that has meant for Lu and Sugano with GOAT is to build a network based on trusted sellers.

If you want to sell sneakers or any apparel on GOAT, for instance, you first have to be approved by a team that looks into your personal Twitter or Instagram account to ensure you’re an actual person and that you have a history of selling goods online. Then, before someone posts an item for sale, they have to send pictures to GOAT, which uses a combination of image recognition and machine learning to spot details that will ensure its authenticity. The final step in the process comes when the sneakers or clothes arrive in one of GOAT’s authentication centers across the world, when they’re inspected one last time by a human before they get shipped to the buyer if there are no issues with the product.

Lu told Input that, in 2019 alone, GOAT prevented $72 million worth of fakes from being sold on its app — and as sneakers and streetwear become increasingly more popular, he says, the key is to ensure that authentication remains “the heart and soul of what we do.”

GOAT isn’t just invested in being solely a digital service, either. In 2018, the company acquired Flight Club, the iconic sneaker consignment shop that was established in New York City (arguably the mecca of streetwear) more than 15 years ago. Lu says that, as beneficial as it is to be an online marketplace in this day and age, the in-store experience simply can’t be replaced, and that’s where the merger with Flight Club comes in. “Shoes are such a tactile experience,” he said. “You want to see it, smell it, try it on, etcetera. So even though things are moving digital, and we're trying to replicate things on the digital spectrum [with] augmented reality, there are things that you can't replicate.”

Still, with stores having to close down and people spending so much time at home, being an online-first offering has its benefits. Lu said that, aside from shutting down Flight Club stores temporarily, GOAT’s business has actually seen growth thanks to some interesting trends. Right around the time ESPN was airing its long-awaited The Last Dance documentary, based on Michael Jordan and the Chicago Bulls, Lu says sales of Nike Air Jordans increased 68 percent on GOAT — an unexpected boom during the pandemic.

In addition to the increased interest in Jordans, Lu said what has also helped GOAT is teaming up with brands like Versace and Chloe on sneaker drops, which is part of what he refers to as turning GOAT into a “primary” marketplace, plus the steady sales of less hyped sneakers. Interestingly enough, according to Lu, 40 percent of GOAT’s revenue comes from sales of general release sneakers, meaning that people aren’t only using the app to buy and sell the most hyped sneakers. “Our business has been really resilient for the time and we've been really thankful as a company to come out of this pretty well,” said Lu.

One of the problems ahead for Lu and GOAT, however, may be that the sneaker and streetwear markets are quickly becoming saturated. Even people like Virgil Abloh, the founder of Off-White and Artistic Director for Louis Vuitton menswear, have floated the notion that streetwear’s time “will be up” soon. It’s a thought worth considering for Lu, and what that bubble bursting could mean for the viability of GOAT’s business, although he believes that won’t happen anytime soon.

“With the evolution of technology, especially with mobile platforms like ours, sneakers and sneaker reselling has become more accessible to everyone,” Lu said. “This has helped fuel the growth of the industry over the years, and with new sneaker markets continuing to emerge globally, we anticipate this growth to continue for years to come.”