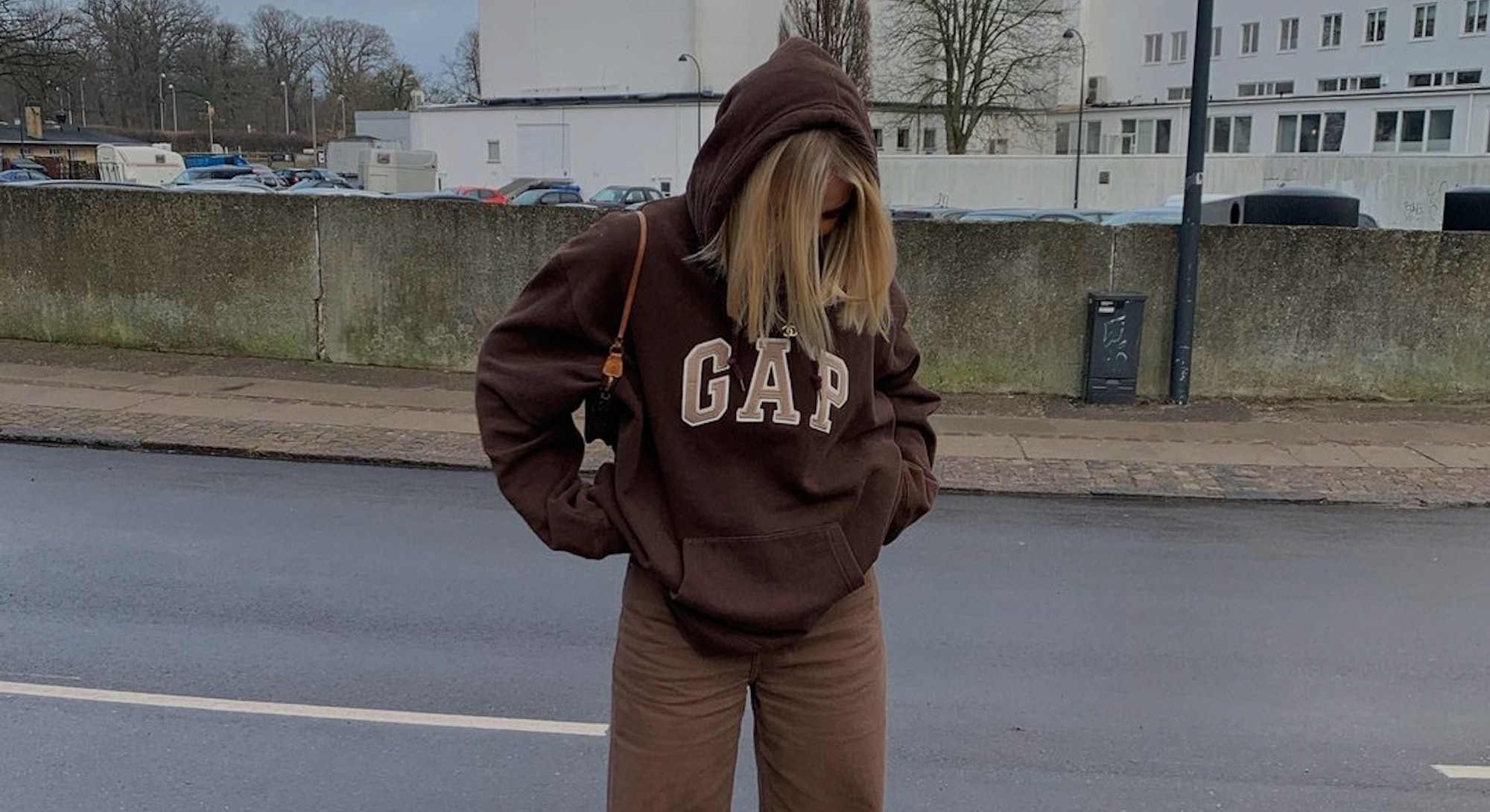 It’s hard to be surprised at the side effects of fashion’s constant aesthetic recycling, but it’s safe to say a Gap hoodie revival was the last thing we saw coming. Y2K fashion is here to stay, it would seem, and now we’re getting into the deep tracks of basic America apparel that has been given a new life.

Gap’s logo sweatshirt, arguably the MVP of early-aughts elementary school outfits, is all grown up and double-dutching its way through the fashion bubbles of TikTok and Instagram. While seeing any Gap-branded piece on a top-tier influencer would probably be confusing — its shopping mall roots are far from elusive drops or designer sponsorships — a brown hoodie in particular has become one of this year’s first viral trends.

Towards the end of 2020, Gap hoodies started popping up in some of Instagram’s most powerful ‘fit pics. Emma Chamberlain sported a blue Gap hoodie in front of her 12 million followers in September, while macro-influencers like Barbara Kristoffersen and Ruby Lyn styled the brown pullover in January. By February, Gap hoodies were making the rounds through Pinterest boards and outfit-roundup Instagram accounts.

It didn’t take long for the trend to hit TikTok, where it spread like wildfire. Style influencers like @brsiany started flexing Gap hoodies in “outfit of the day” videos, while fashion commentators like @imjessgraham included them in 2021 trend predictions. Thrift-shopping accounts like @needforbreed now boast Gap hoodies as grails (AKA must-haves) in their haul videos, while others reveal where to find them for cheap on sites like eBay. TikTok’s #gaphoodie feed has 3.3 million views and counting.

Thanks to the booming thrift-to-resell game, and the steady resurgence of ‘00s fashion — both fueled by Gen-Z influencers and TikTok stars — the Gap hoodie has created its own micro-economy in the second-hand market. For context: The “Gap Arch Logo Hoodie” currently retails for $60, however it’s no longer offered in the brown color, which has created a sense of hype around it. The tonal style is frequently declared “Y2K Vintage” by resellers, who can gauge an era by its label design for a decades-old brand like Gap.

The essence of Gap has always been affordability

Over the past few months, Gap’s logo hoodie has hit resale platforms with staggering, triple-digit prices. Used hoodies on Grailed run as high as $300, regardless of the colorway. On Depop, the Insta-famous brown reigns supreme; listings run anywhere from $70 to $250. Some sellers launch full-fledged bidding wars, called “interest checks,” updated with the current highest offer.

The essence of Gap has always been affordability, with sweatshirt prices capping at $65 and jeans at around $100. Unlike vintage streetwear or archive designer pieces, Gap clothes generally don’t increase in value over the years. Ebay listings of Gap hoodies hover around $15, while thrift prices rarely break $10. But the speed, and irony, with which Gap hoodies have climbed the resale ladder — resulting in a 300 percent markup that rivals Supreme Box Logo hoodies and Air Jordan collabs — is dizzying.

While Gap hoodies were abundant on thrift shop racks a few months ago, they’re now at the center of digital bidding wars. If this resurgence began as a middle finger to streetwear’s brand-worshipping hype train, social media’s fashion bubble and thrift shop vultures have now firmly shackled it to the caboose.

Maryam Dust, a London-based Depop seller who recently sold her brown Gap hoodie for $210, says the trend was built on social smoke and mirrors. “I came across several TikTok videos predicting 2021 trends back in December, and one of the most popular predictions was brown Gap hoodies,” she said. “In anticipation, people bought them all over online to stay one step ahead of the trend, which, in a way, created in a self-fulfilling prophecy.” If the trend really sprouted from nothing more than preemptive social media hype, the Gap hoodie’s sudden inflation is bizarrely equivalent to January’s GameStop stock surge, almost down to the exact price increase.

“People are willing to pay extortionate amounts to keep up with mainstream fashion trends.”

Dust isn’t quite a trend-shark, like some resellers — she bought the hoodie for herself, for $125 on Depop, but decided to sell it after stumbling upon a second one. The hyper-inflation gave her a chance to make her money back and then some, so she priced her hoodie around $70 less than the others on her feed. It sold in eight days, with almost 300 likes — not an usual timeline for her Depop sales, Dust said, but sooner than she expected for a $210 sweatshirt.

She credits the specific hoodie’s success to an overarching trend towards the color brown, and influencers who pulled Gap’s sweatshirt into its orbit. Although she is a happy participant in the trend, naming Barbara Kristoffersen as her influence to buy the initial hoodie, Dust is fully aware of the fashion food chain.

“People are willing to pay extortionate amounts to keep up with mainstream fashion trends, because they may have seen an influencer wear it,” she said. “This starts a chain reaction: they sell out that specific item online, so the demand is higher, which drives prices beyond the [recommended retail price] on selling apps. Pretty soon, the hype dies down as people obsess over other items.”

On its surface, the Gap hoodie trend isn’t actually far-fetched: it’s only the latest Y2K relic to emerge from TikTok and Instagram, following hits like velour tracksuits and trucker hats. Unlike those items, however, Gap hoodies are reselling for quadruple their retail value — is it because the aesthetic appeal doesn’t go much further than the logo?

With a handful of influencers behind it, and a dose of Gen-Z nostalgia that’s heavily intertwined with the brand itself, even a fast fashion fixture like Gap can skyrocket in status and price. At its core, this trend feels more like a social experiment, though it gets to the heart of what a statement piece can be among certain subcultures — from sneakerheads all the way to vintage gold shoppers.

But hey, if you’re looking for TikTok views or a quick payday, it wouldn’t hurt to find that fifth-grade Gap sweatshirt you used to love and check if still fits. If you don’t want it, you can sure as hell find someone on the internet who does.