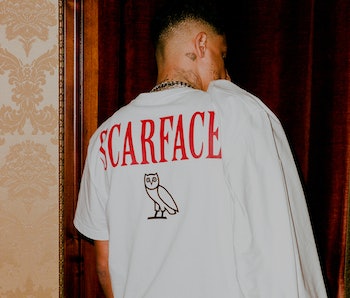 Every day above ground is a good day, especially if you’re Drake: The rapper’s October’s Very Own (OVO) has teamed up with Universal Pictures on a collection that celebrates the iconic 1983 film Scarface. Tees, hoodies, and jackets have all been decorated with graphics of the movie’s main character Tony Montana holding a cigar alongside Scarface branding in its signature red typeface.

The cinematic partnership follows OVO’s recent team-up with Jurassic Park, which featured prehistoric apparel like “claw-ripped” tees, hoodies, and a leather varsity jacket made by legendary designer Jeff Hamilton. In tune with the 1993 film, the jurassic pieces took on a ‘90s and ‘00s feel — a theme which seems to extend to the Scarface capsule. With the gangster movie filmed 10 years earlier than the dinosaur blockbuster — and taking place in the late ‘70s and early ‘80s — its OVO collection takes on more of an athletic feel, incorporating loungewear styles like hoodies and tees. Just throw on a gold chain and you’re practically ready to star in the movie.

Say hello to my little friend — Drake’s feature on Future’s “Tony Montana” song hints that he can appreciate the Al Pacino film as much as the next person, and his OVO collaboration only solidifies the fact. The new range includes a hoodie, crewneck sweatshirt, and a short-sleeved tee which comes in black, red, pink, teal, gray, white, and yellow.

Red Scarface graphics, done up in the same font as the movie poster, sit on the chest of the hoodie and the back of the tee and crewneck, accompanied by OVO’s signature owl logo. Each tee bears a picture of Tony Montana himself smoking a cigar, a motif which shoppers are seemingly encouraged to replicate in their OVO gear — we already feel like Drake has tried it.

A non-romantic release — Although the theme of the capsule undoubtedly pays tribute to the gangster film, its red and white color scheme seems fitting for Valentine’s Day, especially given its timing. And as Drake has made public over the years, he isn’t the best at handling heartbreak — something he may be experiencing after his last serious ex Rihanna announced she was pregnant, officially leaving Champagne Papi in the dust. It would make sense why Drake would drown his sorrows in Scarface rather than a rom-com.

If you’re also boycotting V-Day — or are just a fan on gangster films — check out the full Scarface capsule on OVO’s website.