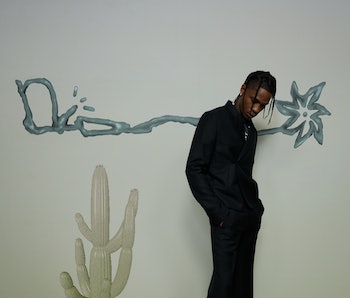 Dior has announced it will indefinitely postpone its Cactus Jack collection, designed in collaboration with Travis Scott. According to WWD, the capsule will not be released anytime soon, and there is no indication whether it will be released at all.

“Out of respect for everyone affected by the tragic events at Astroworld, Dior has decided to postpone indefinitely the launch of products from the Cactus Jack collaboration originally intended to be included in its summer 2022 collection,” the company said in a statement issued exclusively to WWD. Its announcement comes nearly two months after a crowd surge at Astroworld left hundreds injured — 10 fatally — and produced over 275 lawsuits against Scott and event organizers. Most recently, a Congressional panel declared it launched a bipartisan investigation into the tragedy at the music festival, although Scott was not named in the panel’s investigation.

Cut off — The rapper, once considered king of collaborations, has faced a number of postponements and cancellations since Astroworld. Video game Fortnite quietly removed a Scott-themed emote from its platform, while Travis’ biggest partner, Nike, postponed its many sneaker collaborations with the rapper.

Coachella has also dropped Scott from its 2022 lineup, while his own hard seltzer line, produced by Anheuser-Busch, was put on hold indefinitely. Despite expressing his remorse for the event in an interview with Charlamagne Tha God, Scott may never return to the icon (and selling point) he was prior to Astroworld.

No more Dior — As the latest brand to distance itself from the rapper, Dior hasn’t clarified whether its Cactus Jack collection will release later this year, or ever — like many other labels, the fashion house is likely playing things by ear. Its capsule with Scott marked the first time Dior had partnered with a musician on a collection, and the first time it ever allowed its logo to be altered. Yet the monumental collaboration, which also marked Travis’ biggest high-fashion partnership, now seems to be the first Dior has had to postpone.

The range of ready-to-wear apparel, previewed in June, was designed by Scott alongside men’s artistic director Kim Jones. Initially scheduled to drop in the spring of 2022, the capsule featured cacti and desert themes to pay tribute to the rapper’s Texan roots.

Prior to Astroworld, the Cactus Jack collection was considered a sure-fire success, helping to bridge the gap between streetwear and luxury fashion. But with lawsuits and investigations surrounding Scott’s image, Dior’s postponement — and possible cancellation — seems inevitable.