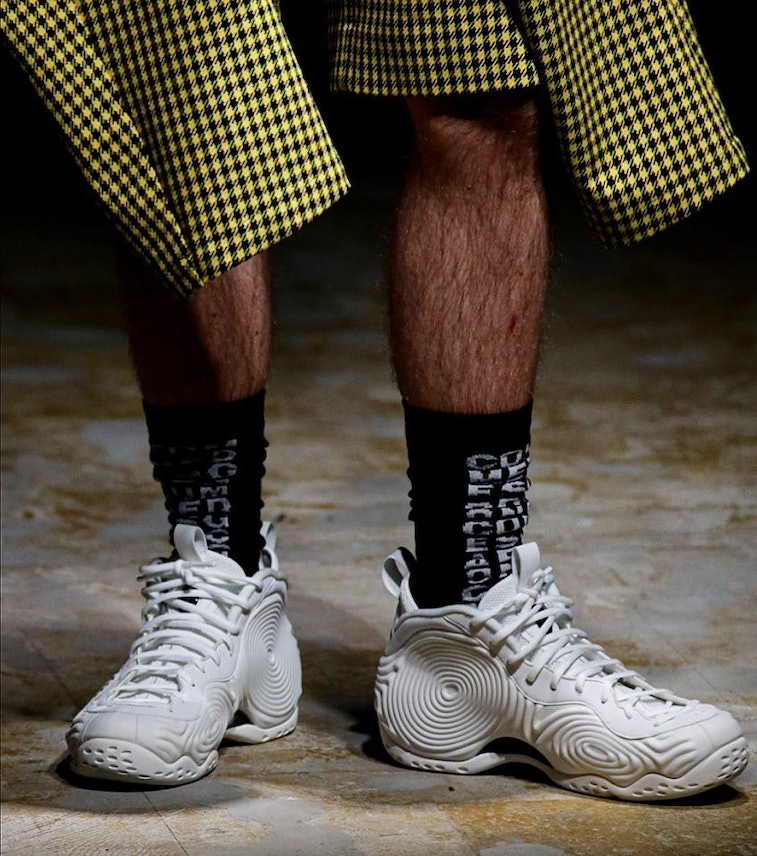 Allow me to introduce you to the Comme des Garçons Nike Foamposite, aka the Foam des Garçons, AKA the "Commeposite."

During the CdG digital runway show for Fall / Winter '21, Rei Kawakubo debuted her take on the Air Foamposite One. The basketball sneaker, first released in 1997, still endures as one of Nike's boldest creations and remains polarizing among sneakerheads. It's most favored in Washington D.C. — and yet the avant-garde Japanese designer may just be the perfect person to toy with the outlandish sneaker.

Under Kawakubo's stead, the Foamposite's shape remains largely the same, but the trademark shell has been molded into a series of spirals, not unlike a Zen garden. Keeping in line with Comme des Garçons' preferred color palette, its Foamposite was shown only in monochromatic black and white color schemes.

The brand's eccentric takes on existing Nike shoes are often divisive — just ask for a sneakerhead's opinion on the bondage friendly Air Jordan 1s — and the CdG Foams will likely leave little room for shades of grey.

What's the deal with Foams? — Well, even today they still look kinda weird. The distinct upper is made from a polyurethane liquid that's poured into a mold and heated to create a glove-like fit. "There was this notion of what if you literally just dipped your foot in this liquid bath of material and it just sucked around your foot?" Eric Avar, then head of the Advanced Product Engineering group said. "And what if you could go play basketball in that?"

Although it didn't bear his name, the Air Foamposite One became Penny Hardaway's unofficial signature shoe. Remarkably, Nike only released one color scheme for the sneaker in 1997 and didn't begin re-issuing it until 10 years later. That's when its popularity began to take off, peaking in 2012 with the "Galaxy," the first of the shoe to feature a print on the shell. Supreme released its own version in 2014 with a baroque print, and the NYPD had to shut down the in-store release because of the massive crowd that gathered.

Foamposites haven't stopped releasing in the years since, but the hype has waned significantly. Apart from Foam devotees, many sneakerheads have looked back and reevaluated, concluding the sneaker is, in fact, ugly.

Strap in for another debate — We may have to wait until this fall for Comme des Garçon's Foamposite to see a proper release, but this year could see arguments over the shoe's merits reach a fever pitch. Louis Vuitton just last week debuted a Foamposite-inspired sneaker designed by Virgil Abloh, and we're only one more high-profile sneaker away from declaring the Foam comeback a proper trend.