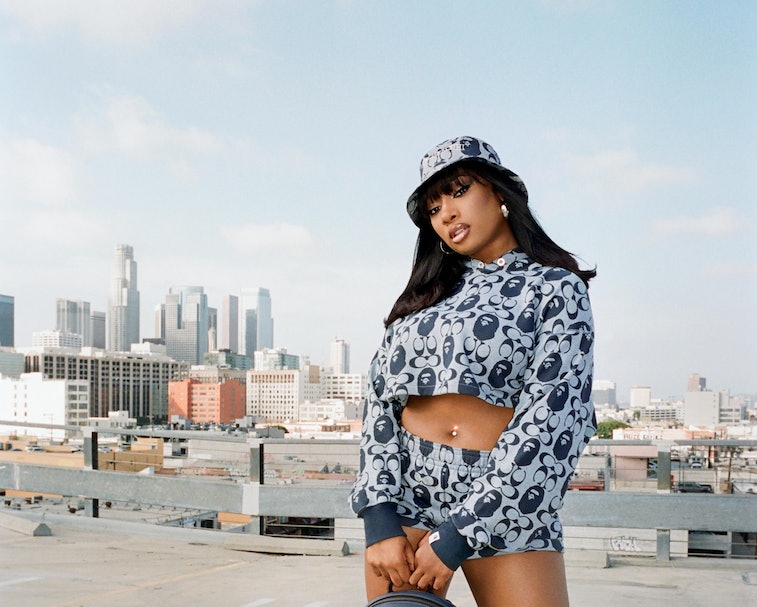 Coach has carefully curated its come up by relaunching vintage styles and signing Megan Thee Stallion as an ambassador in 2019. Now, the brand has unveiled a collaboration with BAPE, modeled by none other than Megan and her French bulldog 4oe (both wearing matching co-branded fits). The partnership marks the second time Coach and BAPE have come together — the two powerhouses dropped their first collaboration in 2020 — pushing both brands farther into (or further from?) the luxury streetwear space.

Coach and BAPE asked Megan, as well as fellow campaign stars Cordae and Japanese model Kōki, how they expressed their personal attitude through the images of the collection. Many of the shots see the stars on a city rooftop, or in Megan’s case, in a studio surrounded by dogs (presumably her own). Alongside the still images, the two brands plan to release an intimate video of the cast in conversation, discussing how they each express themselves.

A limited-edition print, which quite literally combines the two brands’ traits, helps bring the collection to life. Merging Coach’s iconic “C” signature with BAPE’s recognizable APE HEAD logo, the navy pattern dresses everything from cropped hoodies and dog harnesses to mini bags and bucket hats. Seriously, nearly everything has been decked out in the print: Even the classic BAPESTA sneaker has fallen victim.

Mini leather bags and backpacks feature the collaborative pattern in pink, while more low-key co-branding comes on mini dresses, T-shirts, and baseball caps. The simpler designs boast BAPE’s APE logo alongside Coach’s T-rex motif — a clean graphic we can get behind.

Dropping this month — Should the logomania print speak to you — or you’re hoping to score one of the more basic tees — mark your calendar for July 24, when the collection will be available in stores or online at Coach’s website. Be prepared to shell out for your favorite pieces: Prices range from $95 to $595 for leather goods and $150 to $450 for ready-to-wear goods like tees and hoodies. No one said being one of Megan’s hotties was cheap.