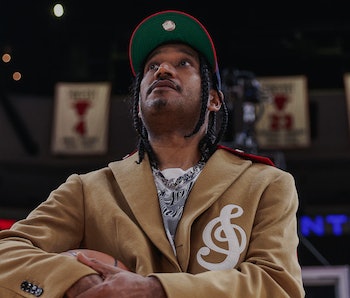 Don C, co-founder of RSVP Gallery and founder of Just Don, has been named the Chicago Bulls’ new creative strategy and design advisor. The new role will see the Kanye West and Virgil Abloh affiliate work with the team on immersive experiences, fan engagement, digital content, youth programming, and community outreach — but, most importantly in many people’s mind, retail products.

“There are few things I have loved as long as I have loved the Bulls,” Don C said in a press release. “It's a dream come true to be able to combine my passion as a fan and my passion as a creative to help this legendary franchise to tap into the culture around the game. Our goal will be to deepen connections with fans and make an impact in their lives. This isn't just about designing merch, but combining bigger things like music, lifestyle, and fashion to represent the Bulls as both an NBA team and a global brand.”

The appointment of Don C follows a similar role for artist and designer Daniel Arsham, who was named the Cleveland Cavaliers’ creative director in 2020. Arsham has been involved in the Cavs’ uniform designs and curated merch collections featuring work from select artists. He also created the logo for this year’s NBA All-Star Game, which is being held in Cleveland.

Don C has already thrived with sports merch — As a designer, Don C is best known for his luxury snapback hats that were en vogue in the early 2010s and his years-long partnership with Mitchell & Ness. His Mitchell & Ness shorts featuring teams from the NBA, NFL, and MLB have proven popular and are something of a status symbol at $400 a pop — but his new appointment will make his designs more widely affordable.

The new role for Don C adds yet another stem to the family tree of Kanye West, whose collaborators and friends have gone on to top design posts for some of the largest brands in the world. Former Yeezy advisor Tremaine Emory was just announced as Supreme’s creative director this week, and Don C’s new job for his hometown Bulls feels especially poetic.