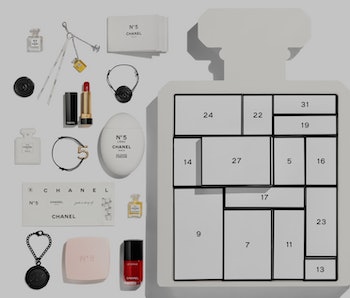 Chanel saw a sell-out for its first advent calendar, released to celebrate the 100th anniversary of the Chanel N°5 fragrance, but the luxury house is facing rampant criticism for underdelivering on the $825 assortment.

As is becoming increasingly common, the controversy originates from TikTok, where user Elise Harmon laid out just how underwhelming Chanel’s advent calendar is over several unboxing videos. Among the items that miss the mark are stickers, temporary tattoos, a flip book, magnet, and dustbag — leading Harmon to describe the box of goodies as “a joke.”

Harmon’s initial video has accumulated more than 15 million views, with most of the follow-ups passing well over the million-view mark as well. Comments criticizing Chanel have spilled over from Harmon’s posts onto Chanel’s Instagram account, where chiding references to the advent calendar have become the norm underneath all recent posts.

No, Chanel didn’t delete its TikTok channel — As the pile-on continued, Harmon accused Chanel of blocking her on TikTok, and several others alleged that the luxury house deleted its entire page in response to the controversy. Neither accusations are true, however, as Chanel’s page on the platform has never been activated.

Chanel has also acknowledged the criticism it’s faced in statements to several media outlets but took care to point out that the full inventory of items within the advent calendar have been laid out on its website from the start.

Although Chanel may not be giving Tiffany competition in the luxury advent calendar this year, the joke may indeed be on those who bought the former’s for not doing their due diligence. At the very least, not every item was a bust — and Harmon was satisified with the inclusion of Chanel’s hand cream, lipstick, nail polish, and perfume (albeit mostly in sample sizes) .