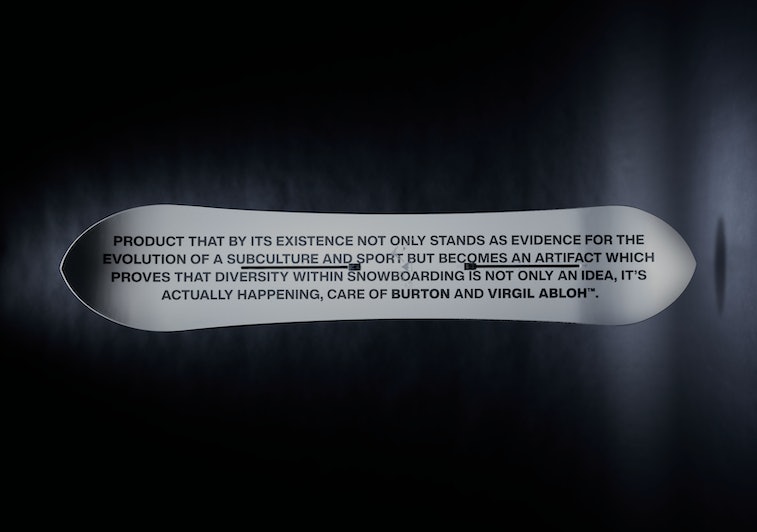 Following the first of the Louis Vuitton x Nike Air Force 1s, another design from Virgil Abloh prior to his passing is going to auction for charity.

A Burton snowboarding capsule designed by Abloh is set to launch soon, beginning with the auction of ten limited-edition snowboards. The minimalist boards are adorned by what Burton is calling a manifesto, text that reads, “Product that by its existence not only stands as evidence for the evolution of a subculture and sport but becomes an artifact which proves that diversity within snowboarding is not only an idea, it's actually happening, care of Burton and Virgil Abloh."

Abloh himself was a snowboarder and skater, and the idea behind his design was to create a conversation about diversity in the sport — similar to what he had done in fashion throughout his career. Proceeds from the auction will go to the Virgil Abloh “Post-Modern” Scholarship Fund, the same charity that benefited from the AF1 auction and which provides scholarships to Black students interested in fashion. Additionally, Burton will donate $300,000 over the next three years to causes that help increase BIPOC representation in snowboarding.

How to get one of the rare boards — The digital auction for Abloh’s snowboards begins at 12 p.m. ET March 15 and will be open for 48 hours through the dedicated website. Bidding will begin at $1,977, a nod to the year Burton was founded — and there’s no telling how high it might go given the demand for the last designs from Abloh’s storied career.

“It was very important to Virgil that his next collaboration with Burton stand for something, that it share a larger message, so he created a manifesto to guide the collection,” Adrian Josef Margelist, chief creative officer for Burton, said in a release. “Every person who worked on this project, from the snowboard designers and the project managers to the riders at the photo shoot took Virgil’s words to heart. They became our manifesto, our mantra, our motivation. Virgil’s words say it best:”

For those looking to try their luck at paying retail, six other boards will also go on sale March 22 as part of a small Burton capsule that also includes boots and bindings. Throw in the other Virgil Abloh board that released last month, and the mountain is suddenly looking a lot more steezy.