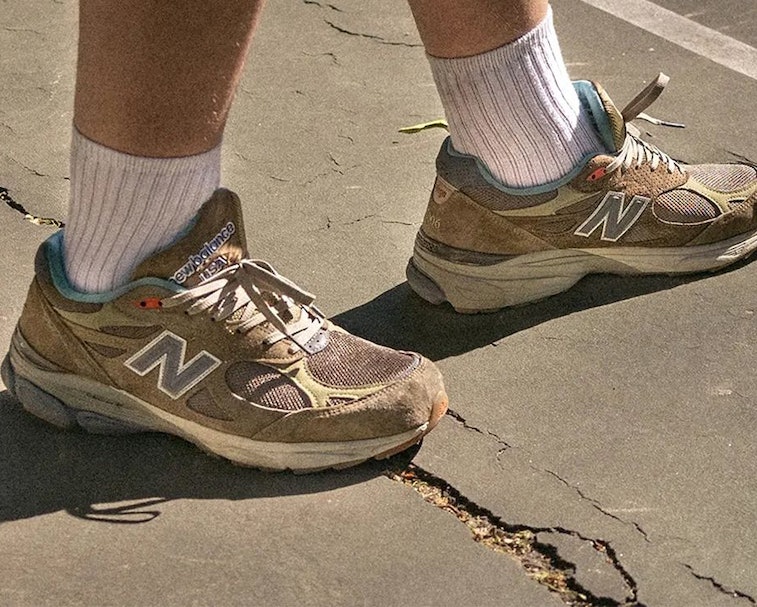 In celebration of its 15th anniversary, streetwear boutique Bodega has collaborated with New Balance to create a 990v3 “Anniversary” sneaker commemorating the store’s impact, longevity and plans to continue growing. Think of the rugged suede shoe as Bodega's “we were here” mark — “call it the human urge to be remembered,” its campaign reads.

First founded in 2006, the Boston-based boutique has built up a reputation for offering curated streetwear and exclusive collaborations. Since its inception, Bodega has opened two stores in Los Angeles and Tokyo, both of which can only be accessed by a secret door at the back of a bodega — hence the name. “The past fifteen years have been something that just seemed like a fun idea, like writing your name in wet cement,” the boutique wrote alongside its commemorative sneaker announcement. But “once you make your mark on that blank space, it doesn’t matter if you planned it from the start, or the opportunity was just there. It’s here to stay.”

Worth waiting 15 years for — Here, Bodega’s mark comes in the form of one of its most beloved silhouettes: New Balance’s 990v3. With an upper made of suede and mesh, the sneaker sports earth tones like olive, beige, and dark brown broken up by hits of cream and gray. A bright aqua brings more color to the collaborative shoe around its sockliner, while a rusty orange accents the footwear’s eyelets and frontal New Balance branding.

Celebratory anniversary branding, printed on the insoles and heels, differentiates this sneaker from past partnerships. On the left shoe, “2006” — the boutique’s founding year — has been printed on the heel, while “2021” labels the right sneaker’s heel. A cream midsole atop a gum outsole rounds out the “Anniversary” 990v3.

Changing the sneaker game forever — Back in 2006, “the idea of sneaker obsession as viable business” was unheard of, wrote Bodega. But now, people will wait hours in line (or online) for shoes — including this one. The key to succeeding in the sneaker world, Bodega wrote, is its “constant striving to offer something more than a simple transaction:” At the boutique — and to its consumers — sneakers are regarded as something special, or “extraordinary.”

As such, the same adjectives apply to Bodega and New Balance’s 990v3 “Anniversary” sneaker, which drops June 16 at 12 p.m. ET. Expected to retail for $200, the commemorative shoes will launch via the boutique’s website on a first come, first served basis. This isn’t your everyday collaboration, so move fast — you don’t want to miss out on Bodega’s mark in history.