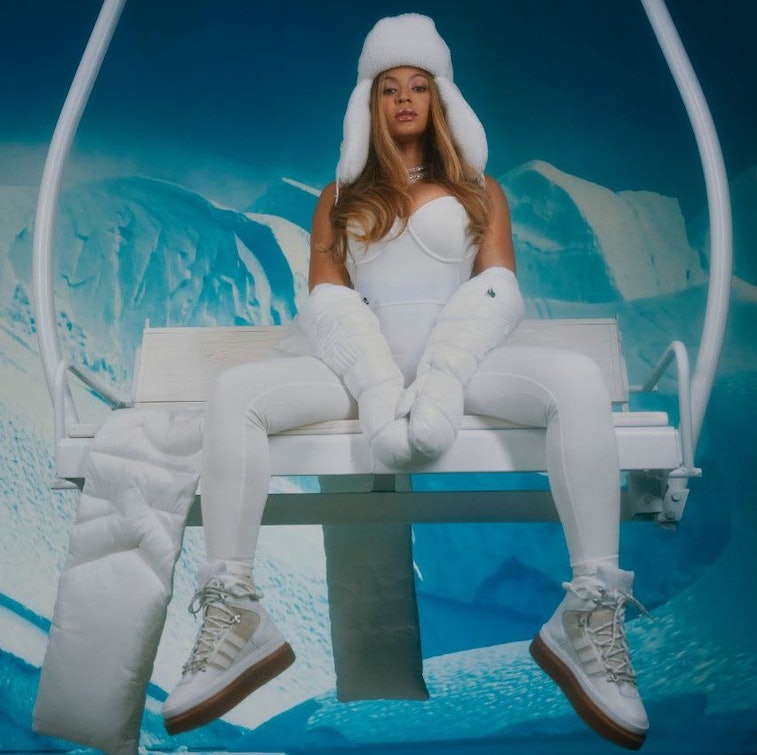 Beyoncé usually brings the heat, but this time, she’s giving us the cool treatment. The star announced she and Adidas would soon drop the third collection for her collaborative brand, Ivy Park. The label released a brief video that revealed the theme for the capsule and a handful of celebrity guests. Nicknamed "Icy Park," the latest offerings are inspired by winter wear, and the campaign photographed by Robin Harper features Beyoncé, Hailey Bieber, and Gucci Mane in their finest slope-appropriate attire.

It’s been a minute since we’ve heard anything from Ivy Park, with its last collection dropping this past November. Dubbed “The Black Pack,” the capsule focused on select black and brown pieces, ranging from basics to a maxi track jacket with a built-in mask. Since it sold out in minutes, Beyoncé fans have been eagerly awaiting the next drop — and it looks like their wait will be worth it.

A star-studded cast — The announcement kicked off with none other than Beyoncé herself, posing on a ski lift like a queen upon her throne. She’s outfitted in a white shapewear-inspired bodysuit, matching leggings, platform sneakers, elbow-length mittens, and a floppy fur ski hat. Very apres-ski chic.

In another shot, Hailey Bieber models a magenta-hued set on top of a shearling-lined truck. Wearing a patterned long-sleeve crop top and matching biker shorts, she also shows off white tube socks, white platform sneakers, and a knit beanie.

As for Gucci Mane, he appears in the new promotional shots wearing an ivory-colored Ivy Park sweatsuit, high-top sneakers, a ribbed knit beanie, and ice that puts the literal version around him to shame. Despite his cold surroundings, he looks comfy AF.

Winter is coming — According to WWD, the new collection will include five new styles of shoes. Among those, per WWD, is an update to the Ivy Park Ultra Boost and other models, as well as an all-new Super Sleek Boot. Some of the fresh silhouettes can be seen throughout the promotional video.

Other offerings, as shown in an array of close-up shots, may include branded faux-fur coats and reflective jackets. Like past drops, it looks as if most pieces are meant to be versatile, so you can hit the slopes and apres-ski drinks in style.

Unfortunately, Bey’s video didn’t give us a drop date — only a cryptic caption reading, "#ICYPARK Coming Soon." When it eventually drops, though, the pieces won’t be around for long. The Beyhive is already buzzing.