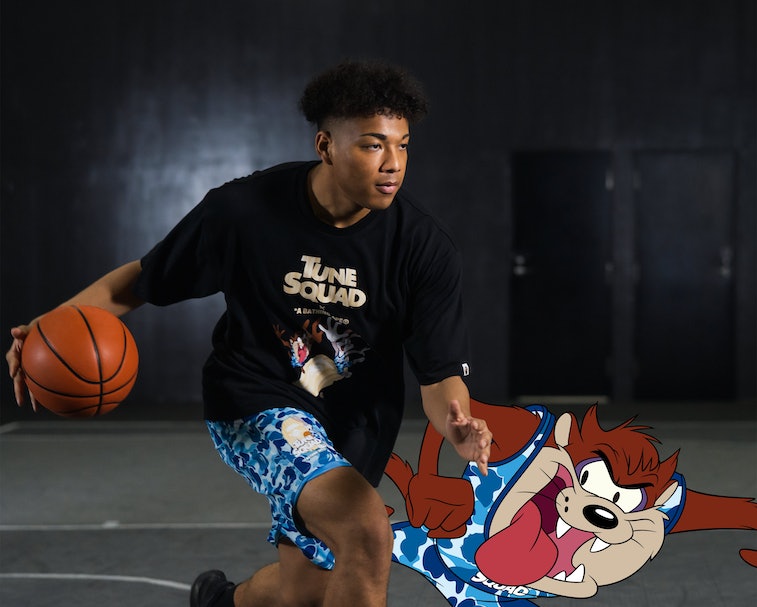 Space Jam: A New Legacy isn’t just a LeBron James-starring sequel, but an astronomical exercise. More than 200 brands will collaborate on merch for the cartoon basketball flick, and joining the party with an all but open invite now is BAPE.

The seminal Japanese streetwear brand has delivered pretty much exactly what you’d expect, but the Tune Squad naturally lends itself well to the BAPE aesthetic. A Bathing Ape’s formula for collaborations is more or less set in stone in the post-Nigo era, making it easy to trot out gear for Space Jam, Star Wars, or whatever other movie wants to cash in on streetwear next.

There are shorts, though — Four T-shirts, which will all be available in men’s and kids’ sizes, play with the formula of logos, Cloud Camo, and Looney Tunes with options for either black or white. The sole non-tee offerings of the small collab are shorts and a bucket hat done up in the blue Cloud Camo and featuring a graphic of Bugs in front of the Bape’s logo.

The collaboration is relatively phoned in, but it’s still good enough to stand out amongst the crowded field of Space Jam merch you’ll see this summer. Space Jam and BAPE is hypebeast fodder too easy to fail, but the coolest thing about the collab is who was chosen to model it. Aren Hachimura, a promising Japanese basketball player whose older brother plays for the Washington Wizards, was photographed for the lookbook, bringing more attention to the game in Japan.

Bape’s Space Jam apparel will go on sale through its website at 11 a.m. this Saturday, July 10. Prices start at $115 and top out at $205 for the shorts, and if you miss out or find the gear too expensive, don’t fret — there’s plenty more movie merch to drop ahead of the July 16 premiere, if not long after, too.