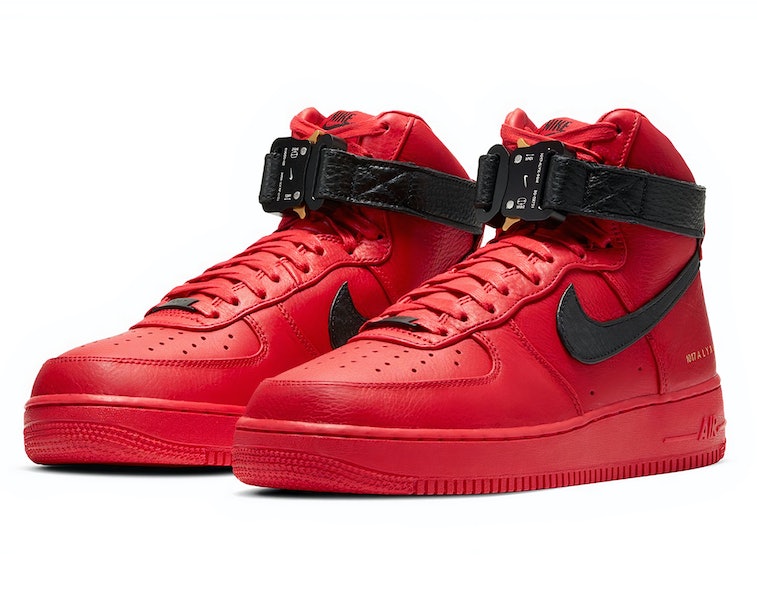 Alyx is bringing back its Nike Air Force 1 High with its signature rollercoaster buckle — and it’s doing so with two “University Red” color schemes you can’t possibly miss. The heavily fastened sneaker makes its return this week in two red and black color schemes that serve as inverses of each other.

Anodized aluminum is used for the buckles, while the straps come in a tumbled leather to match the upper and imbue a sense of luxury. The two new pairs will mark the 10th and 11th since Alyx designer Matthew Williams first retooled the lesser-sung Air Force 1 High last year and the first to stray from the brand’s typically muted color palette.

Expect to pay a premium — Alyx’s take on the Air Force 1 is among the most expensive you’ll ever see, with previous pairs retailing for a whopping $400. Part of the upcharge is due to a switch to Lyra for the upper, a more premium faux leather described as “silky” to the touch. A synthetic Nappa leather is also used for the lining, making the sneaker fully vegan and sticking to Alyx’s sustainable sensibilities.

Both versions of the Air Force 1 High release through a raffle opening on Alyx’s website at 1 p.m. EST Tuesday, October 19. The timing coincides with the beginning of the NBA season, and entries will be accepted until 1 p.m. EST Thursday, October 21. Should you win the raffle, you’ll be well on your way to doing your best fashionable Rasheed Wallace impression.