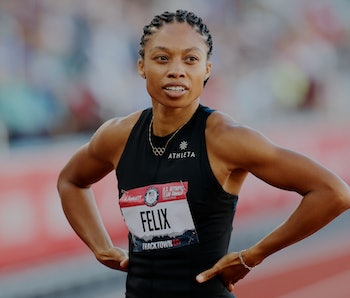 U.S. Olympic sprinter Allyson Felix has launched her own sneaker company two years after her high-profile split from Nike. Today marks the debut of Saysh, Felix’s own lifestyle brand for women that she decided to start after being unable to reach a sponsorship deal with any other footwear brands.

Felix’s goal is to tap into the underserved women’s footwear market, which she told Time has been reduced to a “shrink it and pink it” mentality. The company’s first model is the Saysh One, a lifestyle sneaker designed specifically for the female foot with a more narrow heel and wider forefoot. A striped jacquard heel is inspired by a wrap dress and running track, while the heel uses a single molded piece. The sneaker was designed by Tiffany Beers, a former Nike product engineer who now serves as Saysh’s head of product.

“It’s really about meeting women where they are,” Felix said in an interview with Time. “It’s for that woman who has been overlooked, or feels like their voice hasn’t been heard. That was the biggest thing when I spoke out, was hearing from other women across industries. And having such a connection there, feeling like it’s so much bigger. There’s just that power in the collective.”

Why Felix left Nike — Felix, the most decorated woman in the history of the U.S. track and field team, penned a New York Times op-ed in 2019 addressing the lack of financial support from Nike when she was pregnant. The sneaker giant wanted to reduce her compensation by 70 percent and pressured her to return to the track quickly after giving birth, Felix said.

Along with several other female athletes who called out Nike, Felix’s revelation led to the company revealing a new maternity policy that would guarantee athlete’s pay and bonuses for 18 months around pregnancy. Still, Felix left the company and signed an apparel deal with Athleta, which will begin selling the Saysh One through its website in August.

The kicks are pretty great — The Saysh One is available to pre-order now for $150, and purchase will include include a lifetime subscription to the Saysh Collective, which offers workout videos, conversations with Felix, and opportunities to network with other members. On its own, membership costs $10 per month — a fee that can be avoided by adopting Saysh’s sneaker from the ground floor.

In a crowded field of independent sneaker brands, the Saysh One stands out as an immediately attractive alternative to the giants. With suede lining and internal cushioning on the tongue and heel, it should also be quite comfortable. Felix has also been running in a Saysh track spike for Olympic qualifying events, and she’ll continue to do so at this summer’s Games in Tokyo. The company could also expand to include clothing, creating a one-stop shop for women’s athletic gear that’s not so pink.