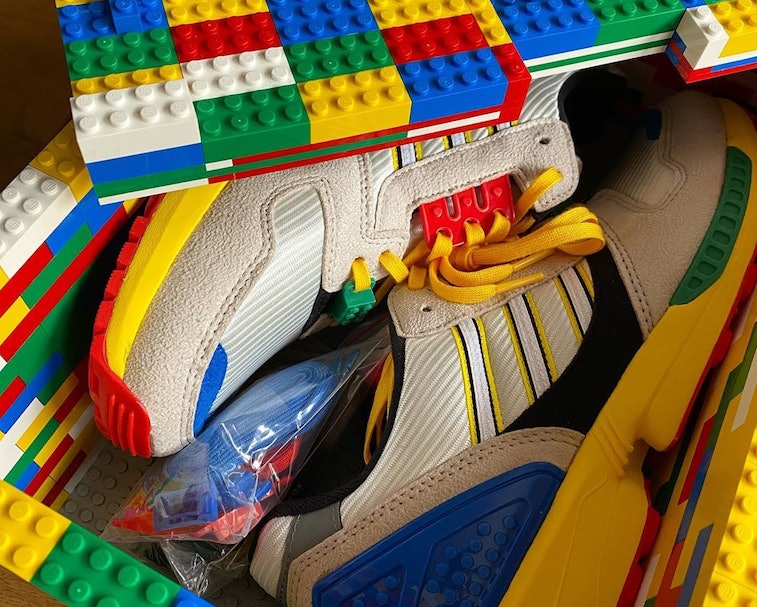 As Adidas and Lego teased last week, they have a special project in the works that's set to debut any day now. And thanks to Three Stripes collaborator Sean Wotherspoon, we're getting the best look yet at what the brands put together. The Lego x Adidas collaboration comes in the form of a super colorful ZX 8000 sneaker, which features red, blue, green, and yellow accents that pay homage to the toy maker's popular brick sets, as well as blocky details around the heel counter and lacing area that stay true to the building theme.

The best part, however, might be the signature Lego studs that are on shoes' outsole — it makes them feel like they're an actual toy, rather than just boring footwear.

A classic with a twist — Aside from the Lego-inspired features throughout this ZX 8000, including a "Lego" patch on the tongue, Adidas put its classic gray suede and white mesh materials on the sneakers. Those are the kind of craftsmanship details that have always given this particular model a premium feel — even though it has an accessible price tag. Speaking of which, according to Sneaker News, the Lego x Adidas ZX 8000 is expected to drop on September 25 for $130, meaning you won't have to wait much longer if you're hoping to get a pair.

There's no word on how limited these kicks will be, but considering that they're quite a treat to look at, you should expect them to be relatively sought after. Of course, that's not something we'll know until they officially launch, so consider this your warning to prepare yourself and be ready to battle it out with other sneakerheads and hypebeasts come drop day — especially since there are probably going to be some Lego collectors going after them, too.

Fun potential — Whatever happens, you know at Input we love doing the absolute most with Lego collaborations, and we're already thinking of ideas on what we could potentially do with a pair of these. It likely wouldn't be as involved (and cool) as the Lego Nintendo Entertain System (NES) set that we turned into a real gaming console, but don't underestimate us, either. There's a bit of room for experimentation here.

While we wait for that to happen, here are some pictures of Lego's Adidas ZX8000 sneaker to hold you over until you (hopefully) get your own pair, courtesy of Sneaker News. And yes, there's a shoelace lock that's an actual, small Lego brick — aka it looks as if you'll have the chance to stack other pieces on them.