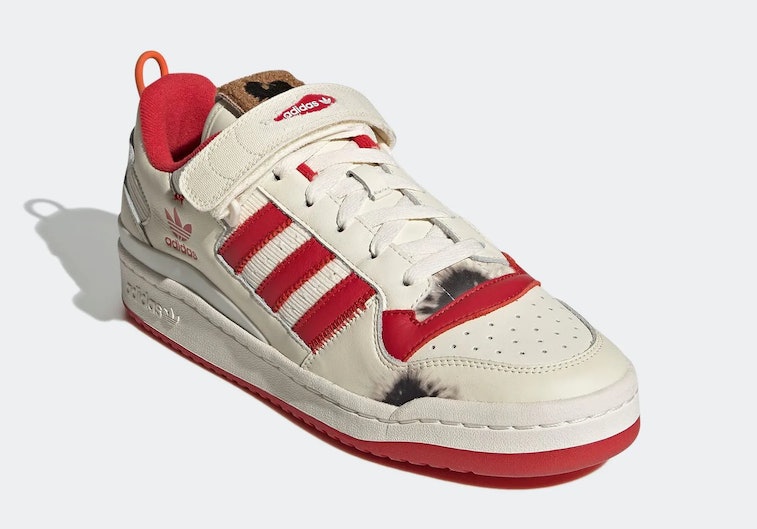 Adidas is prepping a Forum Lo sneaker dedicated to the classic Christmas movie Home Alone, and it seems to be arriving at a pace faster than that of Kevin McCallister’s parents. Channeling the character’s own on-screen kicks — which were, in fact, a pair of Three Stripes — the shoe flaunts shades of red and white similar to those seen in the 1990 film.

Official imagery of the thematic sneaker surfaced last month despite no proper announcement from Adidas, indicating an upcoming release. Now the brand has confirmed the Forum’s launch — via its Confirmed app, no less — and fans can get a pair just before the holiday season.

Sneakers with a story — Directly referencing Kevin’s own Forum Los, Adidas’ upcoming sneakers feature a cream base with red accents hitting the outsole, eyelets, Three Stripes, collar, and ankle strap branding. A red house on the lateral side of the left shoe nods to the one seen in the Home Alone title, while miscellaneous red stitching makes it look like the sneakers have survived Kevin’s shenanigans throughout the film.

Burn marks near the front of the Forum detail Kevin’s fiery defense plan against Wet Bandits Harry and Marv, while the sneaker’s signature strap opens to reveal McCallister’s quote, “This is my house, I have to defend it.” At the heel, a glow-in-the-dark heel loop nods to the house’s doorknob, responsible for burning the bandits a number of times.

Graphic insoles offer a better look into Harry and Marv’s adventure within the McCallister house, bearing photos of the bandits caught up in Kevin’s traps of shaving cream and television trickery. Various versions of the insoles, as well as removable dubraes, help wearers customize their Home Alone kicks. An iron, maintenance van, fire extinguisher, fan, broken ornament, and can of paint can adorn the shoe’s laces, depending on which of Kevin’s plans the wearer decides to execute — or hopefully, just don in spirit.

Tiny metallic “M” charms sit on the heel, perhaps as a further tribute to McCallister (or his actor, Macaulay Culkin), while co-branded chenille tongue tags, inspired by the rugs in the film, finish off the thematic Forum Los.

‘Tis the season — Some filthy animals will be able to get their hands on the Home Alone sneakers before anyone else. On Adidas’ Confirmed app, users can enter a draw for early access to the sneakers on December 1, beating the Forum’s global release on December 11. After joining the draw, all users need to do is await the results — and find the ugliest holiday sweater to pair their Home Alone sneakers with.