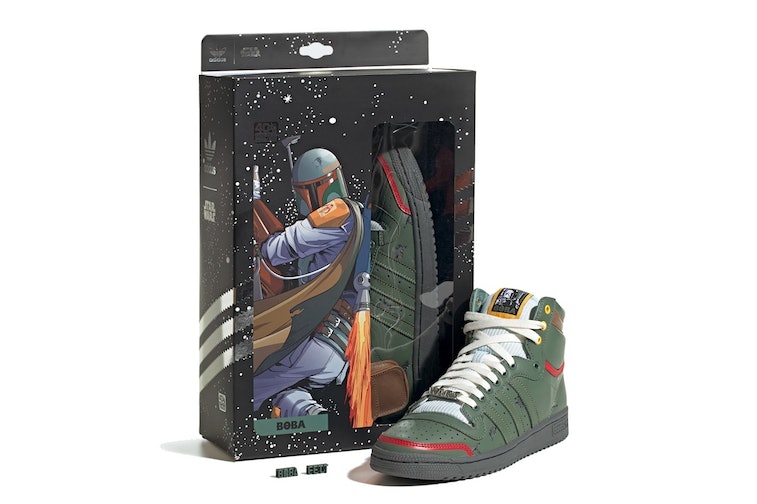 When Adidas revealed a new Star Wars collaboration earlier this year, which featured sneakers inspired by Yoda, C-3PO, and Stormtroopers, its offerings left a lot to be desired. While the idea for each pair was great, the execution simply wasn't there — the shoes just felt rushed and uninspiring. Thankfully for Star Wars fans, the Three Stripes brand isn't done bringing projects from a galaxy far, far away to life here on planet earth. And this time it's a sneaker designed after one of the movie franchise's most revered characters: Boba Fett, whose Adidas' pair is definitely an improvement over the themed Ultra Boost, Top Ten Hi, and NMD R1 from a few months ago.

Instant hit — Like with the C-3PO version, Adidas chose to do another Top Ten Hi silhouette for its latest Star Wars collab, which features a matte dark green leather upper that resembles Boba Fett's customized Mandalorian armor. This includes strips of red around the toe and heel areas to match his iconic helmet, a graphic on the sockliner that shows him at Lando Calrissian's base next to Darth Vader's troopers, as well as a patch on the tongue that reads "BOBA."

There are several holes on the upper, too, each intended to mimic the breathability details on his armor suit, along with a pocket attached to the shoes that makes them look similar to those weird Takashi Murakami sneakers that look like cargo pants for your feet. On the inside flap of that pocket, there's the printed message "You can run, but you'll only die tired," perhaps Boba Fett's most emblematic punchline.

Wearable or collectible? — To make things even better, the Adidas x Star Wars Top Ten Hi Bobba Fett sneakers come in special packaging, which makes them feel as if they're a collectible toy rather than just a pair of shoes. According to Adidas, as a way to celebrate the 40-year anniversary of Star Wars Episode V: The Empire Strikes Back with this collaboration, its Boba Fett sneakers will also come with a special edition poster and Star Wars lace jewels to give them a bling-bling effect — if you're into that sort of thing.

Unfortunately, right now there's only information about these dropping on Adidas' U.K. site for £84.95 (about $112) on September 24, and it's unclear whether the company plans to bring them to the U.S. For now, enjoy the pictures below, because these are worthy of your Boba Fett-esque sneaker-hunting skills — we'll keep you posted if there's any additional info on a broader launch.