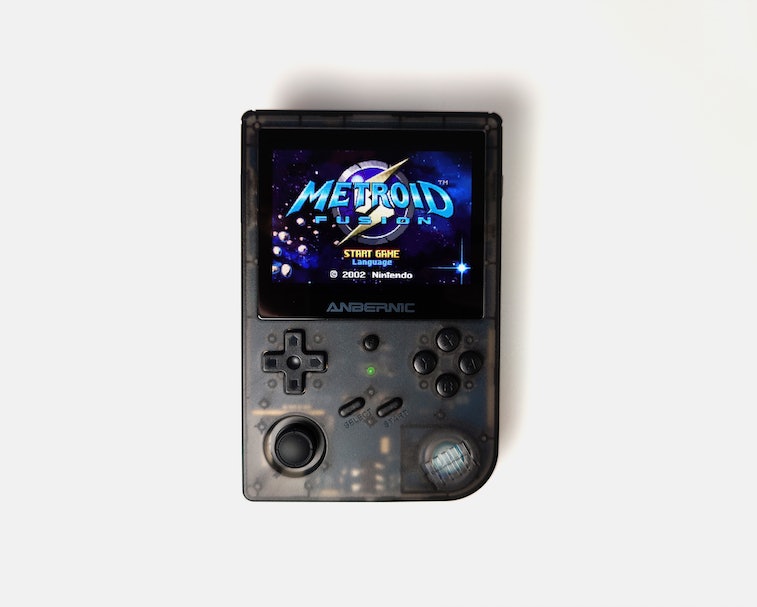 Until two weeks ago I had successfully resisted the urge to buy a dedicated retro gaming handheld. I was aware of Anbernic’s Switch-style RG351P, but I just bought a Razer Kishi — recommended by our gaming editor Ryan Houlihan — and that setup was working perfectly fine. But then Anbernic took the wraps off the RG351V and just like that, my nostalgia strings were plucked and my wallet opened.

For those not in the know, there’s an entire ecosystem of retro gaming handhelds out there. The vast majority of them have a Switch-like layout with the screen in the middle and the controllers on the left and right. Anbernic’s RG351V is one of the few devices with a vertical layout, like a Game Boy. As a child of the ‘90s I simply had no choice but to stan.

I ordered mine directly from China via Anbernic’s AliExpress page. There was absolutely no question about which color I was getting: There’s a wood-patterned one (?), a gray one, and a translucent black one. To me the choice is obvious? But all the YouTube reviewers seem to have the wood-patterned one? Very suspicious.

As a child of the ‘90s I simply had no choice but to stan.

Regardless, I got my RG351V after about a week (I opted for the fast shipping because I’m impulsive and impatient), and I’m not ashamed to admit that I ripped that box open fast. It turns out that the RG315V is huge compared to an actual Game Boy, but I am also an adult-sized person now, so I appreciate the upscale.

It’s hard to get an impression of build quality from product pictures and YouTube videos, so I was a little worried about build quality. Luckily the plastic housing is thick, rigid, and has a pleasant matte finish. The junction between the front and back housings is decent, as is the milling around the USB-C ports and microSD slots. In the hand it feels firm and reliable.

Then there’s the screen, which is extremely good. It’s bright and I really like the color tuning. It’s just saturated enough that it’s pleasing to look at but doesn’t change the look of the source material. It’s also laminated, meaning that there’s no air gap between the LCD itself and the front glass, and critically it has a 4:3 aspect ratio making it perfect for home console emulation like SNES and PS1.

The buttons are also better than you’d expect. The analog stick is identical to the one on the Switch, but the face buttons on the RG351V are a bit larger and have more travel than the ones on the Switch. I’m not a fighting game person, but I did try the D-pad with some Megaman games and it was accurate and comfortable. Even the speaker gets nice and loud.

Someone far more financially responsible might argue that I already have devices that can emulate my favorite retro games. My laptop, tablet, and my phone are more than capable. But on all three it’s hard to really feel immersed in these games, and I have a tendency to bounce between them instead of really playing them. With the RG351V I can finally get into the games I’m playing, and I recently beat Super Ghouls 'n Ghosts (with savestate scumming, obviously), and it was great. It turns out the end of the game is horrible, but my experience playing it was very good.

Now, you will need to be ready to mess around with some settings on these handhelds. They come with a messy and eclectic (and definitely illegal) library of games that you can pickup and play, but they won’t look good. If you want things to look nice and be in their proper aspect ratios, you’ll have to dig around in the settings a bit. I suspect that many people reading this won’t have any problem with this at all, but it’s worth mentioning.

Fortunately YouTuber Retro Game Corps has a great tutorial on doing the initial setup of this handheld:

The RG351V does have limits. It’s not powerful enough to emulate consoles like the N64, Nintendo DS, and PSP very well. Custom firmware and better Nintendo DS emulators might change that a bit, but I wouldn’t count on it. I haven’t tried the arcade emulators, but I can confirm that SNES, PS1, and Game Boy Advance play amazingly. Pokémon Fire Red just looks perfect on this device, and I can’t wait to play through Final Fantasy IX.

So should you get it? At half the price of the Analogue Pocket (which you can’t even buy at the time of writing) it’s just a no brainer. The fun-to-price ratio here is just nuts. I wish that Nintendo would release something akin to the SNES Classic in this form factor, or just bring the Virtual Console to the Switch (???), but for now I’m more than happy to compromise with this gray market special.