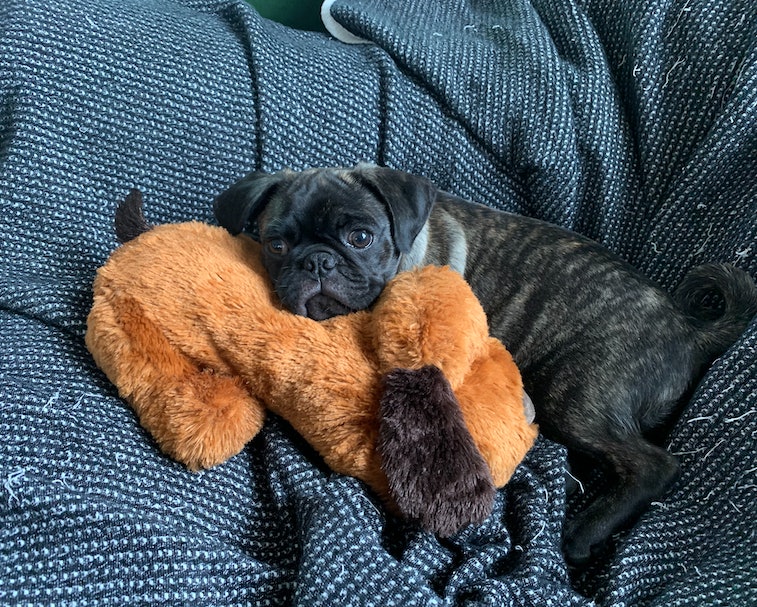 My girlfriend and I got a new puppy last month. He's a pug, his name is Dr. Mordechai Pepperoni, and he's a goddamn nightmare.

I mean, holy shit is it rough in this house right now. There are two other pugs here, as well — they both belong to my girlfriend, are about to turn 17-years-old, and they loathe Mordechai. But their hatred is understandable since Mordechai isn't really all that concerned with adorably cuddling with them like we hoped might happen. He is much more interested in yanking on their tails, gnawing at their ears, and just generally being a small, flat-faced, congested hog-gremlin and / or industrial-grade poop factory, depending on the time of day.

It's unlikely we could have kept up with this guy even without two ancient, incontinent, mush-brained pugs before a horrorshow pandemic. Add those variables into the mix, and we are about at our wits' end here. We simply can't keep up with his energy levels, and despite our best efforts, he absolutely hates his kennel. Whenever we try to put him in there to chill out, or, you know, reclaim what little joy we have left in our lives, he immediately goes into a shrieking frenzy. Truly, one of the sole things keeping us from dissolving into a pool of tears at any given moment is a Heaven-sent invention known as the SmartPetLove Snuggle Puppy Behavioral Aid Toy.

A stuffed dog mom with a gentle heartbeat and the only thing standing between us and a complete mental breakdown.

We came across the Snuggle Puppy in the weeks of (largely useless) prep leading up to Mordechai torpedoing our lives. Multiple sources religiously swore by the saccharin-sweet stuffed animal dog mom —the Snuggle Puppy's underside features a small, Velcro pouch that stores an AA-battery powered, plastic device shaped like a Valentine's Day engagement ring box. Pressing its front button once sets an eight-hour timer for a heartbeat-mimicking pulse, holding it for five seconds turns the thing on for a full day. Supposedly, the faint thud-thud... thud-thud is enough to take a stressed-out or overstimulated puppy from its "Puppy Frenzy" mode to a state of calm.

Amazon currently has it ranked around 4.5 stars from over 10,000 reviews, which made our cynical selves extremely suspicious. Surely it wouldn't take something as simple as a stuffed animal with a pacemaker to calm Dr. Pepperoni's furry ass down at night? We ordered one for about $40 on Amazon Prime, and huddled in a corner for the next two days as Mordechai proceeded to run roughshod over our lives, counting down the minutes until its delivery.

What happened next was nothing short of a miracle. Mordechai immediately latched onto his Snuggle Puppy — literally. The guy started violently tossing his faux-mom around, but you know what? Fine. Anything to give us a few minutes of reprieve. Later that night, we tucked him into his crate and primed the Snuggle Puppy's internal ticker. After multiple evenings filled with morose wailing from his kennel, this one was mercifully, wonderfully silent. Dr. Mordechai Pepperoni was absolutely smitten with his Snuggle Puppy.

Now, of course, the Snuggle Puppy isn't a cure-all for each and every Puppy Problem. It's not like the thing is gonna teach Mordechai to poop outside, or to leave poor, 16-year-old Pip's tail alone while she wobbles around the house. But in a pinch, the Snuggle Puppy doubles as both a wrestling partner for Mordechai's more extreme energy bursts, as well as an easy calming mechanism that can refocus him whenever he gets overstimulated and needs a break. He sleeps through the night now, and there's no doubt that the stuffed animal has a large part to do with it.

Mordechai is gonna be a badass, adorable pug one day. That day is just not today. Or tomorrow. Or — God help us — a few months from now. But, until then, his Snuggle Puppy is hands-down the best purchase we've made to weather this tiny, smelly, ridiculous self-inflicted storm we've welcomed into our lives. Anyone thinking of getting a quarantine puppy: don't do it. But, if you decide to ignore my dire warning, make sure that little monster enters a home with a Snuggle Puppy waiting for it.