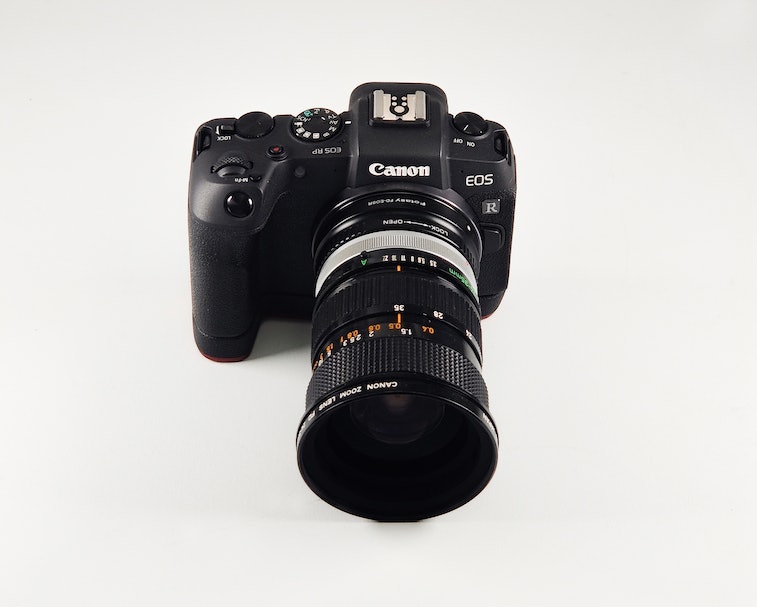 Every once in a while the stars align and a company has the incentive to release a killer product at an affordable price. Today that product is the Canon RP.

I know what you’re thinking; the Canon RP was released all the way back in 2019, why are we talking about it now? Because at $999 (and sometimes even $899 when it’s on sale) the RP is a killer deal.

In fact, I recently sold my Fujifilm X-S10 and corresponding 10-24mm lens to pick up the RP. In a lot of ways this was kind of a lateral move, from one prosumer camera to another, and it is. But trust me, it pained me to give up the X-S10 with its beautiful colors, IBIS, and modern, functional menu system, but ultimately it was the right move. Here’s why:

Vintage lenses — At some point in your photography journey you realize that the “look” of an image has a lot to do with the lens, and I’m not talking about bokeh. I thought for a long time that the camera body imbued 100 percent of the color and contrast information, but this is not the case. Different lenses just render things differently, even at the same focal length.

Here are some of the manual lenses I tried to use with my Fuji:

To get any of these lenses to work with an APS-C camera at their intended focal length (or close to it) you need to use a focal reducer, and let me tell you, I should have listened to my video friends when they said these things introduce a lot of problems. Right off the bat my 28mm lens couldn’t achieve infinity focus on my Zhongyi Lens Turbo II because the rear element and the focal reducer hit each other, and because of flange distance issues I had to get an entirely separate focal reducer for FD lenses. The Contax lens worked, but the C/Y > EF > Lens Turbo II conversion was tenuous at best.

In other words, using vintage lenses on an APS-C camera (at their original focal length) is a mess. On the Canon RP you can use any vintage lens you want as long as someone makes a physical adapter for it, all with no optical nonsense because the sensor is full frame. All my lenses just work, and it’s awesome.

Old Canon lenses — Would you like a high-quality standard zoom for your mirrorless camera? That’ll be at least $1,000 from Fujifilm, Sony, and Panasonic. With the Canon RP, I was able to get a used Canon 24-105mm F4L lens in great condition for ~$400, plus $100 for the Viltrox EF-RF adapter.

For my work, this old lens is exactly what I need. I don’t need silent AF for videos, I just need something sharp, weather-sealed, with pretty good autofocus, and this older lens gives me exactly that for roughly half the price of any of these modern standard zooms.

To be fair, this point could be made about Nikon’s Z series cameras and its backlog of F-mount lenses, but the same can’t be said about the APS-C cameras from other companies.

Film compatibility — Keen-eyed readers will have noticed that I went with an EF 24-105mm lens instead of the newer RF-mount version, and cost isn’t the only reason for that choice. I’ve been getting back into film photography and decided to pick up a mint condition EOS 7 from Keh, and being able to share lenses between my digital and film bodies is pretty amazing.

To understand why I’m low-key obsessed with the RP, it’s useful to point out the parallels between the EOS 7 and the Canon RP, and yes, despite the near-20-year age difference between them, there are several. Both cameras fit into a segment of the market right below the truly professional cameras. For the EOS 7, Canon shaved off all of the expensive, high-end features of EOS 1 series, but left something still completely capable in the right hands.

Sadly this market segment for people like me — people who are semi-pro but don’t actually need every bell and whistle — has been pretty neglected. Sony is the worst offender, but before Canon and Nikon went mirrorless both companies were also aggressively pushing people up the price curve to high-end DSLRs. It’s not terribly difficult to understand why given what smartphones have done to the low end of the camera market.

But this is why the Canon RP is an incredible camera. It’s not perfect by any means; the older sensor lacks the dynamic range of Canon’s more premium offerings. It also doesn’t have IBIS, which I used to think was important when all of us wanted to vlog on the move like Casey Neistat, but actually lens stabilization is fine. This is a camera you can buy without worrying too much about the compromises. It will work, and if you need more than what the RP can offer, there are usually some clever ways to work around the RP’s limitations.

Overall the Canon RP is a fantastic buy. Sony, it’s your move, and has been since March of 2019.