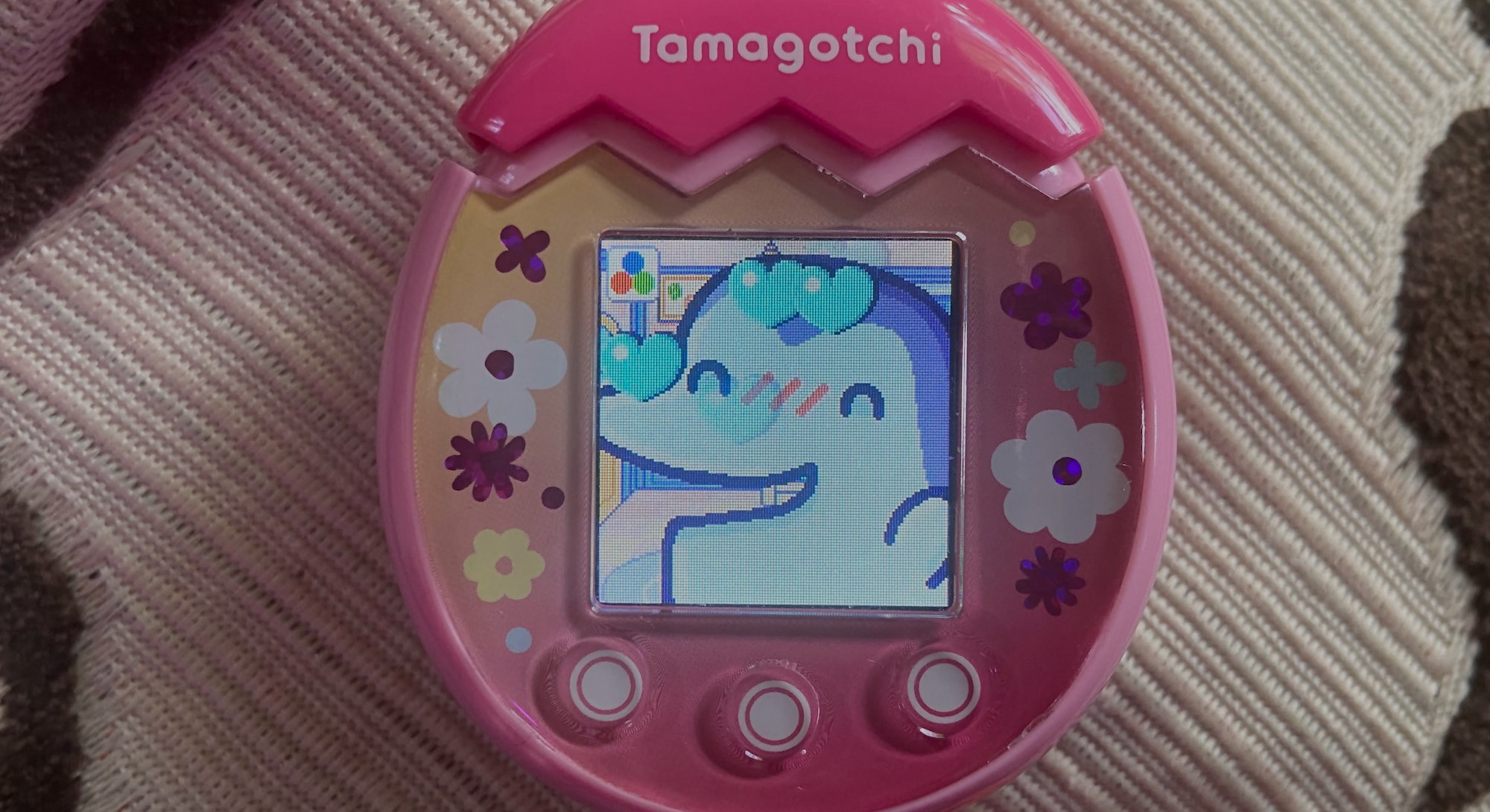 At the risk of sounding smug, I will (smugly) admit it’s been a long time since a Tamagotchi has died on my watch. Well over a year, if I’m remembering correctly. Now, now, hold your applause.

Since falling back into the virtual pet obsession right before the pandemic and subsequently turning full fanatic, I haven’t gone a single day without one Tamagotchi — sometimes even two or three — on my person at any given time. I care for them almost religiously, cleaning up poop and mentally logging their favorite meals and items to keep them happy day in and day out. That’s despite personal unwellness, a demanding job, the many actual pets I have to take care of, and all of the assorted obstacles the past hell-year has presented. To say the absolute least, I am dedicated to the ‘Gotchi life.

So, please take this bias into account when you read the following extremely controversial statement. OK? The new Tamagotchi Pix is great. Seriously, I don’t care what anyone else says, I love it.

Before we get into why, there are some major caveats and it would be irresponsible of me not to mention them upfront.

Tamagotchi Pix, Bandai’s latest addition to the Tamagotchi line of devices, introduces two new interactive features: a built-in camera and touch buttons (in other words, flat buttons that don’t have any form of haptic feedback as opposed to tactile, pressable buttons). While these two physical components make for more expansive gameplay, they also present some really frustrating hiccups.

The touch-sensitive buttons are janky, with mine failing to respond to the press of a finger about one-third of the time. To make matters worse, many early users — myself included — have found that these buttons are misaligned with the shell of the device, meaning part of the pressable area that’s supposed to be exposed is actually covered by clear plastic, further diminishing their potential responsiveness. And the battery life is atrocious. My device arrived on a Friday, I set it up Saturday morning, and I had to change the batteries on Tuesday… yep, after just four days of use. I actually snort-laugh-shrieked, “What!?” when the screen telling me to change my batteries popped up.

But, as I already do with the three Tamagotchi Ons I’ve had on rotation for the last year and a half, I popped in a pair of AAAs I had charged and waiting, and got right back to playing. This brings us to all of the good stuff — and there’s lots of it.

Tamagotchi Pix differs from Tamagotchi On/Meets in that you never breed your own unique pets. You are given an egg to raise based on preferences you indicate at startup (favorite food, color, etc.) and it will hatch to be one of the many existing characters from the Tamaverse. You raise it, play with it, and eventually, if you so wish, send it off to start a career back on the Tamagotchi home planet. You’ll then be sent a new egg to begin the process over with a different character. Don’t worry, Bandai says you’ll also have the option to keep your Tama indefinitely if you’re attached. I was given the hopelessly goofy Ginjirotchi as my first pet, and I love him.

Once you’re past the baby stage, your pet can travel to meet other characters, visit the arcade, go outside to the yard to take care of some fruit trees, cook meals, and even browse/post pictures to a built-in Instagram clone. It’s in these activities that we see some major divergence from the previous devices.

The camera dictates many of the playable experiences, like cooking and meetups with other Tamagotchi characters. To cook a unique meal, for example, you snap a photo of two separate food items, blend them together by swiping over the buttons, and the device generates a recipe based on the colors it detected. The colors, however, are washed out thanks to the very low quality of the camera, and the resulting meal often makes no sense based on the ingredients. Some might be bothered by this but I honestly find it to be hilarious, and that in itself adds another element of charm to the whole thing; seeing what nonsensical dish it comes up with is half the fun.

I took a photo of red potatoes and garlic at the grocery store, and my Tamagotchi somehow turned this into a cute little stack of California rolls. Then I snapped some tomatoes and yellow peppers and it spit back shish kebabs, which seems logical enough. These end up in the “Daily Menu” of the in-device restaurant.

The same color-matching idea shapes your interactions with other characters. When you take your Tama out to “explore,” the character that comes to meet it is determined by the color of the objects seen in your viewfinder. Thus, get ready to see a lot of Hammertchi, a little personified hammer that comes up any time the camera is pointed toward a dark area or, because of the quality, only sees black and brown. Outdoors and in good lighting, though, any number of Tamas might show up.

All said, Bandai’s attempt at augmented reality in the Tamagotchi Pix is cheap and gimmicky, for sure, yet endearing in how unadvanced it feels in comparison to what we’re capable with the phones in our pockets today.

More exciting than some of the AR features are the many minigames housed within the egg. While each Tamagotchi On device only had four games and a couple of little animations, Pix boasts 17. These make use of the touch buttons to add more challenging elements to the games, like swiping at a controlled speed, and rotate daily and by theme so you don’t get bored of just playing the same games back to back every single day. It freshens up the whole experience a lot, making it much more dynamic than the On. In a week of playing with it, I haven’t yet even seen all of the games.

Another thing of note: the software itself feels a lot smoother than that in Tamagotchi On. You can skip right through lengthy dialogues (finally!!) and transition scenes to just get right to whatever it is you wanted to do. The small LCD display is crisp and bright, and the graphics should feel familiar to anyone who has used the previous devices.

It’s fun to take pictures by clicking the top of the egg.

Tamagotchi Pix is only capable of producing low-res, grainy images that are usually either overexposed or heavily shadowed. And you know what? They look really cool. The same way you might trade image quality for aesthetic by picking up a Polaroid or Fujifilm Instax instead of your smartphone, shooting with Tamagotchi Pix is more about novelty than precision. It’s fun to take pictures by clicking the top of the egg and there’s excitement to seeing how they’ll come out. I took my Tamagotchi Pix to an outdoor rave, a drag show, and a graveyard in my first weekend with it and I genuinely love how many of the shots came out. They’re unique. And sticking my characters in ridiculous real world settings, like at said rave or at a Beer World, makes me chuckle every time.

Once you take the photos, they live permanently in the device; you can’t connect to the internet or Bluetooth with this one (that also means no compatibility with the Tamagotchi On app ), and I expect the inability to export your photos will irk many users. But I must remind you again that this is a kids’ toy first, even if there are tons of adults who enjoy it too, and that consideration makes the lack of connectivity feel like a practical, refreshingly cautious decision on Bandai’s part. There are unfortunately a lot of predators out there, and giving kids the ability to transmit photos via the internet would open the door to a lot of potential harm.

Bandai’s workaround for this is cute enough. You can upload your photos to a mock social media feed that lives within the device, and other (fictional) Tamagotchi characters can like them. If you really need the gratification of having real people admire the pictures you took with your Tamagotchi — which, let’s be honest, I certainly do — you can always go the “take a picture of the picture” route and snap a shot of the device with your phone. Seeing the photos framed by the actual Tamagotchi adds to the novelty/nostalgia factor, anyway.

Tamagotchi Pix does come with QR capability, which can be used for “playdates” with other devices and to send gifts (items, food, etc), similar to how you would with Tamagotchi On/Meets. As far as I can tell, though, that doesn’t apply to pictures.

To buy or not to buy?

This one may be a hard sell for newcomers with all of its quirks, but after years without a proper upgrade to the playing experience, I think the real Tamagotchi heads are going to have a lot of fun with Pix.

Tamagotchi Pix retails for roughly $60 which, for the uninitiated, will seem like a lot to shell out for the toy we remember from childhood. As I found first when reviewing its similarly costly predecessor, though, the price tag actually feels pretty reasonable once you get into using the device, which is essentially infinitely playable as long as you’re still interested in it. When you consider that Pix comes with much more to do within its plastic walls than the previous Tamagotchi On and yet costs about the same, it’s really not so bad. Whether or not poor battery life and finicky buttons are deal-breakers for you is a different story. For me, they’re not — though I hope Bandai hears all of these early complaints and implements some fixes.

The real Tamagotchi heads are going to have a lot of fun with Pix.

If you haven’t been dissuaded, grab some rechargeable batteries (something Tamagotchi On owners probably already have) so you’ve got them at the ready when it dies, learn the spots where your buttons are most responsive so you aren’t fruitlessly pressing away, and you’re good to go.

The tech is mediocre, but the *fun* is priceless.