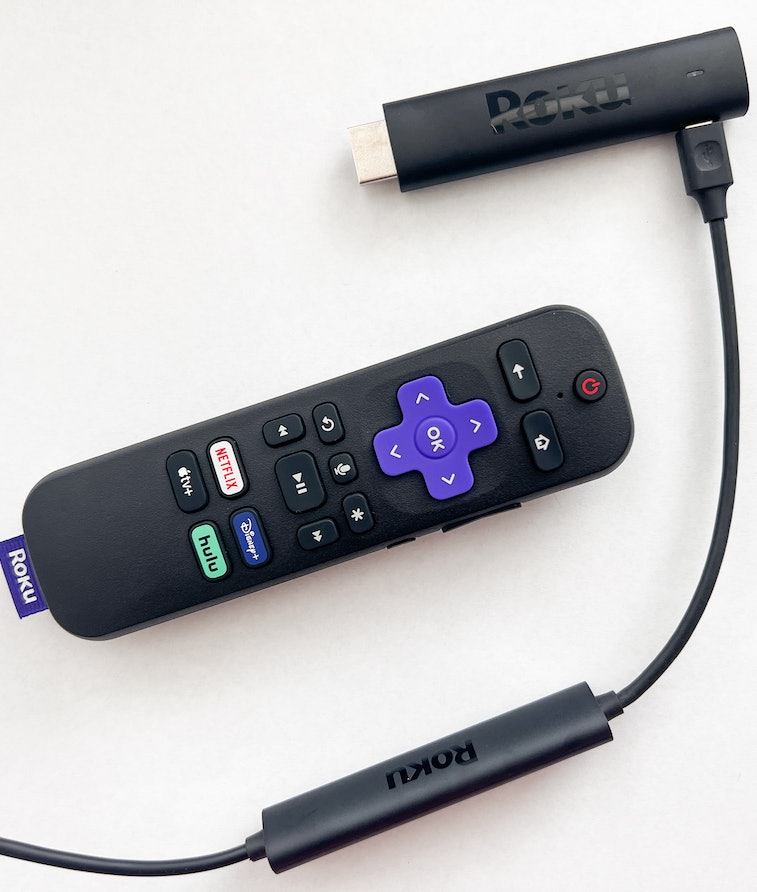 Rokus are interesting products to review because they’re refreshingly boring.

Every year Roku tweaks its lineup to offer a bit of a better value compared to the previous one, and usually, those spec bumps don’t make meaningful waves to warrant buying a new one.

The reason anyone buys a Roku streaming player is out of a strong disdain for their terrific looking 4K HDR TV’s “smart” interface. Think of the visual garbage pumped out to run TVs from Samsung, Vizio, and LG. Stick a Roku on the back that ticks all the boxes your TV can run and never touch that built-in interface again. A tale as old as time.

In that regard, the new Roku Streaming Stick 4K does that job as well as every Streaming Stick before it, just ticking off more boxes. The addition of Dolby Vision to the Streaming Stick 4K this time around means that the $50 device can fit into basically any 4K HDR TV without leaving functionality on the table, with one apparent exception if you go by Roku’s spec page.

But, uh, the Streaming Stick 4K does support Dolby Atmos. No caveats. It just does. I was able to stream content from Disney+, Apple TV+, and Netflix all in Atmos. I confirmed this from the Sonos app for my Arc soundbar, which always indicated the audio output format.

I asked Roku about this contradiction between its specs page and what the device is actually doing. Roku says this is a licensing issue with Dolby. In order to print the Atmos logo on the box, Roku would need to pay Dolby a fee and perform the Atmos decoding process on the streaming device. However, Roku does not need to pay licensing fees if it simply passes through the encoded Atmos data to your AV system to do the decoding on that end. Roku says there should be no difference in audio quality here, so it didn’t pay for the fees. In my experience, I found this to be the case. Dolby Atmos movies sounded just as good from the Streaming Stick 4K on my system as they did from my Atmos-certified Apple TV 4K.

So now I have to evaluate the Streaming Stick 4K not as a good upgrade for legacy TV owners but as a viable option for anyone buying a new TV today. In that regard, the Streaming Stick 4K gets the job done with a few notable caveats, and it’s doing so in a market that’s evolving very fast thanks to new pressure from the likes of Google. The Streaming Stick 4K is a very solid media player, but I fear Roku still needs to do more to stave off competition from Google.

You can grab a Streaming Stick 4K for $50 or pay $70 for the Streaming Stick 4K+ that comes with Roku’s rechargeable “Pro” remote. The Roku remotes now come with quick launch buttons for Netflix, Hulu, Disney+, Apple TV. These are all services I regularly use so I am happy to see them here, but if you want more quick launch buttons that you can customize (and the ability to customize what those branded buttons do), you’ll need to shell out for the Pro remote. Selling remote space is a big part of Roku’s business, but I am at least happy that the company is taking money from entirely mainstream services now.

Inside the Streaming Stick 4K is a new chipset that Roku claims makes the device 30 percent faster to launch. This leads to day-to-day use that’s certainly snappier than other Streaming Sticks I’ve used in the past, but it’s just slow enough for me to notice. The Streaming Stick 4K is quick to start up and turn on my TV. It also launches apps fast enough for most people to be fine with — less than 20 seconds to boot most apps in my testing. If you’re looking for it, you will definitely notice the speed shortcomings here.

Navigating the interface can be a tad delayed at times, with button presses not translating to an animation as quickly as I’d like to see. The speed isn’t a dealbreaker, but if you’re used to something as snappy as an Apple TV, Nvidia Shield TV, and even Roku’s own Ultra, you will notice the sluggishness here. Importantly, I never experienced major lag with the Streaming Stick, something I cannot say about the Chromecast with Google TV (in spite of its very nice interface).

One thing I did appreciate is the memory management of the Streaming Stick 4K. I was able to jump between multiple apps without having to reload them from scratch. You probably don’t watch TV by jumping between apps all the time, but it does equate to faster browsing when you’re looking for something to watch between apps. This is important since Roku OS still doesn’t have a “continue watching” home screen like on Apple TV and Google TV.

The Streaming Stick 4K is still using a micro-USB cable, which is annoying, but you also need to use the pack-in cable to get Wi-Fi as well. The cable has what looks like a tumor to house the Wi-Fi receiver array, both 2.4GHz and 5GHz. I hate micro-USB as much as the next person, but I can live with it on stationary devices that are always plugged in. The cable also helps to get the Wi-Fi antennas away from your TV’s components which are bound to cause interference. It was, however, on the verge of being too short to plug into my wall-mounted TV, so if its length, falling just short of five feet, is too short, you will need to buy a USB extension cable (Roku sells one for $10, but it comes with an extra power adapter, creating unnecessary waste).

The Streaming Stick 4K also has an HDMI 2.0b connector instead of HDMI 2.1. However, Roku says the Streaming Stick 4K hardware is fully HDMI 2.1 capable. When asked to clarify this, Roku says there are lots of features inside the HDMI 2.1 spec that it wants to support. Like higher quality 10-bit video, or quick media switching (QMS) that makes the process of switching your TV’s refresh rate dynamically much smoother to suit the refresh rate of the movie you’re watching. The problem, Roku says, is that it can’t say the Stick has an HDMI 2.1 port unless it supports the full suite of features inside 2.1 including 8K video output. The company says it’s working with the HDMI organization to allow piecemeal support of features.

The lack of HDMI 2.1, for the time being, is more of a future-proofing concern. There isn’t a single streaming service that offers 10-bit video support yet, for starters. Also, the 2021 Apple TV 4K, which has a certified HDMI 2.1 port, doesn’t support other 2.1 features like QMS yet. Just keep this in mind if you’re planning on buying a streaming stick for your HDMI 2.1 equipped TV.

Ultimately, the reason people buy a Roku is simplicity. People of all ages can navigate Roku OS with little issue. I’m sure everyone reading this has a positive story to tell about giving a Roku to an aging relative.

The Roku OS is still as simple as ever, but Roku has made a few updates to the OS that make the experience a bit nicer. Voice search can now launch directly to the show or movie you want in basically any app, including Netflix. The company is also pushing free TV content much more aggressively with updates to the Roku Channel app and a dedicated live-TV tile on the home screen. This isn’t quite the kind of content I want to watch, but Roku says it's something that matters to its customer base.

One feature I really liked about the new OS is a revamped Roku app on iOS that lets you use the company’s long-running Private Listening feature with your own phone and headphones over Bluetooth. When your headphones are paired, open the app and go to the remote tab, then tap the settings to calibrate Private Listening. Running the test records a series of color flashes on your TV and sound to measure the delay. It works really well. What’s better is that multiple people (up to four) can participate in Bluetooth Private Listening. This is a great feature for partners who want to watch their favorite show at night without disturbing their children.

Currently, this is limited to iOS devices, but Android support is coming. It’s also limited to stereo audio, so it’s not going to be as immersive as Spatial Audio using AirPods on an Apple TV 4K. Roku says it can support Spatial Audio on iOS to AirPods, but it would require Apple to first open up some of its APIs.

My only hangup is that Roku’s OS is still a bit too simplistic. The latest update is nicer than before, but the Google TV interface is really, really nice. While the interface that Chromecast runs on is not the quickest, Sony and even longtime Roku partner TCL are making terrific TVs using the Google TV interface. I don’t think it’s an exaggeration to say that Google is one good update away from eating Roku’s lunch with its Chromecast dongle. Roku still has the upper hand, but it would be nice down the line to see it take a crack at cross-app content aggregation. The hardware is as solid as ever, but I’d like to see it treat Google TV as a more serious threat on the software side.

While the lack of information on Atmos support is annoying, the Roku Streaming Stick 4K is yet another solid upgrade to one of the most reliable streaming products around. This is a product you can confidently buy for family and friends as a stocking stuffer, and know it will suit almost any home theater setup they have.

This is a product you can confidently buy for family and friends as a stocking stuffer.

If you consider yourself an AV enthusiast and need to have Ethernet and the fastest software experience Roku has, the upgrade to the Ultra is still worth it. It’s good to know that in terms of content delivery, the Roku Ultra and Streaming Stick 4K are completely identical when it comes to format support. Both of these will work with any 4K HDR TV, and deliver Dolby Atmos audio, even if Roku can’t officially put an Atmos logo on the box for the Stick. When deciding between these two devices, it really comes down to the speed of the experience.