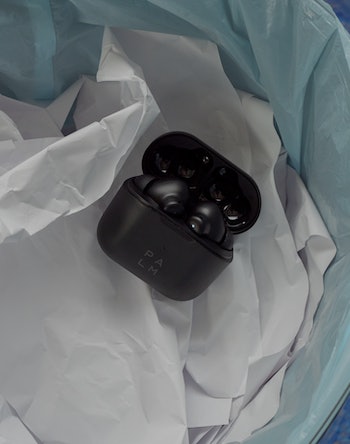 This is not a normal review of the Palm Buds Pro. This is an autopsy.

The $129 Palm Buds Pro are the worst product I’ve ever reviewed at Input. If this was a proper review, I’d leave it at that. They aren’t worth much more digital ink.

Fundamentally, the Palm Buds Pro are cheap generic wireless earbuds with the Palm name slapped on, resold at a ridiculous markup. They feel cheap, sound cheap, and lack so many of the quality-of-life features that are commonplace for wireless earbuds at this price.

Palm Ventures, a company that licenses the Palm name from TCL, is not trying to sell a great product here. I honestly don’t know what the company wants other than to make money in exchange for almost nothing.

If you like burning money, consider the Palm Buds Pro.

As The Verge found, the Palm Buds Pro appear to just use a common OEM wireless earbud design, likely coming from a supplier in Shenzhen, China that sells them in bulk. These Hengyuan wireless earbuds on Amazon, for example, use the exact same design for $80 less. When the site asked Palm Ventures who designed the Palm Buds Pro, it got this shady response: “Palm manufactures the Palm Buds Pro with support from suppliers based out of China.” Do the tea leaf reading yourself. Some company in Shenzhen made these wireless earbuds and Palm gave them notes on what to tweak. From my experience, they needed to give more notes.

According to Palm, they’ve added a 3-mic array to each earbud instead of the single mic the OEM design features. They’ve also tweaked the EQ to their own sound design. However, this doesn’t magically make the Palm Buds Pro a premium product. You’re not getting $80 of value here over the cheapo Hengyuan brand.

Now, there’s nothing actually wrong with using OEM designs. Raycon, the wireless earbuds company that seemingly sponsors every YouTuber on the planet, also uses generic OEM designs. What’s important is that the products you sell work as advertised. Buying thousands of wireless earbuds in bulk from a no-name company in Shenzhen is a perfectly valid business model as long as you do the work to make sure the end product you sell is good. Make sure whatever customizations you implement lead to products that are worth a damn. I personally know some creators who are sponsored by Raycon who’ve told me the buds are fine.

Palm chose a very uncomfortable design when they were shopping for an OEM. It seemed the company cared more about finding something that looked like AirPods Pro than ensuring their buds were comfortable. I never was able to get a comfortable fit on any ear tip, and the wireless earbuds are so light that I felt they could fall out with any strenuous activity. AirPods Pro are also lightweight, but they fit so much nicer in my ear.

My testing actually required two review units. My first review unit was terrible. Mic quality was poor and worst of all, the EQ would seemingly fall back to the OEM default design every time I finished a call. A second unit sent by Palm seems to have resolved the worst bugs I experienced but they didn’t magically make the wireless earbuds better. They’re just usable now. Even working perfectly just means these are bad wireless earbuds that work.

It starts with getting the wireless earbuds to turn on. At first, I thought that the earbuds simply don’t turn on when removed from the case. Then I found the teeniest, tiniest pieces of plastic covering the charging contacts on each earbud. Not only is this single-use plastic waste unnecessary, but it’s so hard to notice I would expect lots of people gullible enough to grab the Palm Buds will miss it too. Palm seems to agree. While the packaging for my initial unit didn’t mention removing any film from the wireless earbuds, my second unit did have a card in the box mentioning that.

Getting auto-wake/sleep to work presented more problems. The status LED on the case blinks constantly whenever it’s charging the wireless earbuds, regardless if the case is plugged in or not. A Palm spokesperson told Input that this was an intentional choice to let people know their earbuds are done charging. A physical button on the case would’ve allowed the same functionality. This is the first of many shortcomings that make the Palm Buds Pro, which again sell for around $100, feel like a bargain bin product.

There is no vision with the Palm Buds Pro.

I’m going to list the rest of their failures as quickly as I can.

Palm’s EQ choices here seem to be designed entirely around compensating for the poor audio components inside these wireless earbuds. They favor bass way too strongly, like early-era Beats headphones. They sound fine but nowhere near as good as other wireless earbuds in this price range. Audio is muddy, and while bass-heavy tracks are a bit more exciting and have extra impact, any balanced tracks get drowned out by their low-end. This makes the audacity of their product page comparisons to AirPods Pro all the more comical.

Active noise cancellation (ANC) was barely effective on my review unit. It didn’t sound horrible, it just wasn’t very effective. Palm’s promised “environmental noise cancellation” is pretty ineffective from my experience. I called people in multiple noisy environments and everyone could tell if I was in an echoey room, or a room with an appliance running. This is not the exceptional call quality I experienced with the bone conduction sensors on Jabra’s Elite 7 Pro. While I was told my voice sounded awful on my first review unit, the audio was much better on the second unit. That seems to be the only place Palm’s extra microphones made a difference given how mediocre ANC was.

There was also a call-related bug that was persistent across both review units. Every time I hung up a phone call, I’d have to re-enable ANC with a long press. Palm said this was a bug but I’m not encouraged since it’s present on the second unit as well. Another irritating choice: ANC and Transparency modes aren’t sticky when you put them back in the case. You need to turn ANC back on every time you take the earbuds out. Palm says this choice was made to preserve battery life, but given how little of a difference the ANC makes, I can see users not even noticing the ANC is off to begin with.

There isn’t a huge win to be found on the Palm Buds Pro. The best things about them are still extremely mediocre compared to other wireless earbuds in this price category, and their negatives continually betray them as the cheapo wireless earbuds they really are. The wireless earbuds and the plastic case feels cheap; they aren’t very comfortable; and the touch controls are finicky and can’t be customized. Because there’s no app, there’s no way to update their firmware either or fix the EQ yourself.

I can’t say any of this surprised me. Palm was a darling of tech nerds but years of mismanagement ultimately doomed it. After HP shuttered Palm in 2011 (barely a year after acquiring the company for scraps), webOS, the fledgling but promising software the original Palm had developed for multitasking in the smartphone era, was sold to LG where it became the foundation for the company’s smart TVs. Software was half the reason so many tech fans loved Palm. webOS and PalmOS before it were truly innovative in their time. Had Palm been better run, we could be living in a world of iOS, Android, and webOS devices fighting for our smartphone dollars.

Without the software, Palm was just a name. That name was eventually gobbled up by the company that would become Palm Ventures in late 2014, with the help of TCL That’s when development began on a new product, the Palm phone, which launched in 2018. With Golden State Warriors’ Steph Curry brought on as a brand ambassador (also helping with product design choices if you believe Palm) and a somewhat promising concept behind its first product thanks to manufacturing support from TCL, it looked like Palm Ventures was on the cusp of making some kind of “fetch” happen with the Palm phone.

The Palm phone’s concept was simple. It was a small smartphone meant to be used as a companion to your regular big smartphone as a way to force you to use your phone less on days you realistically didn’t need it that much. A “weekend phone” of sorts for when you don’t always need to be checking emails and texting, but may need to fire off the odd message while you listen to Spotify in the park. The problem was that the Palm phone sucked. Reviewers trashed its battery life and the annoying ways Verizon, the exclusive carrier for the phone, forced you to use its horrible services so your text messages would properly forward. It wasn’t helped by the fact that “demand” for small phones as a whole is more of a pipe dream for a select few tech enthusiasts (myself included), as opposed to something consumers as a whole are actually clamoring for.

But for all its problems, the Palm phone was at least a coherent idea with a product vision. It was clearly a failure for Palm Ventures. The product page is still on Palm’s website but the phone has been discontinued. TCL has moved on to making smartphones, tablets, and foldable concept devices under its own brand for the time being.

When asked about the relationship with TCL, a Palm Ventures spokesperson told Input:

“TCL is Palm’s smartphone manufacturing partner, however (TCL) does not manufacture the Palm Buds Pro. TCL was also a seed investor among other investors. We have also secured a global exclusive licensing agreement with TCL for the Palm trademark and are a separate San Francisco-based company.”

There is no vision with the Palm Buds Pro. They’re mediocre wireless earbuds sold at a huge markup for no apparent value to consumers. This company doesn’t want to make the tech world better, or offer a unique vision for the new category it’s focused on now. It wants to sucker people in with Palm’s once-renowned brand. Don’t fall for it. Jabra’s Elite 3 earbuds are a terrific budget offering, the Nothing (Ear 1) actually have a unique design and better sound, and the Beats Studio Buds are more comfortable and sound better for about $20 more.

The Palm Buds Pro are the worst product I’ve ever reviewed at Input.

If the will to make some kind of phone product work is still alive, I would like to see Palm keep trying. But if reselling generic and low-quality gadgets is the future of this company, then we should all write Palm off.

Steph Curry is still there for the moment. Funnily enough, his dedicated page on Palm’s website only mentions the Palm phone. He is featured on the bottom of the homepage for the Palm Buds Pro, however, quoted saying, “The Palm Buds Pro are the go-to for all my training sessions...”