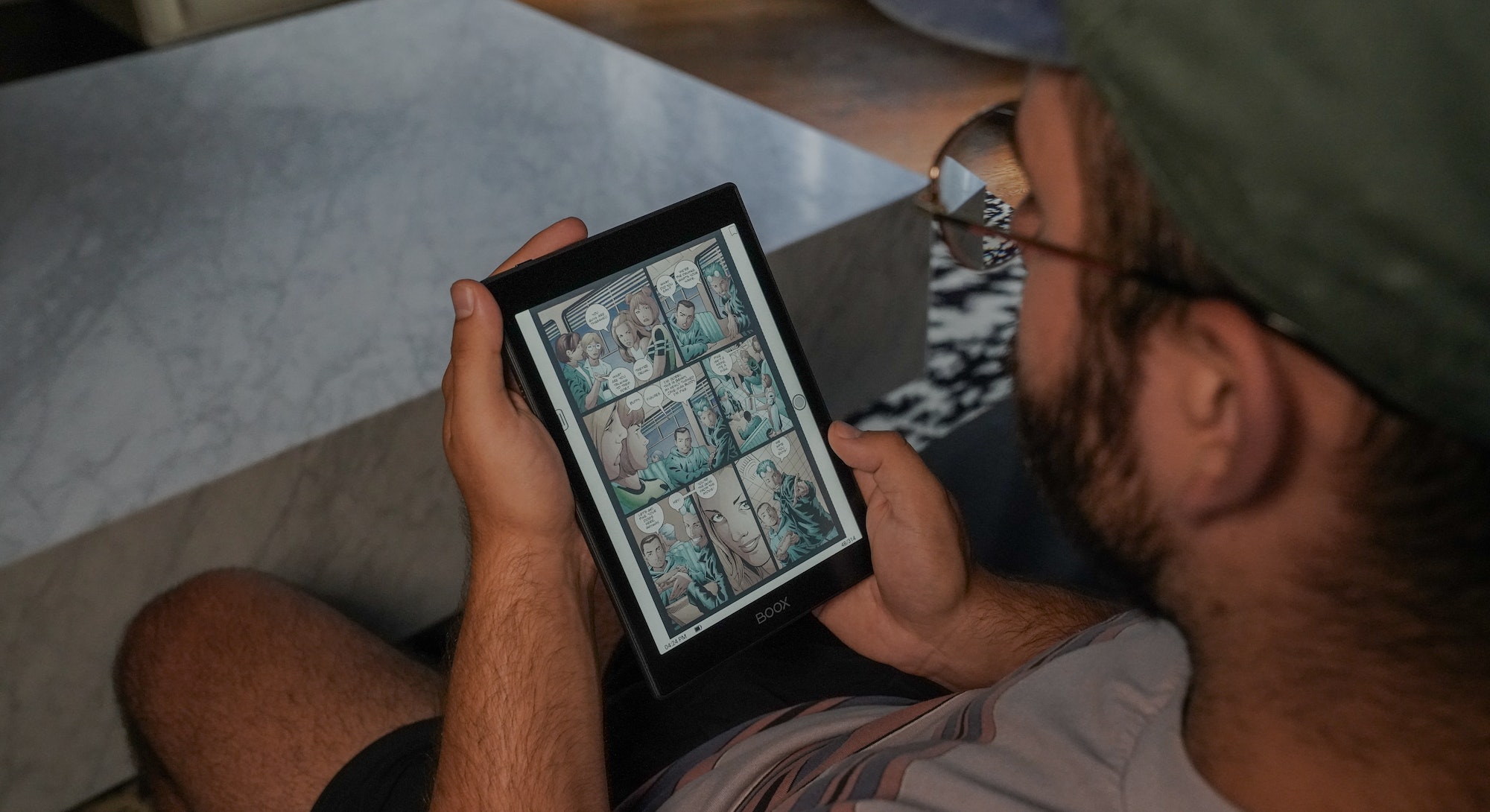 Onyx’s Boox Nova Air C boasts one of the most sought-after e-reader features around: a color E Ink screen.

It’s certainly the most pressing reason I’d tell you to buy the Nova Air C — though I’d also be sure to warn you about the price you’ll pay for enjoying all those inky colors.

The Nova Air C is essentially the same Nova Air that Onyx put out last year, albeit with a Kaleido Plus color E Ink screen instead of a regular black-and-white E Ink Carta display. The Nova Air C’s internal upgrades are minimal; a heavily modified version of Android 11 replaces last year’s 10 release, and the device’s octa-core CPU is now Qualcomm’s Snapdragon 662 versus the Nova Air’s Snapdragon 636. Both the Nova Air and the Air C have 3GB of LPDDR4X RAM.

Like its most direct predecessor, the Nova Air C straddles the line between tablet and e-reader. When I reviewed the Nova Air last year, I found this blend to be problematic, especially in that many of the Nova Air’s more expansive features — like the ability to run full Android apps — are rendered less useful by compatibility issues. There’s just enough friction to make some activities feel entirely fruitless on the Nova Air C.

This isn’t to say that the Nova Air C doesn’t have its merits. Reading novels or comics on the 7.8-inch screen is generally delightful, even if getting your ebooks on the device isn’t as easy as it would be with a Kindle or a Kobo.

The Nova Air C features the latest Kaleido Plus screen with On-Cell Touch, Android 11, and the latest Boox firmware.

The Nova Air C’s E Ink screen gives it a very e-reader feel, though its body is nothing like what we’ve come to expect from, say, Amazon’s Kindles. At first I found the tall metal casing to be a bit off-putting (I value most e-reader manufacturers’ willingness to make them feel less like you’re holding a computing device) but quickly found it to be well-balanced and easy to hold for long periods of time. The backlit E Ink screen is ideal in most lighting situations, though the thin pane of matte glass covering the front of the device does attract some glare under harsh fluorescents or direct sunlight.

My favorite thing about using the Air C as an e-reader is that, unlike Kindle or Kobo, Boox devices aren’t tied to any one corporate ebook store. There’s no Boox store pre-installed on the device; the “store” menu tab simply loads up curated lists from Project Gutenberg, a free open-source ebook collection. You can buy ebooks just about anywhere, instead of tossing that cash to Amazon, for example.

Onyx has made it super easy to load up your purchases onto the Nova Air C, too, either via USB-C or over Wi-Fi. The built-in BooxDrop app opens up an IP port on the device that’s then accessible from any other device on your Wi-Fi network. You can also sign up for a free Boox account and send files to the Air C without being on the same network.

For some readers, though, this extra step could be an impediment; it certainly takes more work than hitting the “Buy” button on Amazon’s ebook store and having the title appear in your library moments later. That is perhaps the only thing holding back the Nova Air C from being a true Kindle competitor: It’s just not that easy to use.

The Nova Air C’s biggest selling point is that color-capable E Ink screen, a relative anomaly in the e-reader world. The color rendering is noticeably impressive even just from the device’s startup and lock screens, both of which take full advantage of the Kaleido Plus screen’s color capabilities. These aren’t the vibrant shades we’ve grown accustomed to seeing on our smartphone screens; they’re muted by the E Ink, making them both easier on the eyes and less attention-grabbing on the whole.

The color E ink screen is best used for reading comics, graphic novels, and other image-heavy texts, and that’s probably the best argument there is for scooping up the Nova Air C over any other e-reader. Besides being able to install any of the dozens of great comic or manga apps available on Google's Play Store, the Nova Air C also natively supports common comic formats like .cbr and .cbz. Combined with how effortless it is to transfer files to the device, this makes the Air C a great buy for someone with a large electronic comic book library.

There is one thing holding back this colorful experience, and that’s the E Ink technology itself. “Ghosting” — a fairly common problem with E Ink screens wherein after-images can be seen lurking behind new ones — is more noticeable by the addition of full color. It’s kind of like the ink from one side of the page is leaking through to the image on the flip side. The extent of this ghosting varies greatly from comic to comic and even from page to page. It’s particularly noticeable when browsing the web or using Android apps. (Onyx has built in a setting to do a “full refresh” of the screen more often, if this really grates on your nerves, but beware: doing so will affect battery life.)

The Kaleido Plus screen’s colors are, on the whole, pretty faded and low-resolution, but they’re still a lot more color than you’ll find on most E Ink devices.

Android, minus the fun

Compatibility issues range from minor annoyances to rendering some apps unusable. Something as simple as using a third-party reading app — like those offered by Kobo or Amazon — can be an exercise in futility. Sometimes buttons just don’t show up; other times they do and are very difficult to click. Apps that are heavy on animation or swiping inputs feel laggy on the E Ink screen, making even simple tasks like scrolling a media outlet’s home page difficult.

The Nova Air C is a solid look at how color E Ink could change the e-reader game.

It’s impossible to tell just how compatible an app will be before installing it, so you might run through a few different note-taking options before finding one that’s actually able to tap into the screen’s impressive touch sensors. These hit-or-miss extremes mean it’s generally easier to just use the pre-installed apps instead. Note-taking using the Nova Air C’s built-in app is super responsive, yes, but it would be nice to use, say, Evernote or OneNote if that’s where all your notes are backed up. It is, after all, what Onyx has promised buyers.

These compatibility issues are, unfortunately enough, made even more apparent by the Nova Air C’s color capabilities. As I briefly touched upon above, the Kaleido Plus can’t render color images quite as well as it can black-and-white ones. Pixel density goes from 300 ppi — a gold standard for the e-reader market — down to a meager 100 ppi when color is involved. Don’t even bother installing Instagram or YouTube on this device.

All told, the Nova Air C is a slight step up from the Nova Air, and, like its grayscale sibling, it’s well-suited to a very specific kind of customer. If you’re looking for a way to read electronic comic books in variable lighting environments, the Nova Air C’s Kaleido Plus screen is basically the best way to do so. It’s also a great option for vigorous note-takers (especially given that the Boox Stylus is packaged with the Nova Air C), though these customers could also go for the plain-old Nova Air for a similar experience at a $100 cheaper price point.

As an e-reader fan, I am impressed with Onyx’s willingness to push the boundaries of E Ink devices, something e-reader industry leaders seem afraid of. The Nova Air C is a solid look at how color E Ink could change the e-reader game. If Onyx manages to improve app compatibility (a daunting task, to be sure), the Boox series could really shake up Amazon’s Kindle empire.