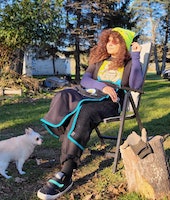 Mozy claims to be 5 times warmer than a stadium blanket.

When I first got the emailed pitch for Mozy, an article of outerwear described as a “jacket for your legs,” I will admit I snorted a little. It’s... a skirt, I thought, scrolling through the pictures.

Indeed, it is just a garment that wraps around your legs from hip to ankle, fitting over your other clothes to keep your warmth in. And yet, looking at the images of models posed at tailgates and laughing in the snow wearing what appears, more or less, to be sleeping bags with the bottoms cut off, a second thought (which I’m not proud of) occurred: I need this.

Such is the life of a person who simply becomes a baby when it’s cold outside.

The people behind Mozy make some pretty compelling promises about the product’s heat-trapping capabilities, particularly this one: “The Mozy is over 5x warmer than a stadium blanket and almost 10x warmer than jeans alone.” Those numbers come from a test the company says its engineers conducted using a dummy, in which they measured loss of body heat over time. Per the team’s findings, “The Mozy lost only 6 degrees Fahrenheit, a stadium blanket 32 degrees, and jeans 56 degrees.”

Intrigued, I replied, and some samples to test arrived not long after.

Now, New York has had a pretty bizarre autumn, weatherwise. It was T-shirt weather right up until Halloween then immediately became frigid for, like, three days and then turned warmish again, so I had the unique opportunity to try out Mozy under a few different conditions in a relatively short period of time.

Let’s start with the fit. There are three options for size, each of which accounts for a wide degree of individual body variations:

I asked for the Adult 400 and the company sent both the standard Mozy, which has a weatherproof outer layer, and the “Softshell” model which, as the name implies, uses a soft fabric outer and is thus less protective against rain and the like. And both really do allow for a lot of adjustment. I put on the regular Mozy — I’m 5’8” and have a body type that could be described as athletic-ish — and my friend who has at least six inches and 40 pounds on me put on the other, same size, and they fit both of us perfectly. Like a wrap skirt, you just pull it around you to where it hugs your body best. This design also means your legs are pretty free to move around.

When I first tried it, the temperature outside was in the upper 60s and, predictably, I felt way too hot after wearing Mozy for a little while. But a couple of weeks later, when that first frost crept in, Mozy found its time to shine.

My friends and I spend a lot of time outside sitting around fires. For some people, the fire alone is enough to keep them warm — I am not one of those people. I’m always freezing, meaning I have to sit so close to the fire that I end up feeling like my face is melting off while my ass remains encased in ice. Mozy genuinely helped with this issue.

Having it secured around my lower body kept me cozy from the waist down but left my hands free to warm in front of the fire without having to essentially stand in it. And it has pockets!! Multiple, big pockets!! You can stick a beer in there, your phone, the four Tamagotchis I’m sure everyone carries around… whatever. The pockets are great. If you’re used to wrapping a blanket around yourself to protect against the elements, you’re probably also used to having to constantly adjust it to keep it from falling down, which is not only annoying but keeps your hands too busy to effectively hold or do other things. Once Mozy is on, it’s staying there until you take it off.

The takeaway? Mozy is great. There’s nothing complex about it. It delivered on its promise to keep me warm, is pretty unobtrusive so I didn’t feel like a doofus wearing it, and has cute little details like the option for customizable patches and an attached carabiner strap. The difference between the hard and soft shells really comes down to preference and what environments you think you’ll need it for. If it’s drizzling, windy, or snowy, you might want the protection of the more rugged Mozy. If it’s simply cold out, you’d do fine with the Softshell option. Consider it like choosing between a fleece and a lined windbreaker.

I only had one issue with Mozy but, for me, it’s a big one: the price. Mozy Softshell costs $119 at full price, though it’s currently discounted to $69, and the weatherproof Mozy normally costs $149 ($85 with the sale). That is mind-boggling. At the sale prices, each one of these is a totally reasonable purchase. At full price? I’d imagine it’s just too hard to rationalize for most people.