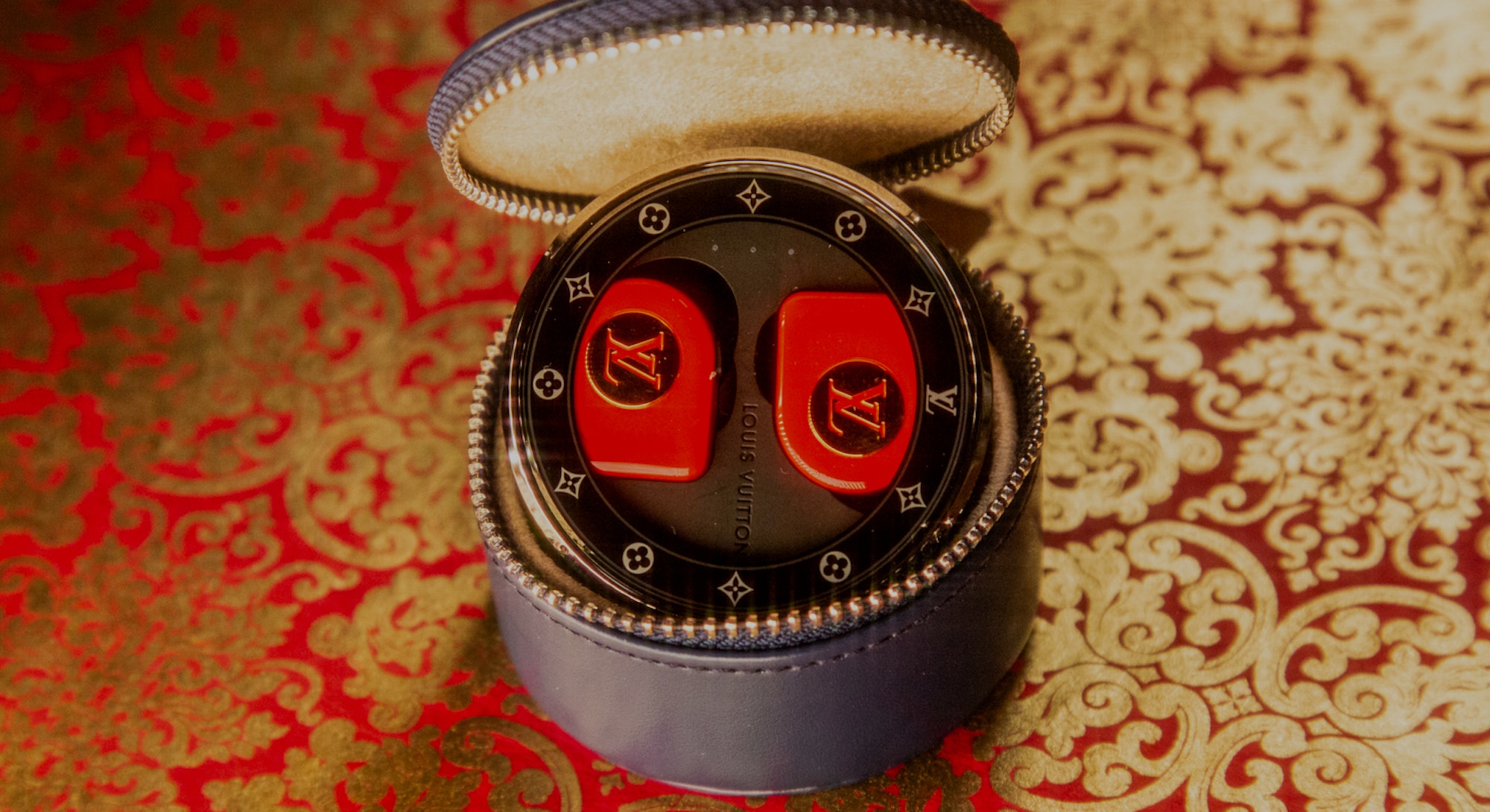 Not every brand is lucky (or good) enough to collaborate with Louis Vuitton. So in 2019, when New York City-based audio maker Master & Dynamic announced it had worked with the French fashion house on a pair of wireless earbuds, the Horizon Earphones, I was immediately intrigued.

Sadly, as much as I loved the look of them, the lack of noise-cancelling was a deal-breaker for me — especially when they cost almost $1,000. In these NYC streets I roam daily, I need to block out as much outside noise as possible.

Thankfully for me, and anyone else who fancied the first generation of LV’s luxury earbuds, we now have the Horizon Earphones 2.0. Introduced earlier this month, Master & Dynamic and Louis Vuitton revamped their wireless set with a refined look that features a coated stainless steel housing, 10mm beryllium drivers, wireless charging, USB-C and, most importantly, active noise cancelling.

The new Horizon Earphones are basically a rebadged version of Master & Dynamic's flagship MW07 Plus wireless earbuds, which cost $299 compared to $1,090 for the Louis Vuitton earphones. In other words, you’re paying close to $800 more for the LV name and everything associated with it, such as high-end craftsmanship, and included leather goods that you don't get with the regular MW07 Plus earbuds. For a certain kind of buyer, one who’s used to buying high fashion items, spending that extra cash isn't an issue.

Before we get to the sound, which is arguably the most important aspect of wireless earbuds, let’s gush about aesthetic. This is, after all, a Louis Vuitton product. You can get the Horizon Earphones 2.0 in a variety of colors: white, black, red, fluorescent yellow and pink, each decorated with details designed to appeal to the fashion crowd. The first four colored earbuds all have a housing with the signature “LV” logo on them, complemented by a single line of text on each side that simply reads “VUITTON.” The pink pair, meanwhile, features Louis Vuitton’s iconic flower monogram pattern.

Our review units came in black, fluorescent yellow, and red, and I gotta say, the latter two are definitely my favorites — they’re flashy yet subtle. Another detail I love about the Horizon Earphones 2.0 is the wireless charging case, a cylinder that’s made out of sapphire glass (you'd need to take a diamond to it scratch it) and a ceramic base that has the Louis Vuitton logo. It's bulkier and heavier than the Apple's AirPods Pro case, but that's a tradeoff I'm willing to make in order to get a case that feels equally solid and elegant.

Depending on the color of wireless earbuds you buy, the case can be shiny or matte black (for the red, fluorescent yellow, and black pairs), or glossy silver (white, pink). Better yet, the charging case comes with a carrying pouch of its own, made out of a navy leather and a light peach suede.

The charging case for the Horizons isn’t just pretty — it has real utility. Three small LEDs let you know when the earbuds are charging, or how much of a charge is in them. Red tells you your battery level is low (1 to 29 percent), orange is medium, and green means you’re on the high end (70 to 100 percent). It’s similar to what you get with the charger on the MW07 Plus, with the only difference being the placement of the LEDs on the inside or outside of the case.

8 hrs with noise-cancellation is exceptionally great and mops the floor with AirPods Pro.

Also great: the Earphones 2.0 charge up really fast and the case supports wireless charging. The whole package (earbuds and case) charged up to about 50 percent in about 20 minutes.

I’ve used them for nearly a week during my commute, paired to my iPhone and laptop, and I’ve yet to have to charge the case. It’s nice to not have to worry about them dying often, which is something that happens almost every other day with my AirPods Pro, particularly when I forget to charge the case. When you combine the high fashion design with great battery life, what you get is a package that feels exquisitely premium. And that’s exactly what you should expect when you're spending close to $1,100 on a pair of earbuds.

A sound to match

Okay, now that I've confirmed it drips, let’s talk sound quality. Master & Dynamic says that the Horizon Earphones 2.0 have custom 10mm drivers that are designed to offer its “warm signature sound,” which tends to lean toward a more natural profile with rich acoustics.

This can easily be subjective, but what I can tell you is that they sound fantastic — even better than my AirPods Pro, dare I say. I was fully surprised when I started blasting hip-hop and noticed the amount of bass on the Horizon Earphones 2.0, which isn’t something I was expecting. At the same time, though, the bass wasn’t so strong that it drowned out vocals on songs.

Our editor-in-chief (and former music producer), Joshua Topolsky, tried them as well and had this to say:

The Horizons sound incredibly good for such a small package. Bass was warm and very present, and high end didn’t have the brittleness you find in a lot of earbuds recently (the Galaxy Buds are a great example of this). Mid-range comes through with an almost buttery quality, and there’s a surprising amount of sub that’s carried by the drivers here. One thing that struck me, however, was that the maximum overall volume of the Horizons seemed a bit on the quiet side.

By comparison to something like the Jabra 65t (which I can’t crank because they’re too loud), I wanted one or two more notches of volume here. I don’t need earbuds to deafen me, and they sounded plenty loud on modern tracks which tend to be brick-wall limited (extremely compressed) and less dynamic. But on older or acoustic tracks, I felt that without secondary limiting (additional normalization or compression in your music apps), the levels, even when maxed out, are a bit low.

On that point, while the Horizon Earphones 2.0 do have an excellent balance of lows, mids, and highs as a default — regardless of the genre of music you’re listening to — I wish there was an app where I could select different audio presets or tinker with the EQ. Yes, you can change audio profiles on whatever music streaming app you’re using, but it would be nice to have a native one where I could see and change detailed features of the earbuds, including battery life and sound. Bose and most other premium headphone makers have apps for tweaking the EQ so what's Master & Dynamic's excuse?

As far as the active noise-cancelling goes, I didn’t have any issues at all. When it’s on, I can hardly hear anyone or anything happening around me. If you want to turn it off and let ambient sound in, just push the button on the left earbud for a couple of seconds and a sound will let you know when you're in ambient mode and not. Personally, I like to turn off noise-cancelling when I’m at my work office. Otherwise, I won’t be able to hear when someone is trying to speak to me, even if they’re close — that’s how good the effect is.

And if you care about using your earbuds to be social, there is a built-in microphone that lets you make or receive phone calls. There’s also a button on the right earbud that you can hold down to sac Siri or another voice assistant. Unfortunately, with the Horizon Earphones 2.0 there's no hands-free mode, so anytime I want to say something “Hey Siri, call my little sister,” I have to press the button first. It's not the end of the world, but I do use that functionality quite often on my AirPods Pro, and I found myself missing it on the Horizon Earphones 2.0.

The cost of luxury

Ultimately, the retail price of the Horizon Earphones 2.0 means they’re not going to be for everyone. They're a luxury product through and through — down to the LV leather strap that keeps the USB-C cable together — and you’re definitely paying for the brand name. But, if you can afford the $1,090, you’re not going to be disappointed with their look, sound, and battery life. They’re really great wireless earbuds that just happen to cost significantly more than the average pair.

For those who can live without the Louis Vuitton branding, though, well, there’s always the Master & Dynamic MW07 Plus, which offer similar sound and battery life at a fraction of the cost ($299). I, for one, know I haven’t touched my AirPods Pro since I got the new Horizon Earphones 2.0, and I don’t plan on looking back.

The luxury brand puts its spin on Master & Dynamic's stellar earbuds. The result is rich in sound... and price.