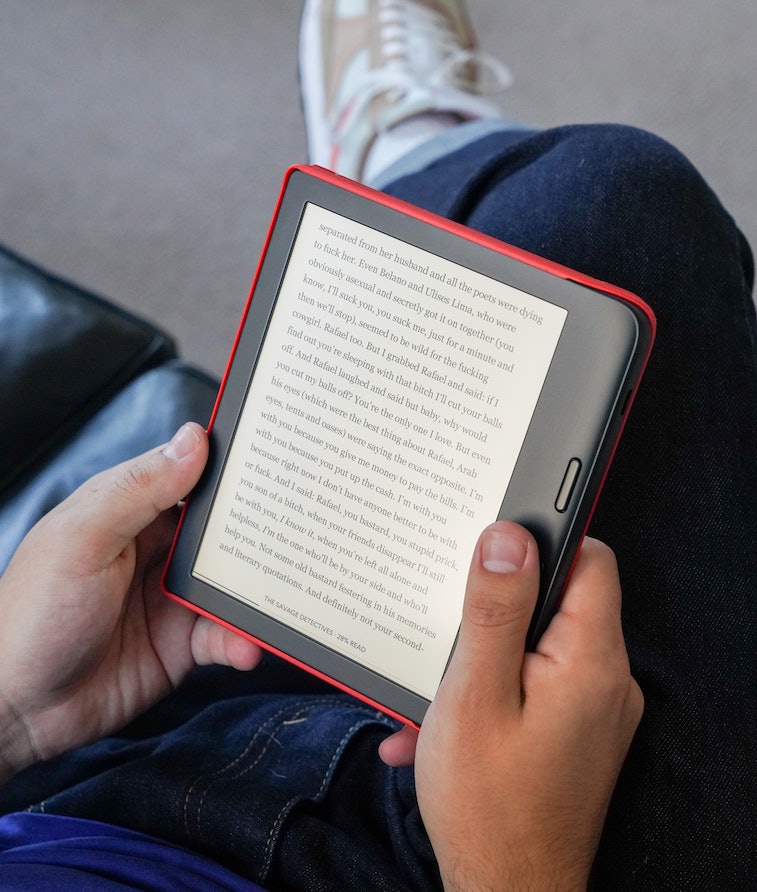 Kobo’s Libra H2O helped me fall in love with e-readers again after Amazon’s monopolistic practices left an acrid taste in the back of my throat.

After feeling cornered by Kindles for years, the Libra was a spring of the purest digital water. The Libra 2 is just as refreshing, now with adjustments to bring Kobo’s best into the new decade.

The Libra 2 — the H2O has been dropped from its name — looks nothing like its cousin the Kindle Paperwhite. The hardware is streamlined, yes, but not to the point where all that’s left is a screen. The first thing you’ll notice with the Libra 2 is its asymmetry: the right-side bezel extends outward a few inches to house the device’s physical page-turn buttons.

This hardware quirk is demonstrative of the Libra 2’s greatest gift to readers. Rather than fumbling around for a hand-hold (as I found to often be a struggle with the Paperwhite), Kobo has given us the perfect place to hold our electronic books one-handed. It’s this kind of design decision that sets the Libra 2 apart from the rest of the e-reader market.

The Libra 2 sports a 7-inch E Ink Carta 1200 touchscreen, a significant step up in terms of speed over its predecessor. Kobo has chosen to stick with the same front design as the first Libra, with the touchscreen inset slightly — the exact opposite of the Kindle’s full-flush front, where the seams between the screen and the bezels are imperceptible.

There’s no plastic covering the screen at all, actually. This choice, coupled with the screen’s slight depression, saves the front of the Libra 2 from the worst of the Kindle’s glaring fingerprint issues. It comes with its own downsides, though. Crumbs, sand, and other debris are much more likely to end up stuck between the screen and the bezels. This won’t be a problem if you’re a pristine reader, but I suspect most people want to use their e-reader in a wide variety of circumstances — some of which are, yes, messy. The good news is that, despite not having any covering on the screen, the Libra 2 has an IPX8 waterproof rating. You can submerge it in up to two meters of water before running into any issues. Poolside and bathtub reading shouldn’t present any issues at all.

The screen’s speed boost is noticeable next to the first Libra. This came as a pleasant surprise to me, because I always found the original Libra’s screen to already be pretty fast. Flipping pages with both the physical buttons and touch gestures is just a little smoother. The same goes for navigating the Kobo store and highlighting passages. The overall experience is a little closer to what you’d expect from a non-E Ink touchscreen.

The back of the Libra 2 is identical to the H2O: a matte, slip-proof pattern of dots that, while definitely not book-like, feels natural enough in the hand. The back honestly didn’t factor into my testing experience all that much, though, because I’ve fallen hard for the Libra 2’s flagship accessory: the SleepCover.

The SleepCover, which is available in Poppy Red, Slate Blue, Lavender, or black, is both functional and cute. It’s first and foremost protective; the Libra 2 snaps into the hard plastic bottom portion of the case, and the more flexible front flap folds over the Kobo’s screen like a book. The inside of that front flap is made of this gray microfiber that feels cushiony enough to actually stop the screen from picking up scratches while it bounces around in my backpack, and the back is solid enough to save the e-reader if I drop it on the sidewalk.

While certainly not necessary for an enjoyable reading experience, I’d say the SleepCover is well worth $40. There’s something very enjoyable about flipping open the cover to start reading — the screen turns on automatically when you do — as if you’ve just opened a hardcover to where you left off rather than booting up an electronic device. The front flap also folds up into a little triangle stand so you can rest your Libra 2 at a comfortable reading angle on a table.

The actual reading experience on the Libra 2 is vastly unchanged from the first Libra — and from Kobo’s other contemporary e-readers, really. That’s a good thing. Kobo’s software is simple and self-explanatory. There’s no learning curve to browsing the Kobo Store or reading a book. It’s all just right there in front of you. The physical page-turning buttons are really the star of the show here. The tactile experience of pressing a button with your thumb (and that satisfying click) is just so much more pleasurable than tapping a touchscreen. The adjustable-warmth backlight is the same as the Libra H2O’s, which is to say it’s very useful in just about any lighting situation.

This is not to say the reading experience is perfect. Kobo’s software does experience the occasional hiccup. Highlighting can be particularly frustrating on the Libra 2. While the screen is certainly more responsive this time around, there’s still varying degrees of lag between sliding your screen along the text and the actual highlight showing up. When you do end up with an imperfect highlight, grabbing onto the little anchors on either end of the highlight to correct it ends up being more trouble than it’s worth. And don’t even get me started on highlighting passages that span more than one page.

The only other issue I’ve had with reading on the Libra 2 is the occasional “ghosting” — when an image from the previous screen overlays the current one. This is a common-enough experience on E Ink screens that I’ve grown used to it, after using them for a decade or so, but it’s still at times disorienting, especially after viewing a full-page picture. Kobo’s software “refreshes” the screen every chapter by default, but you can change this to every certain number of pages if it becomes a problem for you. Just be aware that a more-frequent refresh rate will decrease overall battery life — hence why the default is only once per chapter.

But not all reading on the Libra 2 even uses the screen. The Libra 2 includes Kobo’s first-ever Bluetooth functionality, which in turn enables audiobook capabilities. In my testing, I found the feature very smooth. Connecting to a pair of headphones or a speaker is just as easy as doing so from your phone.

The audiobook experience itself is also very similar to what you’d find in a smartphone audiobook app: basic playback controls, a menu to change narration speed, a chapter-selection tool, a book cover in the center of the screen. Some quality-of-life features — like the ability to continue playback while the screen is off or to use your headphones’ play/pause functionality — prove Kobo spent time getting this right. The Libra 2’s newest flagship feature has been well-integrated into the e-reader experience.

The only thing is...I’m not really sure that an e-reader needs audiobook functionality. Sure, the Kindle Paperwhite has it, so the Libra 2 is definitely more competitive with Bluetooth than without. But in almost every case where I’d find myself listening to an audiobook, it’s just much easier to do so from a dedicated app on my smartphone. The best part of an e-reader is the paper-like screen — which does nothing to improve the audiobook experience. Using the Bluetooth connection frequently will also take a fair amount more battery power than an E Ink screen does on its own. The “weeks” of battery life the Libra 2 is rated for doesn’t include regular audiobook use.

The most rewarding reading experience I’ve had on an electronic device.

It’s also quite frustrating that Kobo has only enabled audiobook functionality for titles purchased through its own digital store. One of my favorite parts of Kobo’s software is its direct link to OverDrive, the app used by public libraries across the U.S. for electronic lending. Overdrive has a wide selection of audiobooks, too, presenting the perfect opportunity for Kobo to integrate audiobook rentals into the Libra 2. You can’t load up audiobooks purchased from other sources, either. A confusing choice, given Kobo’s usual willingness to allow third-party compatibility.

Even so, the Libra 2 is far more open than its closest competitor, the Kindle Paperwhite. The Kobo Store is still the only way you can purchase ebooks from the device itself, but those purchases aren’t locked to the Kobo ecosystem in the way your Kindle books are bolted tight to your Amazon account. If at any point you decide to leave your Libra 2 behind for another company, you can take your entire library of books with you. And you can purchase your ebooks elsewhere for use on the Libra 2 — you’ll just have to load them onto it via USB cable.

I wish I could say the Libra 2 is the perfect e-reader, but I don’t think we’re there just yet. I’d say that more than 90 percent of my time reading on the Libra 2 is just as enjoyable as reading a paperback — the experience an e-reader is always chasing. The Libra 2 hasn’t beat good old paper and ink just yet. It’s closer than Kobo’s ever come to reaching that point, though, and by far the most rewarding reading experience I’ve had on an electronic device.