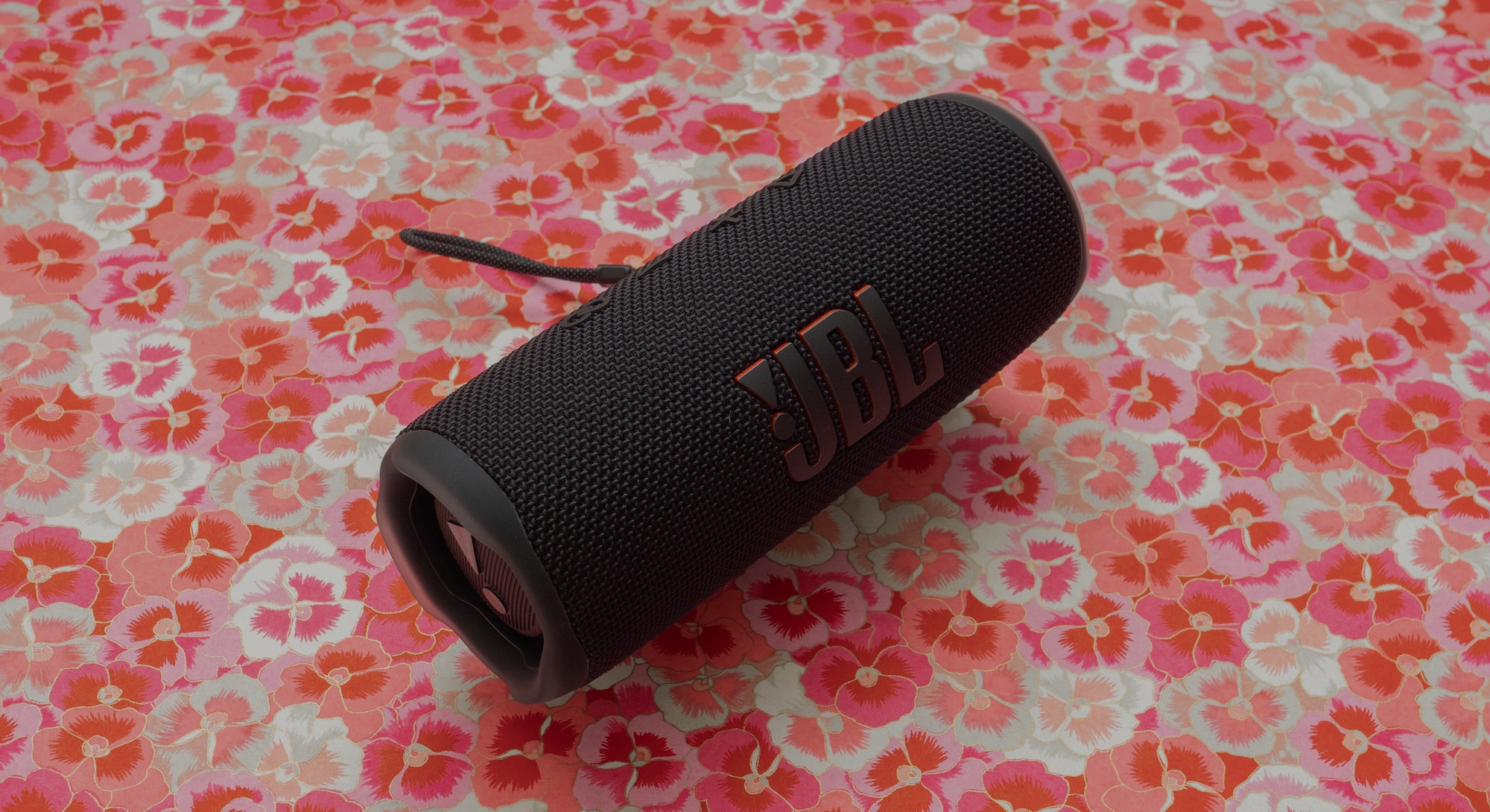 JBL’s Flip speakers are arguably the product synonymous with “Bluetooth speaker” for most people. After the fall of the Jawbone Jambox and the rise of cylindrical speakers, the Flip became the perfect product to embody the vision for a small but loud speaker that can go anywhere.

JBL has not been keen to let the Flip stagnate, sitting now at its sixth iteration and arguably the most dramatic.

The new $129 Flip 6 is more durable than ever thanks to an official IP67 rating (the Flip 5 was IPX7) and a completely new internal design to make it even louder. It still maintains JBL’s trademark design language with its exposed radiators that you can feel shake as it plays music. The Flip 6 also swaps the orange JBL logo for a bolder front badge that takes up a good chunk of the speaker’s face.

The Flip 6 is certainly loud and clear in most instances, but in my testing, JBL hasn’t done quite enough here to make me fall in love with this speaker like so many have with prior Flip models.

The JBL Flip 6 is fine for a Bluetooth speaker, but there are so many better options.

I’ll start with size and design, the top reasons people love the Flip speakers. The Flip 6 is about the same dimensions as the Flip 5, though a bit more bulbous to accommodate the new internals. This marks another refresh where JBL is making the most portable speaker possible that doesn’t sacrifice volume or quality.

Those new internals are the story of the Flip 6. There are now two passive radiators and a dedicated tweeter alongside the racetrack driver introduced with the Flip 5. It’s great to see more components dedicated to each frequency range packed into a speaker this size and it does make a difference on clarity in lots of songs.

On the battery side you’re getting 12 hours of playback, another win compared to the rest of the compact Bluetooth speaker field.

The Flip 6 can fit into any bag, or you can use its built-in adjustable strap to attach it to anything you can think of. At 1.2 pounds, the speaker feels very dense and solid. Despite its soft mesh exterior there’s no give or creaking here to be found.

If you value compactness, the Flip 6 is the winner.

The buttons are hard plastic and tucked closer to the back of the Flip 6. They’re super easy to feel out and don’t need to be deeply depressed. The power button is also responsive and has a satisfying click but the Flip 6 can take a moment to wake up and connect to your phone.

I loved the Bose SoundLink Flex speaker but if you value compactness, the Flip 6 is the winner here. The Flex can fit into most everyday bags but it dwarfs the Flip 6. For a crowded campout bag, I can see lots of outdoor enthusiasts picking the Flip 6. There are lots of speakers smaller than the Flip 6 that all sound worse, and larger speakers that sound better but may not fit as comfortably into your packed bag.

I was most let down by the Flip 6’s audio. For all the talk about its upgraded internals, mainly in components that aid in the low-end, my impression of the Flip 6 was “this is pretty good.”

Having a tweeter, woofer, and radiators packed into this small of a package is a bit of a double-edged sword. Each of those components does a great job of handling their respective frequency ranges, but it may be too much for a small speaker to properly handle.

For starters, I found the low-end to be lacking. I never got the “wow” effect that the SoundLink gave me during that review. My go-to stress test song for low-end is “Sound & Color” by Alabama Shakes. The intro to that song absolutely hinges on the impact of the low-end and usually sounds best on headphones or a higher-end, larger speaker. The Flip 6 really struggled to handle the bass here, and got noticeably distorted at high volumes.

On the whole, most instruments are still clear but they aren’t very well separated. A great party track, Skylar Spence’s “Can’t You See,” which incorporates tons of drums, synths, horns, and guitars feels compacted together and it’s hard to pick those individual tracks out.

In songs that focus on one particular type of instrument, it’s a bit of a brighter story. Bo Burnham’s “That Funny Feeling” and its guitar track are resonant and bright. Every strum has the emotional resonance that song requires and the low-end does a better job of supporting the mids and highs.

The Flip 6’s biggest weakness other than separation is vocal clarity. On most of the songs I tested vocals were tinny and over-processed. This is regardless of genre. They aren’t bad but in A/B testing with other speakers I own the Flip 6 fell behind. The sound here is just kind of boring on the whole. Had JBL found a way to improve instrument separation I’d be happier here, but that may not be a realistic expectation to have for any small speaker.

Despite mentioning distortion twice, I didn’t find it to be a dealbreaker. It’s in those worst-case scenario songs that absolutely hammer the low-end where you can see the cracks. It’s to be expected in a package this small and overall JBL is doing a great job of dealing with that reality. For best results, I’d keep the speaker around the 80 percent volume mark.

I wouldn’t go as far to say JBL is underdelivering. The price is fair compared to the rest of the market, and being the best of the ultra-portable speakers is a title worth bragging about, but I don’t think the Flip 6 is able to be considered alongside larger speakers anymore. Mid-size speakers have just advanced so much.

JBL isn’t using any tech like Bose’s PositionIQ or Sonos’ Trueplay to dynamically adjust the Flip 6’s output, but the speaker makes up for those shortcomings with two key features.

The first is something that the SoundLink Flex lacks: customizable EQ by way of the JBL app. You get fairly basic adjustments for the three key frequency ranges, but it’s always great to see the option to tweak the sound included.

The second is compatibility with JBL’s PartyBoost feature, which allows up to 100 PartyBoost speakers to sync together at once. This covers JBL’s other speakers like the Charge 5 and Xtreme 3, so if your whole friend group owns JBL products, then you can sync your speakers together during get-togethers as long as everything stays within Bluetooth range.

This isn’t a unique feature in Bluetooth speakers, but JBL’s inclusion of a dedicated button for PartyBoost makes it a breeze to set the feature up. The bigger question is how often will you use PartyBoost? I’d hazard a guess the answer is “not often” unless you want to buy more JBL speakers yourself.

JBL’s been at the top of the market for so long that updates to its speakers can feel like Amazon updating the Kindle line.

The Flip 6 does a lot to improve upon its predecessor thanks to changes under the mesh, but sticking with its tried-and-true design language for too long is starting to hold it back. Speakers like the Sonos Roam and Bose SoundLink Flex show that portable speakers aren’t just getting better audio components packed into their chassis, but are getting smarter at controlling those components as well. Quality hardware is now only part of the equation to make a winning speaker.

If you’re looking for one of the best compact Bluetooth speakers around, JBL’s Flip 6 is still in a league of its own. If you want a great all-rounder, there’s a very crowded market of competitors worth your consideration like the Bose SoundLink Flex, JBL’s own Charge speaker, and the Sonos Roam.