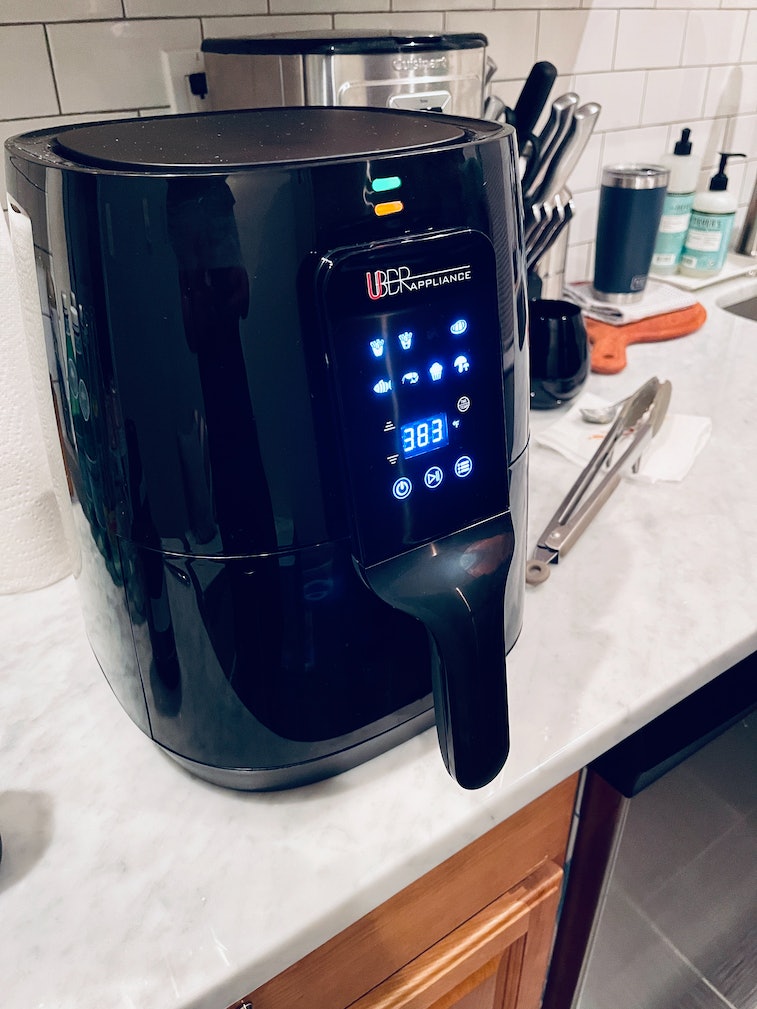 It took one bite out of a piece of chicken for me to believe the hype. After months of considering getting an air fryer, and quietly fighting the urge to give in to a craze that seems to have only grown during the pandemic, I finally let one into my home. And, oh boy, should I have let it happen sooner. Much, much sooner. The device I have in my kitchen, specifically, is the “Air Fryer XL” from a company called Uber Appliance, which is originally priced at $150 but happens to be on sale right now for $100.

It has a 5-quart basket, big enough to fit about two large chicken breasts (more on that later), and a digital display that lets you control time and temperature ranging from 150F to 400F. You also have easy access to eight presets that are intended to help you cook foods like chicken, steak, fries, and wings “to perfection.” That said, I like to tweak the timing and temperature depending on, say, how much chicken I’m actually cooking on any given day. I rarely eat red meat, but I imagine the same thinking could be applied to that, or any other grub you want to air fry.

To be perfectly clear, I wanted the air fryer to cook one thing and one thing only: fried chicken. Not because I don’t like making it the traditional way with a fryer or pan, but because I’ve always struggled to get chicken “just right” — it was never the ideal combination of crispy on the outside and juicy on the inside. Thankfully for me, Uber Appliance’s Air Fryer XL didn’t disappoint and the fried chicken that came out of it has been incredible and mouth-watering so far. I’ve been using it to make fried chicken sandwiches, BBQ chicken, and some good ol’ chicken strips to take me back to my little kid days.

Uber Appliance's Air Fryer XL is easy to use, convenient, and accessible at only $100.

It’s also just extremely convenient. During the cooking process it’s a lot less messy since there’s no oil to splash all over your kitchen and, once you’re done, you can just throw the air frying basket in the dishwasher. Uber Appliance also includes a free book of recipes with its device, which teaches you how to make things like a blooming onion, french toast sticks, and wings, to mention just a few.

The funny thing about the blooming onion recipe is my wife and I tried to give it a go, but it was a complete failure — it didn’t taste good and it definitely didn’t look good. She blamed it on the almond flour, though, and we haven’t revisited that recipe since. Still, as I mentioned earlier, what I wanted most out of an air fryer was a crispy and juicy piece of chicken — and I got exactly that, so what else could I ask for?

Next up on my list, I’m going to try getting funky with it and start trying to air fry new things like wings, rice, those french toast sticks from the recipe book, and perhaps even give that blooming onion another spin. Even if it doesn’t look (or taste) remotely close to the one from Outback Steakhouse (if you know, you know), at least we can say we tried. For now, however, I’m gonna keep air frying some chicken and enjoying every single bite until my body is ready for a different kind of meal.