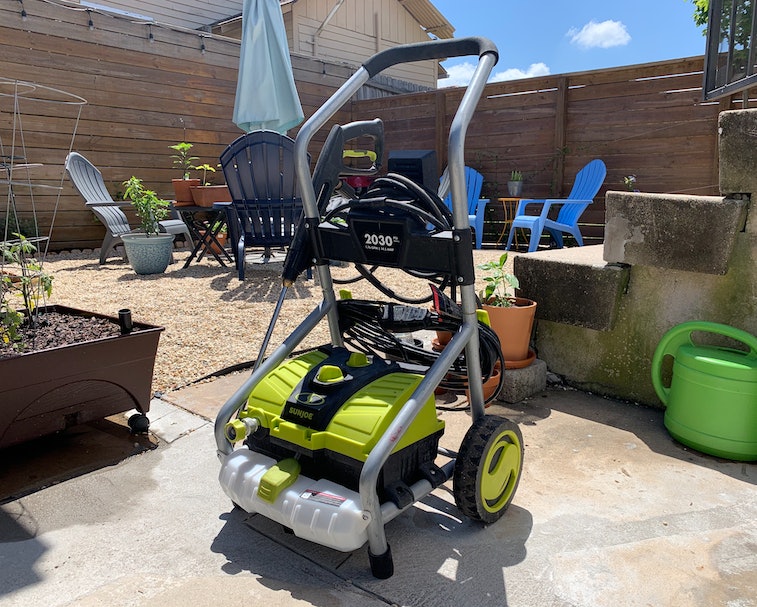 I’m not a homeowner. It’s not that I’m ethically opposed to the American obsession with real estate (although I am), but more that I don’t think I’ll ever be financially stable enough to make that an option. Sometimes being a writer means terrible landlords, broken appliances, and crabby maintenance personnel.

That’s why this weekend I decided to take matters into my own hands, to seize the means of... well, pressure washing. I stood in my sweatpants and Mossy Oak slippers on the front porch pressure washing the front of our house with a Sun Joe 2030 Max like some kind of millennial Hank Hill.

As I said, I’m not a homeowner... but my girlfriend is. She’s damn good at it, too, because unlike me, she’s been a real adult for years. This is the third home she’s bought, actually. Meanwhile, I’ve largely coasted by thanks to a combination of white male mediocrity and some objectively great dimples. But I’m trying to make up for lost time and be a better partner / housemate, which is how I found myself willingly standing outside on the chilly, spring Sunday morning, blasting off New Orleans’ inescapable seasonal buildup of grime, algae, and insect carcasses from her home’s walls.

To do this, we borrowed our friend’s Sun Joe 2030 Max, which is as simple to use as it is a picturesque image of suburban domesticity. The 2030 Max comes with a number of interchangeable nozzles, although for most purposes you only need two of them: the soap dispenser, and the one enabling its widest spray setting. Two dials control the pressure intensity, and apart from the refillable soap reservoir that’s honestly about it. I was surprised to find the cleaning solution did most of the work for me—ten minutes of letting the walls soak broke down most of the outer layers of dirt. From there, it’s just a matter of experimenting until you get the right angle and distance, and then the serotonin kicks in.

To the best of my knowledge, there isn’t a specific psychological term to explain the brain chemistry behind why so many of us find “Oddly Satisfying” videos so... well, you know. Per the New York Times, many believe it might relate to our love of “symmetry, patterns and repetition,” while others argue it could derive from “flow,” or “the state of being completely absorbed in an experience.” Regardless of the reason “Oddly Satisfying” videos and imagery have racked up millions of views, a relaxation time suck only rivaled in popularity by its psychological cousin, ASMR.

Pressure washing is the perfect example of an Oddly Satisfying experience. The clear-cut, expanding lines formed between a surface’s dirty portions and its power washed areas are a joy to behold. The results are also stark and immediate, amplifying that sense of satisfaction while encouraging you to compulsively continue until the job is done. My girlfriend and I agreed to divvy up the work while we set up the Sun Joe 2030, but by the end of the day, we were arguing over who got a chance to use it more.

There are a lot of pressure washer options on the market, but Sun Joe's 2030 Max is one of the best smaller models, and affordable enough to have you blasting the grime off everything in sight.

Pressure washing surfaces, while hypnotic and calming, also keeps you strangely alert and aware. After all, this is a tool that can cause serious damage to whatever you’re trying to clean, not to mention yourself or those around you if you aren’t careful. Unlike cleaning your living room or dusting the bookshelves, using a pressure washer somehow doesn’t feel repetitive or boring. Our borrowed Sun Joe 2030 will unfortunately return to its original owner later this week, but its presence will be sorely missed. Good luck out there, Sun Joe.