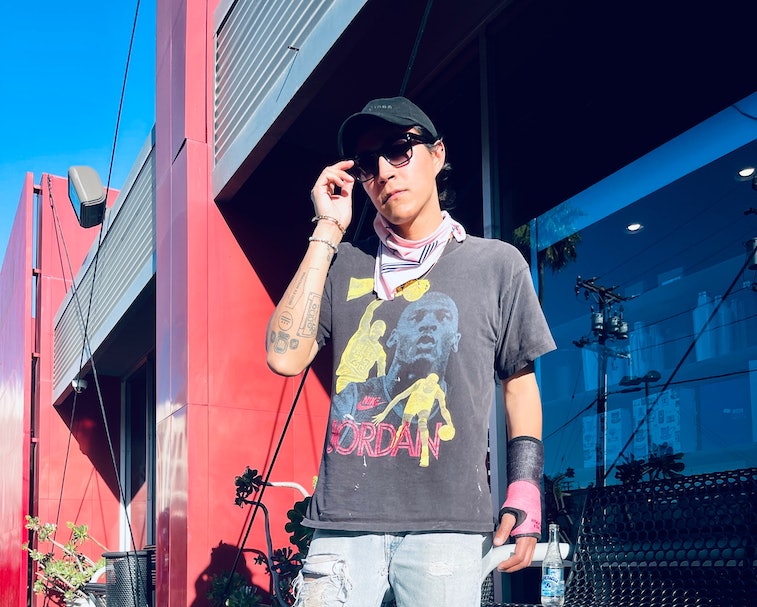 Brad Pitt could wear a trash bag over his body and, somehow, someway, still manage to look attractive. So when I saw pictures of him at the U.S. Open earlier this year, donning a long sleeve polo shirt with a bucket hat and an obscure pair of cool sunglasses, of course, I had to try to mimic his look. Namely, I was interested in his specs, which as it turns out are from an LA-based brand called Hoorsenbuhs. Does it surprise anyone that Brad Pitt isn’t out here wearing a pair we can just get at Sunglass Hut?

If you’ve never heard of Hoorsenbuhs, it’s been around since 2005, and the brand sells everything from ‘70s-inspired jewelry to a $700 beach towel and $2,250 leather duffle bags. The Model V sunglasses that were on Pitt, and now on me, cost a whopping $795. While they won’t turn me into a Brad Pitt clone overnight, I do love the way they look; they pair with basically any outfit, whether it’s basic pants with a button-up shirt and a baseball cap or shorts with a T-shirt and a dad hat.

I mean, for the love of god, Mr. Pitt was rocking them with a goofy white bucket hat, all while he was sitting next to Bradley Cooper watching a tennis match. Cool as it gets.

When Hoorsenbuhs’ Model V sunnies showed up at my doorstep and I took them out of their fancy velvet-like box, the first thing I noticed was the premium design. The arms felt nice and stiff as soon as I put them on; I’ve had $200 pairs of sunglasses that felt cheap as hell. The black pair I got is handmade in Japan, according to Hoorsenbuhs, and features vintage black lenses and a 24K gold trim that gives them a subtle pop. This particular model is made with an “alternative fit for less prominent nose bridges and higher cheekbones,” which basically puts Brad Pitt and I in the same category. (Hey, let me dream, okay?)

Yes, Hoorsenbuhs’ Model V are expensive, but they’re a true example of getting what you pay for. And considering how I think they’re probably going to last me forever, unless I end up losing them after a long night out, they’re worth it to me — good for everyday and special occasions.

What’s funny is that in the latest episode of the HBO hit show Succession, there’s a scene where Kendall Roy (played by Jeremy Strong) is out in Tuscany wearing an amazing pair of sunglasses, and you guessed it, they’re the Model V from Hoorsenbuhs (albeit in the black tortoise temples style). That’s all to say, if you love them as much as I do, don’t let that price tag scare you getting a pair made. Now, if this shape or style isn’t for you, don’t worry, Hoorsenbuhs has plenty more sunglasses to choose from. I know I’m already thinking about my next pair.

A sleek pair of sunglasses that celebrities love.