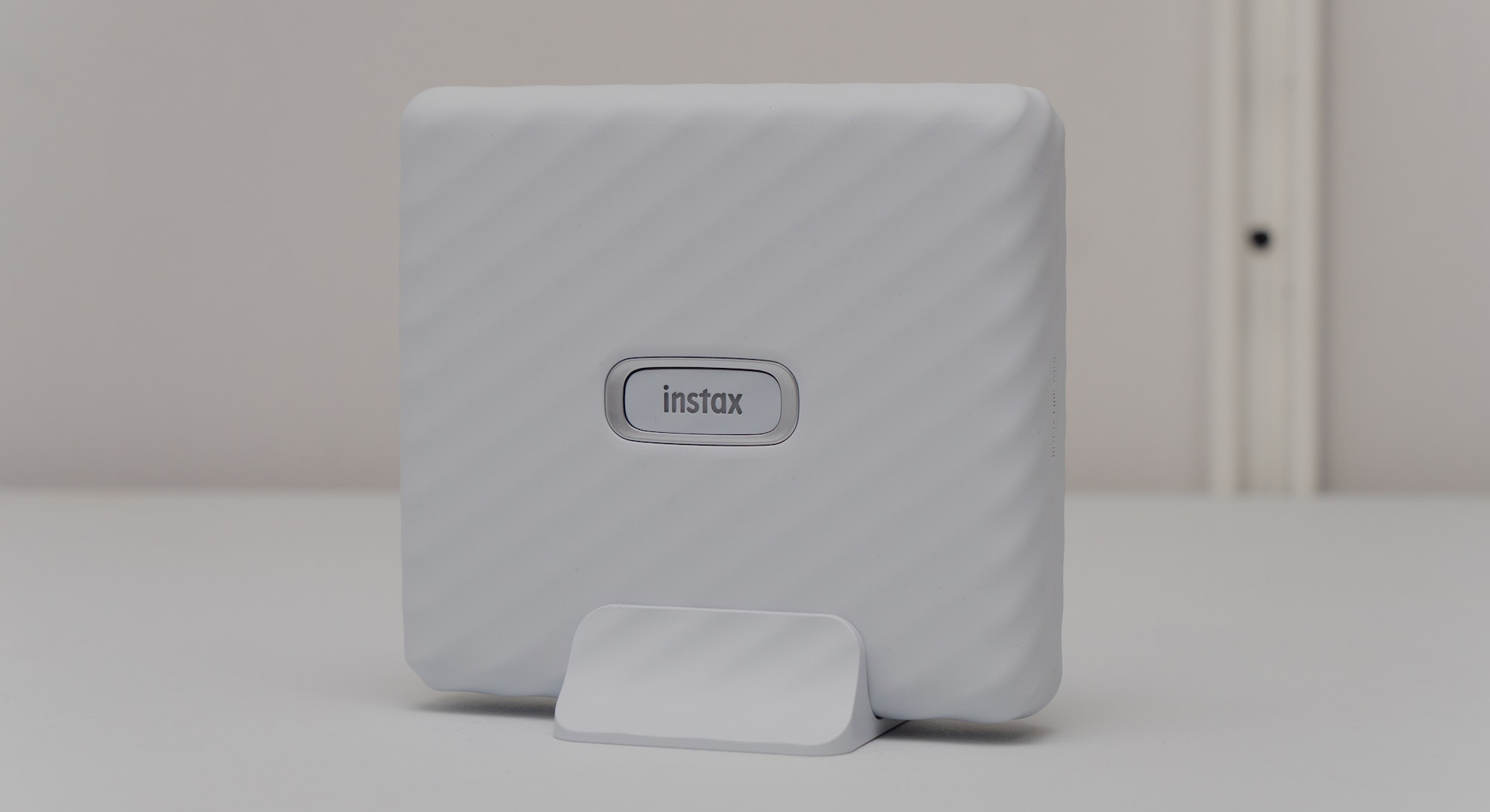 Fujifilm is a company both loved and hated by photographers.

It’s both producing digital cameras loved by photographers (including me) while also discontinuing iconic 35mm film stocks like Pro 400H, which makes me cry. And while 35mm film is totally having a moment right now (see Casey Neistat’s tweet below), I don’t think anyone would argue that negative film is a big, growing business. But that doesn’t mean film is dead, it just means it’s evolving.

If you’ve been to a wedding in the last 10 years, you’ve probably seen one of the cameras shown below. It’s a Fujifilm Instax camera; a pack of instant film goes in, you take a shot, a picture comes out. The camera itself is exactly what it needs to be; relatively cheap, super easy to use, and sturdy enough for events where people need to use it after a few margaritas.

But let’s be real, nobody wants to lug around an Instax camera all the time. Many of us pay a lot of money to have really good cameras in our phones, after all. But physical photographs are just objectively way cooler than digital ones, and this is why Fuji has always had a line of Instax printers, like the Instax SP-3 which prints on Instax Square film and the Instax Mini Link, which prints on the adorably small Instax Mini film as the name suggests.

The newest entry in Fujifilm’s printer lineup is the Instax Link Wide, and this printer is all about going BIG.

An instant printer that links up with your smartphone. Kind of pricey but likely the best on the market.

I love printers, but they’re not the most attractive devices you’ll find in a person’s home. Not so with the Instax Link Wide; its soft corners and subtly tessellated surface are good to look at and to hold.

Just like Instax cameras, there are gloriously few ways to interact with the Instax Link Wide — you can load a film cartridge, unload a film cartridge, charge it the micro-USB port (boo, give us USB-C), and press the big button to turn it on and off. Those are all the things you can do with this printer, and it’s awesome.

One nice touch is the included stand, which allows you to prop up the printer on its side or facing up. I like to have it facing up, so that when you print it pops straight up like a little image toaster. I love that.

What I do not love is Fujifilm’s app for the Instax Link Wide. First of all, Fujifilm’s apps are kind of a chaotic mess; sometimes the company makes an app for a specific product, which is the case for this printer, and sometimes the company has one app that works with multiple devices, like the image syncing app for its cameras. Across all these apps, Fujifilm has a wildly inconsistent visual language and if we’re being honest, the apps are pretty buggy.

For people who want something simple, the Link Wide app is… okay. It helps you connect to the printer, and once you’re connected, the interface is simple and easy-ish to use. I really wish there were more controls for pros, but as it is, it works pretty well.

On the landing screen of the app you’re presented with four options: “Simple Print,” “Editable Template Print,” “Collage Print,” and “Sketch, edit & Print,” and yes that last one is a nightmare of capitalization and punctuation (I’m glad you noticed). Several of these do mostly the same thing; all except the “Simple Print” option allow you to add more elements to your print, like other photos or graphical elements and text.

The process for printing is pretty straightforward: just connect to the printer, either select a photo or make a collage, and print. What is more difficult is getting good prints. Translating what you see on the screen of your phone to a flat sheet of chemical emulsion is a complicated process, and because Fujifilm is targeting regular consumers, the app is set up to hold your hand the entire way.

In the press materials Fujifilm touts a new mode called “Instax-Rich Mode,” which “features extra-vibrant colors,” and this comes enabled by default. At first, I bristled at this choice, but after printing out a number of side-by-side images to compare the two modes, I honestly wouldn’t print in Natural Mode basically ever.

Fuji is doing a lot with this mode in order to help people get prints that look right. And this isn’t easy, because people will print pictures that’ve already been edited for the screen alongside pictures that haven’t been edited at all. In my experience, the way to get truly great prints is to feed the Link Wide app unedited JPEGs. Rich mode will also do its best to restrain your edited images, but in everything I printed, I found it’s better to let Fuji take the wheel from the start.

One thing I did notice in these prints is aliasing and moire. Despite being 800 speed film, Instax Wide is pretty large, so it should have some decent resolution (for film). But in the example below, you can see pretty severe moire, and in the picture of my partner there’s a bit of aliasing in his glasses. This could be low resolution on the part of the printer’s internal screen, or it could be a crummy scaling algorithm happening in the Link Wide app. Either way, it detracts from what would otherwise be gorgeous prints.

At $149.95 without film, this printer is pricey. If you want an Instant Film printer, you actually do have a lot of options between Fuji, Polaroid, Canon, and even Kodak’s offerings. But Fuji is the only company that has a full lineup of time-tested instant cameras, films, and printers, all of which are pretty much in stock everywhere.

This printer is awesome.

I’m disappointed by the aliasing and moire problem, but I have hope that Fujifilm can at least mitigate it with a software update to the Link Wide app. I also think there’s a lot to like with the Link Wide app that doesn’t necessarily appeal to me, like the collage and editing modes, but I did try them and they do work well.

Overall, if you like the look of Instax Wide images, both regular consumers and pros will be happy with this little printer. Sure, you could spend just a bit more and get a good inkjet printer that can do quality prints, but honestly it’s just not the same. You can’t just give out a naked 4 x 6 print to someone, that’s just uncouth. This printer is awesome, and when you see your picture come out of the top like a little toaster, you won’t be thinking about the $150.