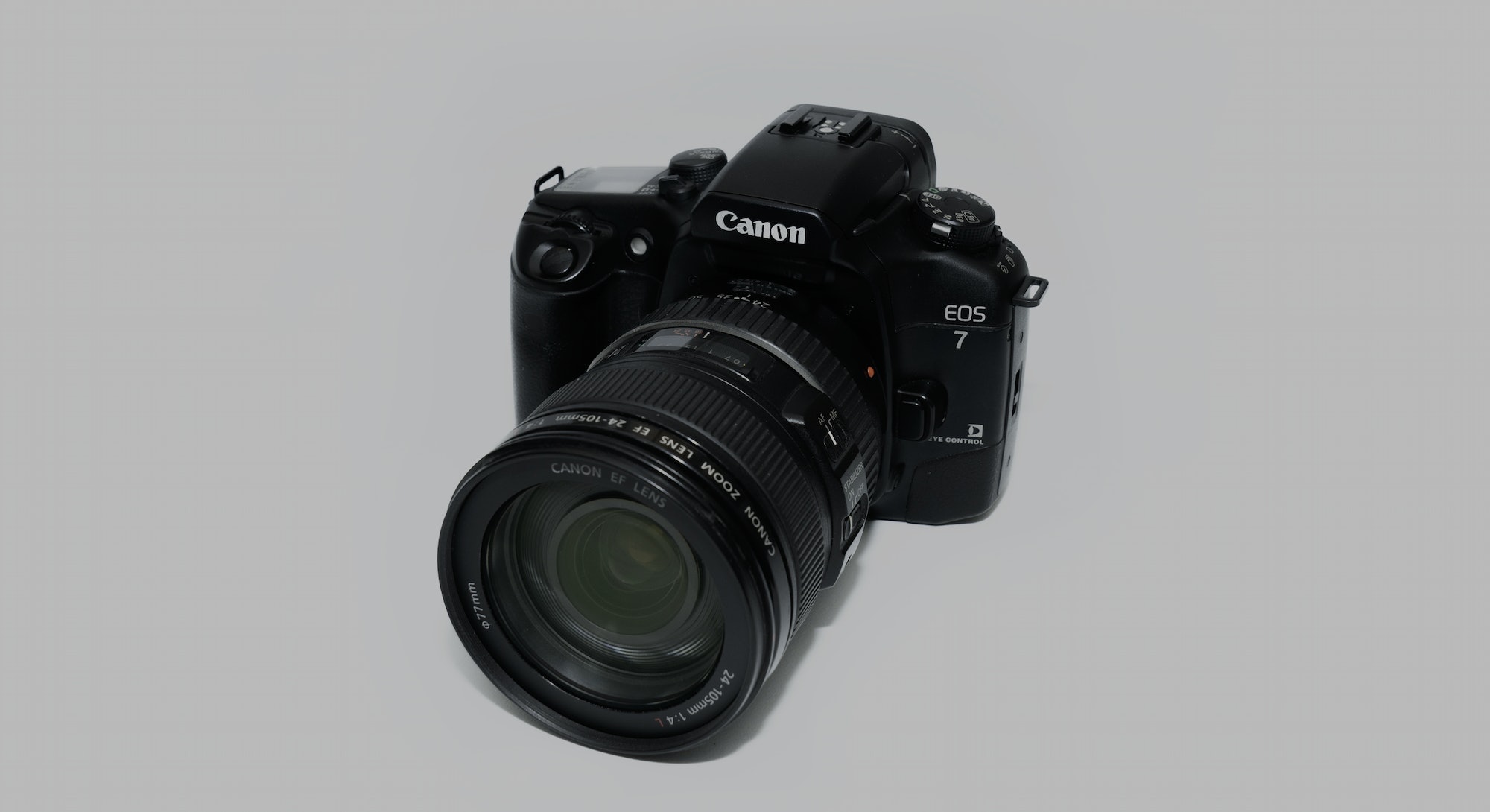 So you’ve decided to get (back) into film.

It is booming right now, after all, and it’s not hard to see why: The images you can get out of film are dreamy, colorful, and nostalgic. But the question is; which 35mm camera should you get?

Here are a few of your options:

For my first foray back into 35mm film photography, I decided to go with an SLR. Now, there are classic manual SLRs, like the always-reliable Canon AE-1 and the Pentax K1000, and then there are modern SLRs, which are electronic and for all intents and purposes operate exactly like modern DSLRs. That’s what I got.

Because I was a weenie and didn’t want to get a bum camera on my first go, I decided to get a Canon EOS 7 in “Excellent” condition from KEH for about $200. This camera, which I compared to the EOS RP here, came out in 2000 and really does feel like any other Canon camera. I was able to start shooting with it almost immediately.

The EOS 7, also called the EOS 30 / 33 or the Elan 7 in some markets, is a thick, bulbous camera. It weighs a little more than 20oz, and it has a nice meaty grip. Though not the absolute top-tier, this is a professional camera, and as such it needs to accommodate professional lenses. This means the EOS has a deep grip that really does help to balance big glass.

The top panel features a very handy LCD and a few knobs and buttons. I’m shooting with some rangefinders these days, and let me tell you, I miss the EOS 7’s little top LCD quite badly. It tells you all your critical exposure information right in one spot, and it’s easy to read in direct sunlight.

When you look through the viewfinder, you’ll notice a few things. First, it’s absolutely huge. I’m still used to Sony’s insultingly small viewfinders on the A6000 series (and the A7C, a criminal cheap-out if you ask me), and the optical viewfinder on the EOS 7 is just amazing. Mine is a little dirty though, and since these cameras are getting pretty old, you should expect some viewfinder funkiness. That said, the viewfinder also includes handy data like your shutter speed, aperture, and EV compensation.

On the backside, there are a bunch of wheels and buttons, and at first glance, it can be a little intimidating. I’m not going to go into what each one does (you should check out this actually very good manual for that), but most of these are what you’ll use to change some of the camera’s options. You’ll be looking at the LCD while you fiddle with these buttons, and that’s pretty much how you do it. It’s not bad, but you can see how the modern touchscreen-joystick combo became the standard.

Over on the left-hand side, we have the mode dial and the drive lever. The modes work exactly the same as they do on modern DSLRs, and if you’re using an autofocus lens, you can just put it in Auto (the green box) or P mode (also basically auto), and just go to town.

Okay, but what about physically loading the film? There’s a little switch you pull on the left-hand side that pops open the film door. Inside you’ll see a very standard looking film bay, but there is a lot of innovation at work here. Unlike earlier film cameras, Canon took away pretty much every point of user error, so there’s nothing you have to slot film into or sprockets you need to align, just lay the film over and you’re pretty much good to go. This is what they paid the big bucks for back in the day.

Lenses and the Canon ecosystem

As noted above, people looking to get into film shooting have a pretty unbelievable number of options. I chose to go with Canon really out of impatience and some limited experience with Canon DSLRs, but I’m glad I did, because there is so much Canon gear on the used market. Let me explain.

For some, $750 will sound like a lot, but there are a couple of things to keep in mind. First, you can get an EOS 7 for about $100 on eBay, I just paid extra to get the KEH guarantee. Second, you can use super cheap EF lenses on the EOS 7, like the Canon AF 28-80mm lens that I got for around $50, plus the adorable 270EXII Speedlight I got for about $60. In decent light, this combo will give you very clean shots, all for just over $200.

You can get really great stuff for not much money.

Because all of Canon’s gear works together, and has been on the market for so long, you can get really great stuff for not much money. Plus, if you have a Canon digital camera, these EF lenses and flashes can be used across both systems, either directly or with an adapter.

One small note: In the digital mirrorless world, one of the best ways to get started on the cheap is to adapt vintage lenses to digital cameras with a physical adapter. This doesn’t really work on the EOS 7. I tried adapted lenses from Pentax and Contax and they both blocked the mirror, which would ruin a film shot had there been film in the camera.

Shooting with the EOS 7

Once you have your film loaded, CR123A batteries installed, and EF lens mounted, you turn the camera on by rotating the mode dial to your intended mode. Then you’ll make sure your settings are good in LCD, put your eye up to the viewfinder, and snap a picture.

The film will advance automatically, and the sound is so retro and fantastic. The little film counter in the LCD will advance by one. It’s all kind of magical.

Autofocus — one of the main reasons to get one of these SLRs from the early 2000s — works really well. Don’t get me wrong, it is slow compared to the latest digital bodies and lenses, but not as slow as you might think. Remember, people used to shoot a ton of weddings on these things, and that’s basically just pure autofocus chaos.

Now let’s talk about metering. In older cameras, through-the-lens (TTL) metering was a big innovation, and it was perfected in modern cameras like the EOS 7. In practice I have nothing to complain about; the vast majority of my shots came out with normal exposure, and the ones that didn’t were just a bit underexposed.

A lot of people like to shoot pro film stocks like Portra 400 and Fuji Pro 400H (RIP) a little bit overexposed. You can actually do this without fiddling with the ISO setting using the exposure compensation function, but you only get two stops up or down. This will be fine for most people, but if you shoot more artistic shots with expired film and heavy overexposure, you’ll have to do it with the ISO.

One thing that might surprise you about the EOS 7 is that the battery life is nuts. According to the manual, you can expect to shoot more than 100 rolls of film before the battery gives in. For all but the heaviest shooters, this will be weeks, if not months of battery life.

One thing is certain: If you get a good condition EOS 7, it’s going to work amazingly. It’ll probably surprise you with how modern and effective it is in almost every dimension. But the question is: What kind of photography do you do?

If you’re shooting product shots like I am, or weddings, or events, or really any commercial photography, the EOS 7 is exactly what you’re looking for, hands-down, no caveats.

But after a few weeks with this beefy SLR, I found myself wanting something smaller. I looked into some of the premium point-and-shoots that everyone loves, like the Olympus Mju II and the Contax T3, but they’ve really exploded in price.