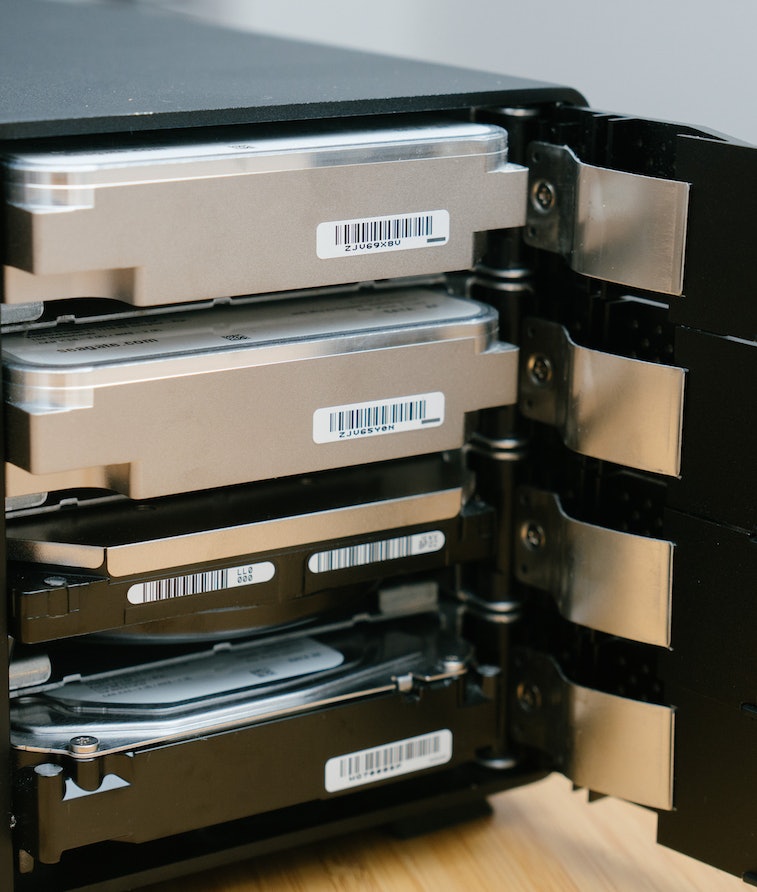 So you're thinking about a NAS.

For whatever reason you've got a lot of files to store and one hard drive isn't going to cut it. Maybe you've got an extensive and definitely legal movie collection, or maybe you're like me and have two decades of pictures at their original quality that won't fit into Apple or Google's expensive cloud storage. No matter what the situation, you need storage, and lots of it.

But is a NAS really the right choice? Sure, you have a lot of data to store, but do you really need medium-speed access to that data from every computer in your house? I bet most people just want a way to combine hard drives, and the path of least resistance at first appears to be one of these extremely expensive boxes like the Synology shown above. That's without drives.

So if you don't really need a NAS, how do you combine drives together? This is where RAID — which stands for Redundant Array of Independent Disks — comes in. RAID is a technology that's been with us since the 80s, and like most low-level technologies, it comes with its pros and cons. The video below does a good job explaining how RAID works.

The thing is, even with redundancy, a RAID array is easy to break. You might need power-user levels of storage for all of your digital goodies, but you shouldn't have to be a system administrator to do it.

Here are some drawbacks of RAID:

There is a better way. What most people need is a multi-bay drive enclosure and a multi-drive software solution. Let's talk about one and then the other.

A multi-bay drive enclosure is simply an external hard drive that holds multiple drives. Unlike a NAS, these enclosures don't have embedded computers within; they simply connect each drive to the host computer. The simplest and most common type of enclosure these days are USB enclosures. Yes, I too miss the days of Firewire, but now it's all USB all the time. Please don't @ me, eSATA people.

Unfortunately, USB isn't the most stable technology for doing heavy data work. What I mean is, both your motherboard and these drive enclosures have their own USB controller chips embedded within each. They may work decently with one another under normal, light use, but blasting multiple drives at the same time with hundreds and hundreds of gigabytes of data will exacerbate any tiny instabilities between chips.

This is a long way of saying: Don't cheap out on the enclosure and the controller within. Get something good.

An attractive, stable drive enclosure. Drives go in like cartridges.

I say this from a place of experience: Cheap Mediasonic enclosures have given me nothing but problems. Several times I have thought my drives were dead to instead find that the enclosure was just too buggy to keep the drives connected. So, if you have your drives setup as a RAID in an enclosure like this, the whole array just continuously connects and disconnects.

The Sabrent enclosure shown above is actually cheaper, far more attractive, and actually works. I have a few 10TB drives in it, and the fact that you don't have to put the drives into trays is divine — you just load them in like cartridges. It's not without its own idiosyncrasies; it's not 100 percent stable on my motherboard's USB-C 3.2 port, but is rock solid with USB 3.0 ports.

Once loaded, the drive enclosures described above will show you each separate drive in your operating system of choice, and now we need a way to combine them together. Here are some options:

On the Mac you can use Disk Utility's built-in "soft RAID" (short for software RAID) functionality to combine drives together, but there's only one redundancy option, and that's RAID 1, which is good but far from ideal. Over the years I've tried to make this setup work and it's always ended in tears, so I don't recommend it. The one upside is that it's free.

Mac users can also opt for SoftRaid, which is a better albeit more expensive option that does effectively the same thing, but with more RAID levels. All of the drawbacks of RAID naturally still apply.

On Windows you have a couple of options. Storage Spaces, a built-in feature of Windows 10, is also a soft- RAID-esque solution. Like the name implies, it allows you to create a "Storage Space" out of multiple drives, but like the Mac option above you will have to format your drives first, which presents problems if you don't have a ton of drives to work with.

I personally found Storage Spaces to be very weird and very buggy. The biggest problem is that write speed is unbelievably slow. Like, 20-30 megabytes per second slow. This was what I tried before I found the solution below and I had to bail because I might not still be alive by the time my pictures transferred.

Finally, the good option. I present to you a small, third party software package that has changed the game for me. It's called StableBit DrivePool, and I picked up this recommendation from the storage wizards over at /r/DataHoarder. My only problem with this software is that I didn't find it sooner.

DrivePool creates a virtual drive on your computer that looks and acts just like any other drive. But behind the scenes, DrivePool is divvying up your files to each of the drives that you include in the pool. This sounds reminiscent of RAID, but DrivePool hasn't actually done anything to your individual drives. Instead it's organizing your files completely invisibly into hidden folders on each drive.

This has many advantages. First, because DrivePool isn't doing anything to your drives, the system is more stable. Windows just sees USB hard drives, and that's great. Nothing funky driver magic going on there.

DrivePool also lets you migrate your data from their original locations into the virtual drive without formatting. So you can add all your drives, copy all the data into the new virtual drive, and DrivePool will just figure it out. Once that's done, you only have to work with your new, big virtual drive.

Now let's talk about data safety and redundancy. You'll remember that RAID breaks all your files into chunks and distributes them across drives. DrivePool doesn't break your files apart, it just distributes them between drives. This means that even in the worst case scenario where a drive files, it won't take the other drives with it. You can always go into the DrivePool hidden folder and pull out full, complete files.

I've saved the best feature for last — customizable redundancy. On RAID systems with redundancy, the entire drive is copied over. This sounds great on paper, but different files have different values. Let me give you an example: On my drive pool, I have one folder that has my entire library of priceless pictures. I would die if I lost them. The pool also has my collection of movies and retro games. I would be kind of sad if I lost them, but I'd be fine. DrivePool's folder-level redundancy options allow me to have multiple backups of my pictures, but only one copy of the movies and games. If I were to keep multiple copies of everything, which is what you'd have to do with RAID, I'd be out of space already. Truly the best of both worlds.

Anyway, let's bring this back to the NAS. Once you have all your crap in your DrivePool, you can share your files with the rest of your network using Windows' build-in file sharing. It's not perfect, and maybe not a snazzy as a NAS, but how much file sharing are you really doing? Did I mention that DrivePool has specific options that speed up file access on shared drives? It's great.

I know there are a lot of you out there who haven't abandoned your laptop yet despite the fact that we're all working from home in a pandemic. I gave up my 13-inch laptop in favor of a powerful (but affordable) desktop with a real keyboard and a big-ass monitor and I cannot recommend it enough.

Seriously, it's fantastic. But if you're a laptop die-hard and don't want a drive enclosure tethering down your machine, I would recommend digging up an old PC and making it into a pseudo-NAS; install it on a shelf or in a closet, attach your drive enclosure and setup DrivePool on that. Of course, now you're going to have to suffer under the slow transfer speeds of your Wi-Fi network, but hey, you wanted network storage. That's on you pal.