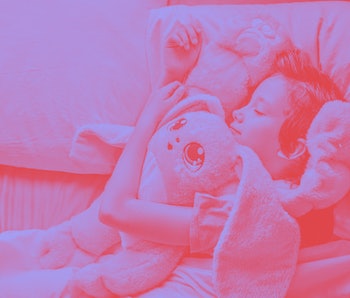 I wish I could say relaxation comes easy to me, but I can't; it doesn't. There is always something to be at least mildly stressed about, according to my brain. If you have anxiety, I'm sure you can relate.

It's an issue that's only compounded by other factors like body pain or headaches or the crushing reality of a never-ending pandemic. When you're holding onto tension or trying to ignore an ache, even laying down isn't as comfortable as it should be. Sometimes, you need a little extra push. Enter: The Mighty Magical Moon Pals.

Moon Pals weighted stuffed animals are designed to soothe, with long arms for hugging and 5 lbs of gentle weight.

A teddy bear that hugs back

While weighted blankets have gotten most of the love in the recently popularized mode of anxiety relief that is weighted accessories, there are other manifestations of this concept that are equally powerful (and less restricting). Among them is the undersung weighted stuffed animal. Weighted stuffed animals, often coming in at around 5 lbs, are best known as a comfort object for children who struggle to calm down or are coping with sensory issues, but they've long come to the aid of adults, too. As research suggests, holding a soft weighted object like a stuffed animal can help a person get better sleep, cut down on restless behaviors, and deal with emotions like stress and grief. Imagine a teddy bear that hugs back ever so slightly.

Moon Pals' design differs from the traditional weighted stuffed animal in that the weight doesn't just sit in one mass at the center of the object like a blob. Instead, each Pal has 16-inch, gangly arms that carry their own portions of the weighted material and a rounded, bottom-heavy body. They are otherworldly cute (a backstory explained in an accompanying picture book) and can simultaneously place gentle weight on your shoulders, chest, and abdomen. How could anyone resist floppy ears and anime-puppy eyes?

Hugs all around — The size and unique weight distribution of the Moon Pals makes them pretty versatile, easily suitable for both children and adults. In fact, if the comments all over Moon Pals' Facebook and Instagram pages are anything to go by, adults are really into these.

After receiving one as a gift from the Input editors last holiday season, I've used it on a near-daily basis. Tense in the upper back and neck? Drape its arms over your shoulders. Bad cramps? Lay down and plop it on your belly. You can even use the enormous ears to cover your eyes and block out the world. And, as an added bonus, I've found my Moon Pal's thickness and firm build makes for a perfect Switch rest when gaming on my back. The only thing that's not to love is the cost ($95, at the moment), though the quality goes a long way toward justifying it. Long-lasting weighted accessories don't tend to come cheap, and this thing feels indestructible.