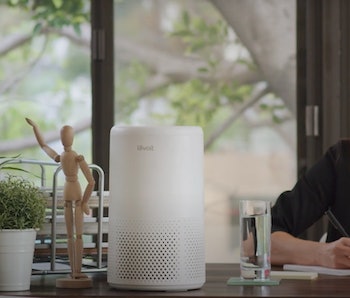 Levoit’s air purifiers came into my life out of necessity, but not for the natural disaster source you might assume. A few years ago, I managed to sublet a room in a Hollywood Hills apartment from an LA Hot Girl™ — complete with tiny dogs and a job you can’t believe is real. How could I afford to live in this expensive part of town with a woman who occasionally found hundreds of dollars in her jeans pockets on laundry day? It was right next to a freeway. No hyperbole, the pool was directly next to the 101, a highway rarely not serving as a smog-churning parking lot.

When I checked out the apartment, she warned me that the proximity to the freeway required hypervigilant dusting. More concerned about breathing that much smog on a regular basis, I immediately sought an air purifier. Casual searching led me to discover warnings about purifiers that release ozone, so naturally, I panicked and did a deep dive. I soon realized many “ozone-free” air purifiers simply release negligible amounts of ozone, the main component of smog, the substance I’m trying to filter. Sufficiently terrified, I set my sights on purifiers that only relied on a high-efficiency particulate air (HEPA) filter.

A small but highly effective HEPA-compliant air purifier that will clean the heck out of your air and look good doing it.

HEPA filters are that girl — The United States Department of Energy defines HEPA filters as those that remove a minimum of 99.97 percent of airborne particles 0.3 micrometers in size. You probably know more about particulates and filters than ever before, courtesy of COVID-19, so you know that’s some serious, N95-could-never filtration. You can also find HEPA-type filters that aren’t always independently tested, but they usually claim to provide slightly less effective filtration of larger particles — totally fine if you’re just looking to filter pet dander.

Armed with information and a tiny budget (I am, sadly, not an LA Hot Girl and have found at most $10 in a pair of damp jeans), my decision was pretty easy. At the time, there just wasn’t a lot of competition in the filter-only space, so I took a chance on newcomer Levoit’s affordable air purifier. Its True HEPA filter was bolstered by a pre-filter and a charcoal filter, and it didn’t look like a space heater from a catalog.

Needless to say, all this research took some time, and I had a month to see what life was like in my digs without clean air. Dust coated surfaces in days and my skin had some strong words for me. Not to sound too much like an infomercial, but the Levoit air purifier really changed my life. I cleaned and sneezed less, my skin forgave me, and soon, I would have a safe space from smoke.

Glowups — Through sheer circumstance, I managed to buy my first purifier in the lull between the 2017 La Tuna Fire and that December’s spate of LA wildfires. Suddenly, this nascent purifier with a suspiciously low amount of reviews had thousands of people raving about it, and it kept selling out. Despite being small, it stood up to smoky air when Californians needed it most. My Levoit evangelism and ozone paranoia hit such a peak that I eventually created a guide to truly ozone-free air purifiers.

More like no-zone — HEPA filters are often combined with other air sanitizing means like ionizers and UV sanitizers. Though they function differently, the ways they manipulate air creates small amounts of ozone. While technically within the safe limit for, you know, breathing, you’re probably going to have your air purifier for many years. There are consequences to long-term exposure to even low levels of ozone, especially for those with respiratory issues.

There are consequences to long-term exposure to even low levels of ozone...

The current EPA standard is set at concentrations of 0.07 parts per million (ppm), but its own review showed studies reporting lung inflammation at 0.06 ppm. For reference, the stricter California Air Resources Board (CARB) only approves purifiers less than 0.05 ppm, so its list of certified models is stacked with mechanical (HEPA only) machines. Some ionizers and UV sanitizers make the list, but personally, a zero is clutch when it comes to ozone emission.

A serious upgrade — After a year and a half with my air purifier, it was one of many things sold when I embarked on several months of travel. I had witnessed Levoit’s expanding range of even better-looking models and figured I would upgrade when I settled back down. Once I did, I kept putting the purchase off until California was newly ablaze. Though I wanted a slightly larger model, I “settled” on the Vista 200 because every other model was completely sold out.

As a smaller machine trying to cover a studio, it doesn’t change over the air as often, but it’s as reliable and effective as my previous purifier. Air pollution headaches vanished along with the stuffy air of a box housing two people. As typical for Levoit, filters are as affordable as they are powerful and last longer than you think. The purifier even tells you when to change the filter with its equivalent of a check engine light.

This version is attractive enough that I don’t mind it being front and center, thanks to some curved edges and a matte finish. The Vista 200 is remarkably quiet on the first fan level, to the point where I once went to turn it on, unaware that my partner had already done so. Even on the highest level, the noise doesn’t distract from conversations or binge-watching.

The interface on the top of the machine is a major improvement in terms of button sensitivity. You can set three different fan speeds as well as an even quieter sleep mode. If you’re ready for bed or just forgetful, you can set shut-off timers for two, four, and eight hours. There’s also an optional warm-toned nightlight that shines upwards, but it can be dimmed for light sleepers. For those who require cave-like darkness to sleep, you can also turn off the backlight for all the buttons.

The Vista 200 has made such a great impression that I’m planning on getting more of them when I move into a bigger apartment. You don’t sacrifice on design, features, safety, or cost. It’s a no-brainer essential for anyone who wants to breathe a little easier.