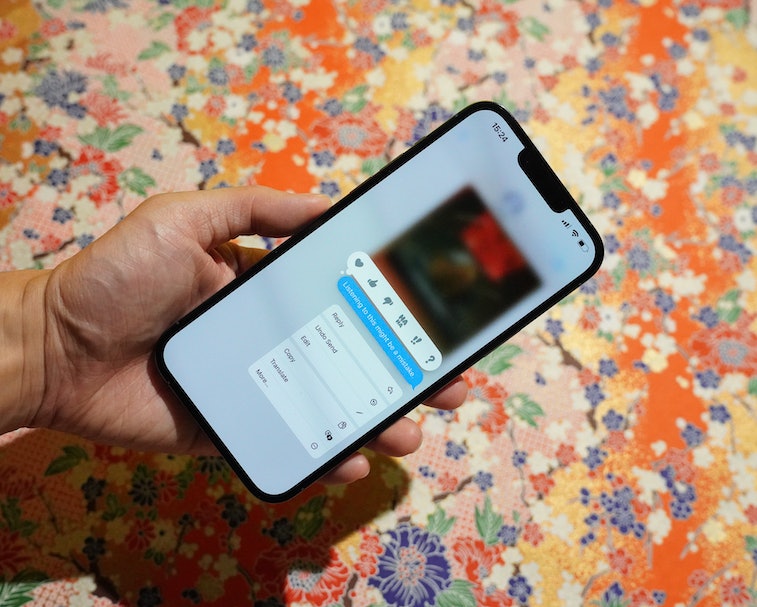 The iPhone's now notoriously poor autocorrect means a typo or three are bound to slip into your iMessages, and sometimes they can be pretty embarrassing. With iOS 16, iMessages can actually be unsent, potentially saving you from embarrassment. And it’s super easy to do.

How is Undo Send different from deleting?

Unsending an iMessage requires an iPhone running iOS 16 (or later) or an iPad with iPadOS 16 (or later) installed. We’re showing you the ropes on an iPhone 13 Pro Max, but it’ll work on any compatible device just fine.

Congrats! You just unsent your iMessage and (hopefully) prevented anyone from seeing it. That’s all there is to it. You’ll see the iMessage disappear in a poof and a line in the chat stating "You unsent a message. [Contact name] may still see your message on devices where the software hasn't been updated. The recipient will see a "[Your name] unsent a message."

A note on timing and availability

Now that you know how to unsend an iMessage, it’s time to take note of a couple of important points. First, you can only unsend an iMessage for up to two minutes after it was sent. After that, you’re out of luck and the iMessage isn’t going anywhere.

Unsending a sent iMessage also requires that both sender and recipient be using iOS 16 or later, too. The iMessage will remain in the chat for recipients using iOS 15, iPadOS 15, macOS Monterey, or earlier software versions.

It's a slight annoyance, but it'll become less of a problem as more people update their devices. It's definitely something to keep in mind for now (especially during the developer and public beta periods). If you're adamant about using Undo Send for iMessages, you should encourage your friends and family to update to the latest versions of Apple’s software sooner rather than later.

Don’t want to unsend the iMessage? You can edit it instead, but the recipient will see an "Edited" label under messages that have been revised and each version will be available for review by tapping it. Also, each message can only be edited up to five times. If you want to cover your tracks, unsending the iMessage is the best option.