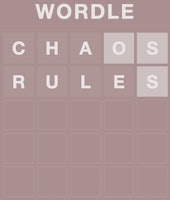 The number of days' worth of Wordle currently available for free.

Wordle, as we are sure you have already heard, has been devoured by The New York Times . And while the massively popular — if occasionally divisive — word logic game is still available to play in its original, unmarred form for now, it’s only a matter of time before the standalone site is shuttered in favor of its inevitable, unholy merger with Paper of Record’s word games section. After that: the dreaded paywall, most likely.

But hope remains! In fact, thanks to an extremely helpful heads up from Motherboard, Wordle fans can easily download the original source code along with its over 2,000-answer lexicon — entirely for free. Broken down to a word a day, that’s over 7 years of pure puzzling goodness, free of capitalist behemoths and classist paywalls.

Read on, beloved reader, for deliverance.

Easy as A-B-C — Porting the original Wordle to your computer only takes three quick steps:

Just don’t let that power go to your head — We’re passing along this information in good faith, mind you. This is merely to stick-it-to-the-corporations-that-be hack and meant to keep Wordle’s fun and free spirit alive in everyones’ hearts and minds (hmm... “minds” might be a good first guess tomorrow, now that we think about it). Please don’t be like this person, who downloaded the Wordle lexicon and then created a bot that spoils the next day’s word for anyone who happens to see it. We’re trusting you on this one, okay?

The legacy lives on — Even with the original Wordle heading to the New York Times in the near future, the simple rules and interface combined with the source code’s availability ensures there’ll be plenty of Wordle variations coming our way. And not just knockoff clones, either; take Queerdle, for instance. It’s Wordle, but, y’know, queer. Get it?