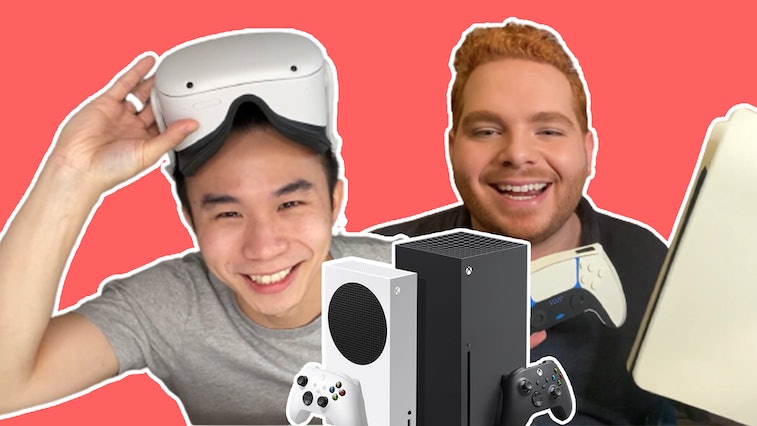 At last, a new generation of consoles is here. Sony’s PlayStation 5 and Microsoft’s Xbox Series X usher in the next era of console gaming with teraflops and teraflops (so many teraflops!) of CPU and GPU power, more realistic graphics with ray tracing, and clearer 4K resolution with higher frame rates.

For early adopters, it’s an exciting time! There’s nothing quite like a good old-fashioned console war. But you don’t need to buy either new console to enjoy a great gaming experience this holiday season. Whether it’s VR, retro gaming, or a DIY route, we’ve picked out a couple of the best alternatives.

So holiday shoppers, let’s jump (pun) into some gaming!

The most powerful Xbox of all time is finally here, complete with ultra fast loading, robust backwards compatibility, ray tracing, and access to Game Pass.

Designed by Microsoft, the Xbox Series X is an absolute gaming beast. The next-gen console features an insane NVMe SSD to cut loading times, ray tracing capabilities that accurately recreate the appearance of real light, and 4K and 8K resolution gaming. Paired with Game Pass, Microsoft's wildly popular game subscription service, the Xbox offers players brand new AAA game releases at just $15 per month (or free if you purchase your console on a financing plan). If you play more than one new game a month, that price point could conceivably save you thousands of dollars a year in games. And, if you're really price conscious, Microsoft is also offering its Series S console, which is built sans optical drive, displays a slightly lower resolution, and comes with half the total storage — but remains an absolute steal at only $299.

The biggest player in console gaming is back with its latest creation, the PlayStation 5. The console features ray tracing, ultra fast loading times, and a pretty advanced controller.

The follow up to Sony's wildly successful PS4 is finally dropping this holiday season. The PlayStation 5 ties with the Xbox Series X for the most expensive console on the market — but you'll see every dollar on screen thanks to its ray-tracing capabilities, ultra fast custom SSD, and 4K and 8K resolution gaming. For those looking to shave a few bucks off the price, Sony is also offering an "All Digital" edition of the console for $100 less than eschews the optical disc drive. The new console comes packed with the DualSense, Sony's most advanced controller ever, featuring haptic triggers which adapt to what you're doing on screen. Though it features Spider-Man: Miles Morales and each unit comes packed in with a copy of the adorable Astro's Playroom, the PlayStation 5's launch lineup is still a bit thin — but Sony plans to offer a slew of exclusive games in the year ahead. Until then, the PS5 offers over 99 percent compatibility with PS4 games.

What the Nintendo Switch lacks in power and resolution — there’s no ray tracing or 4K or high frame rates — it makes up with wholesome single-player and multiplayer fun. Whether it’s Super Mario Odyssey or Animal Crossing: New Horizons, there’s no other game system to play Nintendo exclusives. Not to mention, the Switch is home to tons of killer indie games like Hades and Untitled Goose Game.

The Super Nintendo Entertainment System is reborn with all the modern bells and whistles you could dream of, thanks to FPGA technology and the genius designers over at Analogue.

For the retro gaming crowd, the Analogue Super NT is like a luxury classic car. Built using FPGA hardware emulation, the Super NT perfectly recreates the experience of playing Nintendo's original Super Nintendo Entertainment System, complete with dusty cartridges and real controllers. The Super NT displays classic games in full HD, is compatible with every cartridge ever released for the SNES, and comes with more features to customize your game's visual and audio than we could accurately list here. There's also a thriving hacking scene for the unit (but you didn't hear that from us), making it a dream gift for the nerdy retro tinkerer on your list.

This itty, bitty recreation of the ultimate '90s game console packs quite a punch thanks to a slew of Sega's masterpiece titles and support for modern HDMI televisions.

The Sega Genesis Mini (or Mega Drive Mini if you're outside the U.S.) is a dream come true for '90s kids (and '90s kids at heart) everywhere. Jam-packed with 42 of Sega's best games, like Sonic the Hedgehog 2, Castlevania: Bloodlines, and Street Fighter II: Champion Edition, there's a classic title for every taste. Each unit looks exactly how you remember your original Sega Genesis (except HDMI compatible this time) and comes complete with two near-perfect duplicate controllers — perfect for long multiplayer sessions on the couch before dinnertime. Designed in collaboration with the emulation wizards at M2, this is the best Sega Genesis experience you can get at this affordable price.

Facebook's take on virtual reality is both the most advanced and the most affordable. While compatible with traditional PC VR games, the Quest 2 is also a standalone console with inside-out tracking and controller-free games.

The second-generation Oculus Quest is the best way to experience immersive VR without the need for a beefy gaming PC, cluttered sensors, and wires dangling everywhere. Everything you need to start playing hit games like Beat Saber and Super Hot is included in the box and room-scale VR takes only a few minutes to set up. Starting at $299, you literally can’t go wrong with this gaming experience unless you vehemently hate Facebook (because you need a Facebook account to get started).

The greatest home console of all time is back — and now made entirely of LEGOs.

Since you’re probably spending more time at home or with your family this holiday season, why not build something fun together? While piecing together the Lego NES is literally piles of fun on its own, you can take things to the next level and mod the brick set with a small flat screen and an NES Classic and bring Nintendo’s 8-bit classics like Super Mario Bros. and Metroid to life. Lucky for you, we’ve done the hard work and have a step-by-step guide to help you build your own.