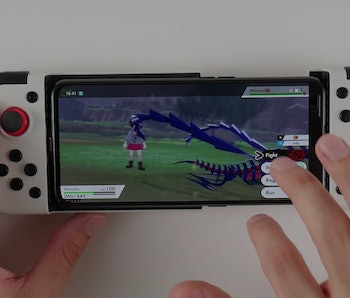 Close, but not quite — Now, granted, there are a few caveats to this app, known as Egg NS: first, the games are a bit buggy and prone to crashing. Oh, and to enable the app, you’ll need to cop a Gamesir X2 controller, which is one of those smartphone game controllers (many of which are actually pretty dope). You’re also gonna need to invest in a top-of-the-line Android phone powered by a Snapdragon 865 (the video uses a Realme X50 Pro 5G), which prices it well above what you would shell out for just, y’know, buying a regular Nintendo Switch or Switch Lite.

But, as the video notes, there’s always room for improvement, so games will most likely start running more smoothly in the near future. Also, that aforementioned, cutting edge Snapdragon 865 won’t stay cutting edge for long, so phones that could handle something like a Switch game will only get cheaper and more accessible as time goes on.

Looking at the big picture for gaming — The video reminds us just how powerful our smartphones are becoming and how quickly this kind of tech is spreading throughout the market. In just a couple weeks Microsoft will launch its xCloud video game streaming service for Android devices. That said, ever since iOS14 debuted, we’ve found it harder and harder to justify sticking with Android. Until then, we’ll probably just stick with our earthquake-detecting phones in one pocket, and our Nintendo Switch bulging out the other.

Now, if there was only a way to throw a phone into a Nintendo Switch, then we’d really be talking...