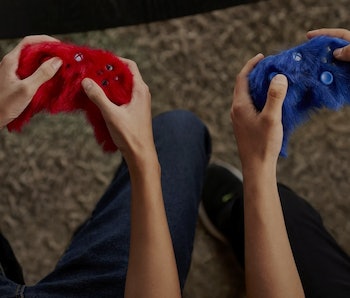 Two years after the release of the highly memeable live-action Sonic the Hedgehog movie, the franchise is getting a sequel. To promote the new installment, Paramount Pictures has partnered with Microsoft to release an obvious hardware tie-in: a pair of eye-popping, sweat-inducing, shag-covered, controllers for the Xbox Series S.

In a blog post from this morning, Microsoft introduced the controllers and other themed-gear as part of a limited sweepstakes to hype Sonic the Hedgehog 2. To have a shot at getting your hands on what look like Jeremy Scott slippers, you will have to retweet Xbox’s Twitter announcement while including the hashtag #XboxSonic2Sweepstakes. Entrants must be following @xbox as well and to be eligible, need to have their profiles set to public.

The winner will receive both the custom Series S console, an additional controller with Sonic 2 artwork, and a pair of custom-designed wireless Xbox Controllers with “Sonic Blue” and “Knuckles Red” artwork. The estimated value of the winning bundle is about $358.

High-fashion— While the console is fairly innocuous, the true gem in this giveaway is obviously the pair of fuzzy wireless controllers. What kind of material was used? How exactly did this design come about? Again, I’ll continue to drive this point home — was Jeremy Scott involved with the mock-up sketches?

Despite my own hesitation to participate in anything resembling a sweepstakes, this particular contest might have to be an exception. The only concern here is whether or not the texture would make for a perpetually sweaty experience when it comes to a long gaming session. Regardless, the product here is admirable even if these controllers are as ugly as they are mesmerizing.

Sonic the Hedgehog 2 will be in theaters this April. It’ll have to hold the fandom over considering the next game in the series, Sonic Frontiers, was delayed until the end of this year.