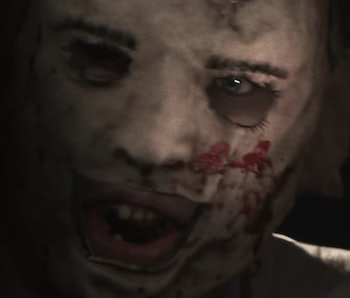 Asymmetrical horror games have become extremely popular over the last few years, and it’s pretty easy to see why — a lot of people love to be scared, and a handful of people like to engage in murder fantasies involving their friends. One of the most enjoyed in the subgenre has been Gun Interactive’s Friday the 13th: The Game, which bagged the iconic IP for fans and provided a great, well-balanced approach for countless rounds of morbid, bloody hide-and-seek.

Last week during The Gaming Awards, the Gun team revealed its next spin on a classic horror franchise: The Texas Chain Saw Massacre. That’s right, slap on your best skin masks, folks, ‘cause it’s gonna get real gory over here.

“A game based on true events.” Cute. Real cute. Although no release window has been provided yet, The Texas Chain Saw Massacre multiplayer game is slated to rip its way onto Xbox Series X/S, PlayStation 5, and PC soon.

The first licensed franchise game since 1983 — Although Leatherface has shown up in the past as DLC for games like Gun Interactive’s Dead By Daylight, as well as Mortal Kombat (no, really), this is the first direct game tie-in since 1983’s little-known release for the Atari 2600. If you think a notoriously controversial horror grindhouse film getting its own video game circa the early ‘80s was controversial... well, you aren’t wrong.

Apparently, the original Texas Chain Saw 8-bit game was a huge flop at the time, seeing as how parents weren’t entirely keen on their children inhabiting the body of a cannibalistic serial killer. Also, to be fair, we can’t imagine the game was actually any good, either.

Taking this moment for a horror PSA — Now that we have your attention, we’d also like to take this moment to remind readers that Tobe Hooper’s 1986 sequel to his original grindhouse classic, The Texas Chainsaw Massacre Part 2, is a genius piece of black comedy-horror cinema, and well worth a watch. It’s got Dennis Hopper wandering a bunch of tunnels underneath an abandoned amusement park wielding dual chainsaws and tossing dynamite.

It rules, is what we’re trying to say. If anyone has a direct line to Gun Interactive, please relay that we’d love a Chop-Top and/or Stretch DLC for their upcoming game.