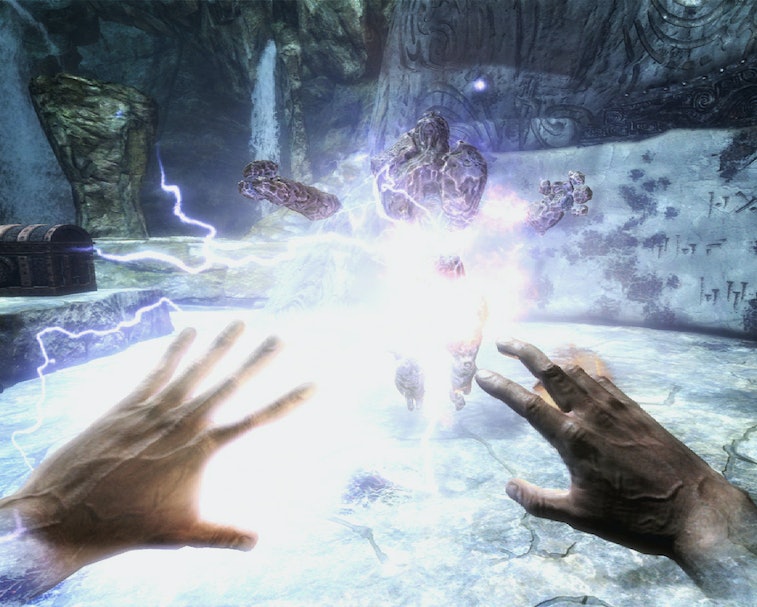 Sure, Elon Musk has a monkey playing Pong using his prototype brain-computer interface, but what if we told you someone else had already figured out how to use one to play Skyrim? Well, that’s exactly what a modder by the name of Cangar has managed. The results are — dare we say it — magical.

Cangar’s mod doesn’t require any sort of direct brain implants, either. He rigged up a Muse meditation headband — which monitors brain activity, heart rate, and breathing — to analyze when a player is most focused on the task at hand. The more focused you are, the more powerful your magic becomes.

“Kind of like meditation,” Cangar explains, “you really need to be able to focus your own mind.”

Cangar (who is a neuroscientist by day) shows off the mod in The Elder Scrolls V: Skyrim VR on his YouTube channel. Increased focus levels correspond directly to a blue magic meter on the character’s wrist — which is also your wrist, because this is virtual reality, after all — and your magic does more damage as the bar fills up.

Okay, so it’s not perfect yet — Cangar’s mod removes Skyrim’s built-in magic-replenishing tools, so the only possible way to charge up your magic is through focus. Average brain activity will give you about half a bar’s worth of magic potential; focusing as intensely as you can doubles the damage done by your spells. The blue bar is difficult to see if you’re not looking at your wrist, so a spinning circle on your hand also increases in size as you focus.

It’s a little unclear, from this video, what exactly Cangar’s mod considers “focus.” Seeing as the only input is this Muse device, it’s likely similar to going into a meditative state — which could be difficult while you’re in the middle of battle. The version demonstrated in the video is, as Cangar says, a “very, very early alpha version.” He has plans to collect data and improve the algorithms he created for the mod.

Your move, Elon — The impact of brain-computer interfaces could span far beyond gaming. The FDA has already approved human trials for the treatment of paralysis and similar conditions, though ultimately these projects often have lofty goals like uploading your entire consciousness to the cloud. Real sci-fi stuff.

These projects require much more invasive procedures than simply putting an extra device beneath your VR headset. Musk’s Neuralink requires an implant that connects directly to your brain, for example. Mainstream adoption of that sort of brain-computer interface is very far off.

In the meantime, gaming is a great place to test the limits of how we can connect our minds to real-world activities. Valve is reportedly developing brain-computer interfaces of its own, though it’s unclear how far those experiments have progressed.