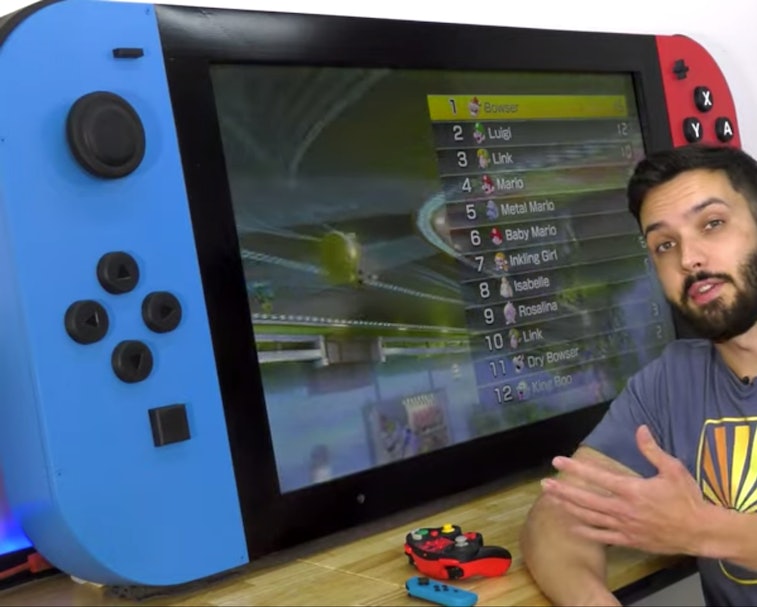 Nintendo’s Switch has spent the last few years enjoying immense market success, even in the face of stiff competition from Sony and Microsoft. The console is home to Nintendo’s enormous lineup of exclusive games, all of which you can play on the go, thanks to the console’s handheld mode.

Now what if, instead of fitting neatly between your palms, the Switch was nearly 6 feet long? That would certainly eliminate the need for a flatscreen television in the equation — but it would also remove any sense of portability, right?

YouTuber Michael Pick set out with this mission in mind: build the largest Nintendo Switch the world’s ever seen. Thanks to some handy craftsmanship — and a lot of plywood and paint — Pick ended his project with success. There’s now a massive Nintendo Switch out there, measuring in at 30 inches high by 70 inches long.

“I really like the Nintendo Switch; it’s small, it’s portable, but it’s really easy to lose, and for me that was a problem,” Pick says. “So I decided to fix that by making something that was a little bit larger and just a little bit harder to lose.”

And this isn’t just a prop. You can actually play games on Pick’s Switch — if your arms are long enough to manage the controls, that is.

Here’s how he did it — Pick’s final construction process, which he outlines in his video, is actually pretty simple. The Uber-Switch’s housing is made almost entirely of plywood, while Pick used a 3D printer to create the triggers and buttons (all of which are fully operational, by the way). The screen is essentially just a large flatscreen.

The inside of the device is more complex. Pick mounted a Joycon controller inside each side of the device, with a manually wired connection between each button and its larger counterpart. A microcontroller takes the input from each massive button and converts it to signals the Switch can decipher. The joysticks — which were also 3D printed and painted — are centered over the actual joysticks using interlocking rubber bands.

Taking Mario to new heights — All that complicated wiring was worth it. Against all common sense, Pick’s Switch is fully operational. In his video, you can watch as he leverages his entire body to play Fortnite and Mario Kart 8, two of the console’s most popular games.

If you’re thinking what I’m thinking — that video games are difficult enough without having to slap your limbs around in every direction just to hit the triggers — you can easily pair another set of Joycons for easier playing.

Pick has donated the finished Switch to St. Jude’s Children’s Hospital. He’s hopeful that he’ll be able to create even more operational console experiments in the near future. Maybe we’ll even see a larger-than-life 4K Switch before the year’s out.