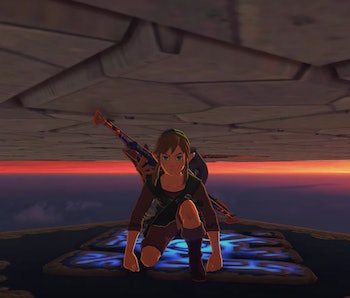 Expert modder Waikuteru has created a masterpiece the proportions of which could only be made possible through two of Nintendo’s most-loved franchises. Waikuteru, a YouTuber who focuses mostly on Breath of the Wild modifications, released this magnificent amalgamation at the end of 2020 — and, if you ask us, it hasn’t racked up nearly enough attention yet.

Waikuteru’s mod will look somewhat familiar to anyone who’s played 2017’s The Legend of Zelda: Breath of the Wild, as it borrows both the game’s graphic stylings and its fighting mechanisms. This isn’t your average shrine, though: in it, you’ll face baddies from another beloved Nintendo game, Super Mario 64.

Waikuteru made the ingenious move of bringing Whomp’s Fortress, one of the most iconic parts of Super Mario 64 to the Zelda universe. It’s an uncanny experience, to be sure, but one we relish for that very reason.

Whomp whomp whomp — This isn’t your average mod; it’s evident, just from this trailer, that Waikuteru has put significant effort into this mash-up. It’s difficult to say whether this is more Zelda or more Mario — it’s very much a Super Mario 64 stage, down to the shape of the platform, but it feels very much like Breath of the Wild because of the graphics and mechanics.

Then there’s the music, which is so perfectly Mario it’ll bowl you over into a pit of nostalgia (but in a good way, we promise). And you do unlock shiny stars after completing the level’s tasks, which is about as Super Mario 64 as you can get.

Nintendo forever — This mod is a strange mash-up, yes, but it’s one that ultimately works well because of its source material. While other video game companies work tirelessly to create fresh franchises for their consoles, Nintendo instead chooses to stoke the flames of nostalgia, creating updated entries for classic series.

Hedging its bets on nostalgia has worked out extremely well for Nintendo through to modern gaming — enough so that the company is opening a nostalgia-fueled theme park. So it’s no surprise at all that this Zelda / Mario mash-up somehow works. Or that Nintendo is still outselling its competitors, next-gen consoles be damned.

If there’s any bad news here, it’s that only those playing Breath of the Wild on a PC emulator will be able to download Waikuteru’s mod. For those with enough technical know-how to do that, you can download the mod from Waikuteru’s Patreon. Plus, it probably won't take long for the notoriously litigious Nintendo to try and shut it down. You may want to move fast on this one.