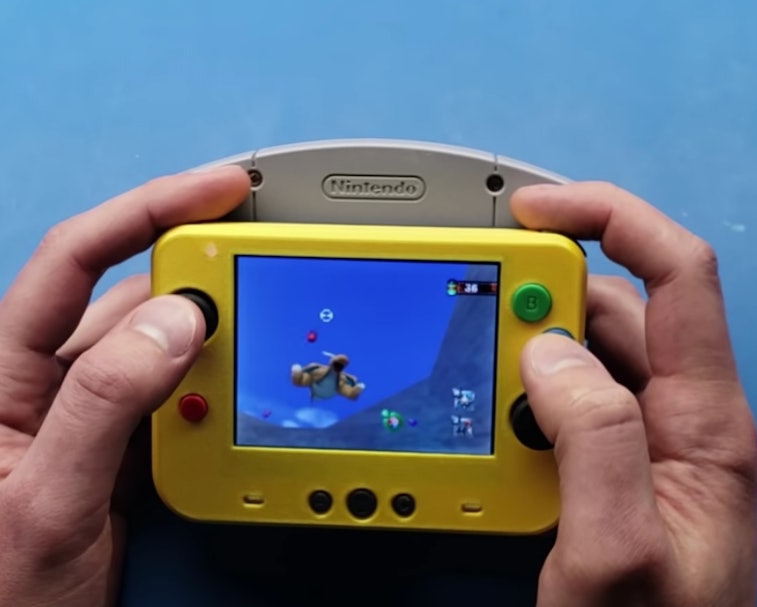 We love modified retro gaming devices here at Input. So we're delighted someone asked the question we've long pondered, "What if you could take your favorite Nintendo N64 games on the go, and running on original hardware no less?" YouTuber GmanModz successfully pulled it off with the "world's smallest N64 portable" that's almost the size of a classic game cartridge.

Next-level soldering — There exist plenty of emulators out there that will allow you to play N64 games on an Android device, but GmanModz's handheld was made by trimming down the guts of an actual '90s console and stuffing it all into a smaller package. He brought in only a few necessary parts like a battery, 3.5-inch screen, a speaker, and a new slot with a "grippy connector" that locks the cartridge in place during gameplay.

Unfortunately, the battery only lasts about an hour and a half, and the handheld doesn't look terribly comfortable either. But hey, you can play all your original cartridges right on it, which is impressive.

You're old, bud — The whole project just puts into perspective how the tech we used to consider "state of the art" is now obsolete, and often less powerful than what's today sitting in some much smaller gadgets like a smartwatch.

The N64's circuitry just needed to be packed a little more tightly (GmanModz used "heat resistant plastic" that won't melt as the internals gets warm) and, thanks to advancements in battery and screen technology, it can now be liberated from the living room.

Instead of tearing apart an N64 controller, GmanModz instead used a pair of custom buttons and Switch Joy-Con joysticks, because they have a smaller footprint. We pray they don't drift.