The world's most expensive video game costs more than a Porsche 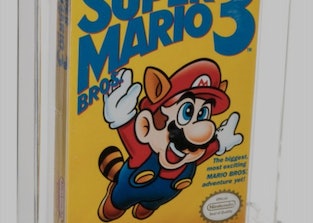 How much a sealed copy of Super Mario Bros. 3 recently went for at auction.

Resale prices for PlayStation 5 and Xbox Series X consoles may be through the roof right now, but they apparently don't hold a candle to 32-year-old titles, as evidenced by a recent auction session. Last week, 20 bidders fought over a Nintendo cartridge from a starting price of $62,500 to over double that value, shattering a world record in the process.

Super Mario Bros. 3 gets the high score — Recently, an ultra-rare, sealed variant edition of Nintendo's iconic Super Mario Bros. 3 sold at auction for $156,000, making it officially the most valuable video game in the world. The sum beats out the previous record holder (perhaps unsurprisingly, a sealed copy of the original Super Mario Bros. from 1985), which went for $114,000 back in July. Just for context, you can grab a 911 Carrera 4S for just $122,400, or even an entry-level 2021 Aston Martin Vantage for the low, low price of $146,000.

Variants vary the price — What makes this particular copy of Super Mario Bros. 3 so valuable, apart from its near-mint condition, is the rareness of the its variant cover art. "Exceedingly rare are sealed copies with the word 'Bros.' formatted to the left, covering one of Mario's signature white gloves," explains Heritage Auctions' press release. "Collectors have spent years looking for such a version — the earliest in the Super Mario Bros. 3 production history – and usually come up empty-handed."

"We couldn't be more pleased about breaking the world record for the second time in the same year," said Valarie McLeckie, Heritage Auctions' Director of Video Games. "That said, it's no surprise that another Mario game, which so many of us grew up with, would set the new bar." And yet, despite the rarity, another, slightly less-perfect copy of the classic console game went for only $38,400 back in July, as well. That's market economics for you, kids.

Excessive wealth, I choose you — The record-breaking auction wasn't the only near-unimaginably priced video game up for grabs that day, either; a near-perfect, original copy of Pokémon's "Red Edition" from 1998 also sold for a stunning $84,000, ranking it the priciest Pokémon ever, as well. Both are additional entries for a year of ridiculous auction sales, from Michael Jordan's 1996 S600 Benz to a pair of unreleased Drake sneakers from 2017.