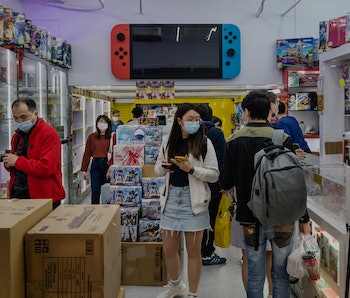 We may finally have some idea how Nintendo is planning to boost its next-gen Switch console’s graphical performance: a specialized Nvidia system-on-chip. That custom chip will include support for Deep Learning Super Sampling (DLSS), according to a new Bloomberg report.

The report builds upon another from earlier this month that claimed the updated Switch will include a larger, Samsung-made OLED display for playing in handheld mode. Neither the new screen nor the custom system-on-chip has been mentioned by Nintendo (or any of the companies involved in production) yet. But rumors of what’s commonly being referred to as the “Switch Pro” persist despite this lack of acknowledgment. Those whispers first started up in August 2020 and haven’t let up since.

Some, like Input’s own Ray Wong, have gone on record explaining why a Switch console with updated graphics makes no sense for Nintendo’s business strategy. But the Switch is more than four years old, and competition in the gaming world is stiffer than ever. A custom graphics chip could be just the push Nintendo needs to keep up its record sales into 2022 and beyond.

Surprisingly next-gen — The inclusion of a DLSS-capable chip in the Switch Pro would be a shrewd decision on Nintendo’s part. DLSS has been around for a couple of years now, but it’s still relatively new to the graphical world.

The technology uses deep learning to essentially recreate graphics at a higher quality as you play. In essence, you can display a low-res game at a higher output without much power behind it. This is perfect for the Switch — on paper, at least — because, as we all know, the Switch isn’t exactly a powerhouse.

Nintendo isn’t exactly known for its graphical prowess, so the use of a custom DLSS chip is uncharacteristically forward-thinking for the company. However, games need extra code to use DLSS support, which means it’ll mostly be used for future titles. Breath of the Wild with ray-tracing probably isn’t in our future.

Expect it (relatively) soon — Besides console specs, the main source of speculation around the next-gen Switch is when Nintendo will actually release it. Bloomberg’s last report stated that Samsung has plans to begin production of handheld displays as soon as June, with an initial monthly target of about a million units.

That puts Nintendo on track for assembling the new Switch consoles around July. Plenty of time for a holiday season release, or at least one leading up to the holiday season. As for whether or not it will be worth upgrading when the time comes — well, we’ll just have to wait and see the price tag.