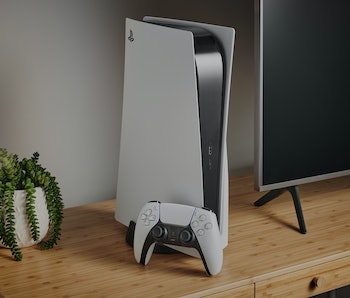 The PlayStation 5 is a work of post-postmodern art, its shiny white curves housing complex and meticulously planned computing systems. It’s also massive — there’s no way to hide its presence in your living room. And, apparently, the console was originally set to be even larger than it is now.

“When I started drawing, it was much larger even though I didn’t know what engineering was going to do, PlayStation design lead Yujin Morisawa said in a recent interview with The Washington Post. “It’s kind of funny that engineering actually told me it’s too big. So, I actually had to shrink it down a little bit from the first drawing.”

In an era dominated by extreme minimalism, the PS5’s refusal to blend in is refreshing, especially given the clean beauty of its innards. Even so, imagining the next-gen console as any larger than it already is… well, that might be too much, even for us. Sometimes more is not, in fact, more.

Did you say… larger? — The PlayStation 5 is huge. When compared to its next-gen brethren, it’s something of a chunky skyscraper, begging to be a pivotal piece of decor rather than something you hide away in a cabinet.

Right now the PS5 is almost 16 inches tall and 9 inches wide — it makes the Xbox Series X look fun-sized at just barely 12 inches tall. Now imagine, if you will, a PS5 that’s even taller than that. You’d never be able to look away from it.

I’m shaking you guys — In his interview, Morisawa also dished on the design process and his overall vision for the PS5. It wasn’t an easy process by any means, especially given the immense pressure he felt from PlayStation fans and Sony alike. At the console’s reveal, he says, the pressure was enough to make him physically shake.

That pressure paid off — Morisawa says the design is “really something beyond what we had already.” It's also going to be great for furniture makers, who will likely have orders for new TV units from people who want to tuck the PS5 out of sight, but whose current solution is too cramped (you want to give it room to breathe, after all).

The polarizing response to the PS5’s design has actually served to reinforce his design success. He says it’s actually something he wants to “achieve all the time.”

The PlayStation 5 will be released into the world in just a few days’ time. Time to start moving around the furniture so you have room for it.