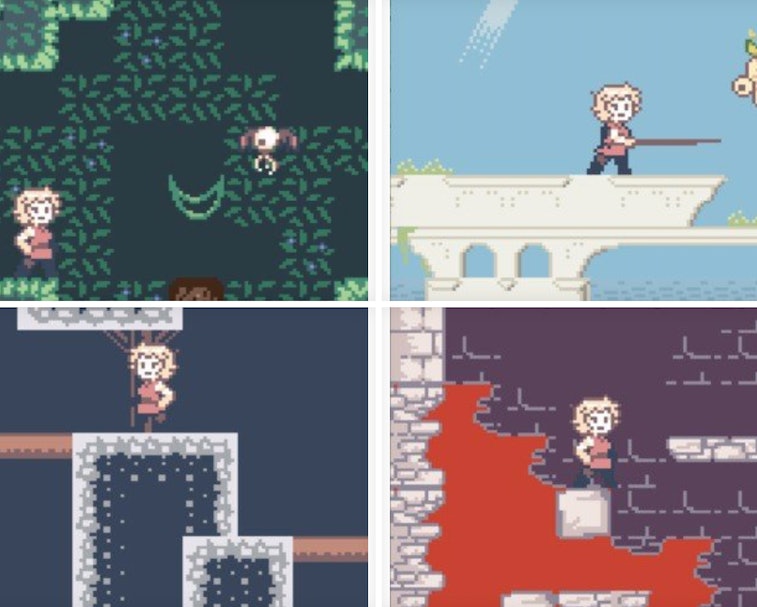 Nintendo released the original Game Boy three decades ago, but the little handheld that could isn't out of breath yet — a team of developers has unveiled a new game to be released soon. Coria and the Sunken City is a 2D sidescrolling adventure in which the heroine, Coria, "explores the caves, forests, and mountains of the mysterious Ahoe Island, uncovering an ancient mystery sleeping beneath the waves of the sea."

Coming eventually — The game is said to be inspired by the beloved series Wonder Boy and Ys, and puts you in control of Coria as you find new skills and weapons to overcome obstacles and beat enemies, with the goal of saving Ahoe Island from the horror lurking underneath it.

Team Coria, as the developers call themselves, have already released a playable demo that you can try out on a Game Boy or Game Boy Color using a flash cart like the EverDrive. You can also play the demo in your web browser using W,A,S, and D keys for direction and the letters J and K to use your sword and jump, respectively — that's kind of janky, so it's really better to play with a Game Boy if you can.

The above video is just a cinematic trailer, of course, as the Game Boy is an 8-bit handheld. But from the demo, the game looks really good. The color palette is especially pleasing. The plan is to a full version digitally and on a physical cartridge that you'll be able to buy instead of doing the installation yourself. There's no release date yet, unfortunately. The team says the demo it's released is a "proof of concept" and that there's a lot more work to be done.

Long in the tooth — This isn't the first time in recent memory that a new game has been announced for the Game Boy. Spacebot Interactive, an indie development studio, announced earlier last month that it will be shipping a new RPG called Dragonborne in January 2021. That game contains more than six hours of gameplay and Spacebot has already sold through a first pre-order run of cartridges, priced at $53 a pop. Clearly, there's still demand for Game Boy titles, even if Nintendo doesn't want to do reissues. The company is at least dropping a new Game & Watch loaded with the original Super Mario Bros.

If you don't want to play on the Game Boy's small screen we hope you pre-ordered an Analogue Pocket — a luxury clone of Nintendo's famous handheld — before it was too late.